A Mission of Preservation: A Conversation with Prof. Luo Wenhua of the Palace Museum The courtyard of the Jokhang in Lhasa. From chinadiscovery.com

Professor Luo Wenhua is a research fellow at the Palace Museum in Beijing and director of the Research Center for Tibetan Buddhist Heritage. His main area of research is in the art history of Tibetan Buddhism and the artistic relationship between China and Tibet. Since 1925, the Palace Museum has been in charge of the Forbidden City’s extensive collection of Ming- and Qing-era artifacts. Buddhistdoor Global recently caught up with Prof. Luo to discuss the center’s work in preserving Himalayan Buddhist art.

Buddhistdoor Global: You keep more than 20,000 pieces of Himalayan art at the Palace Museum. How did so many artifacts come to be stored there during the history of the Forbidden City?

Luo Wenhua: According to Qing (1644–1911) law, Tibet had to offer tributes to the Qing emperor every year. These talismans, including copper statues of the Buddha, Dharma vessels, and thangkas, constituted a very important part of such tributes. A large portion was kept in the monasteries of the imperial family, including halls inside the Forbidden Palace, for worshipping the Buddha. An amazing quantity of Tibetan talismans was kept in the Forbidden City.

In addition, the Manchu emperors paid people in the royal court specifically to paint thangkas and make Buddha statues, such as the Buddha Painting Division and the Wax Molding Division. The former was specifically responsible for painting thangkas, and the latter for making wax molds for casting copper statues of the Buddha. The two workshops and the Imperial Workshop Division worked together for the royal court to manufacture Dharma vessels, which are now also an important component of the Tibetan Buddhism collections of the Palace Museum. 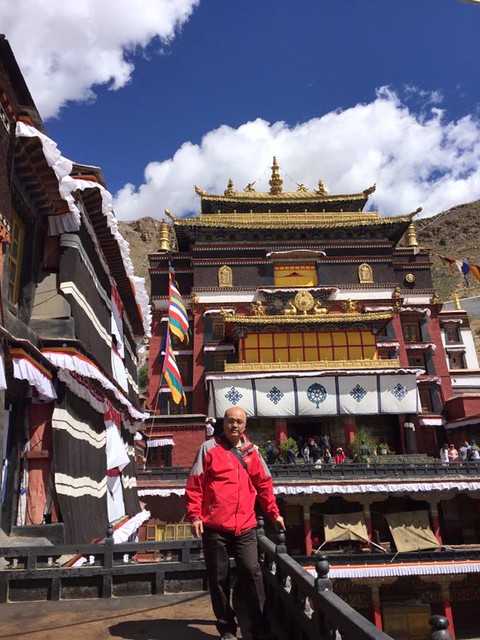 Luo Wenhua at Tashi Lhunpo Monastery in Shigatse, which was founded in
1447 by the 1st Dalai Lama. Image courtesy of Luo Wenhua

BDG: When did your team first become involved in the preservation of Tibetan Buddhist art?

LWH: There are plenty of Tibetan cultural relics, yet most of them are stored inside monasteries, unknown to the outside world.

The Palace Museum and our research institute have been conducting investigations and research on cultural relics of Tibetan Buddhism since the late 1990s, with the intention of using our efforts to assist temples in the Tibetan area to have a better understanding of the historical and artistic value of the sacred objects they possess, so as to avoid the current situation of these sacred objects being stolen, destroyed, or neglected.

Murals inside Tibetan Buddhist monasteries in particular suffer from human-made and natural damage, and are becoming unrecognizable or even disappearing. Digitizing technologies can help preserve their information, effectively forever, and also provide basic information for the conservation of those temples’ cultural relics. Permanently preserving the true appearance of these murals will facilitate future research and exhibiting. Mural inside the Jokhang. Image courtesy of Luo Wenhua

BDG: At the moment, you are leading a team to digitize artifacts and wall paintings in Tibet. Why did the Palace Museum and the Research Center for Tibetan Buddhist Heritage decide to undertake this project in 2013?

LWH: In 2013, upon obtaining private sponsorship and the approval of the Jokhang [in Lhasa] as well as that of the Bureau of Cultural Relics of the Tibet Autonomous Region, we started the work of naming, cataloguing, and dating the cultural relics of the Jokhang and, at the same time, carried out high-definition photography to assist the temple in establishing a complete database of its collections. With the blessing of Master Lhabab, deputy director of the Temple Management Committee of the Jokhang, our working group was given formal permission to assist in sorting its collection of cultural relics. This was the beginning of our first project in Tibet. BDG: To accomplish this project you have visited some important temples in Tibet. They are: the Jokhang, Gongkar Chöde Monastery, Reting Monastery, Ganden Monastery, Zongdag Lukhang, and Drepung Monastery. Aside from the obvious historical importance of these sites, why did the Research Center for Tibetan Buddhist Heritage choose to digitize Buddhist art at these temples and monasteries?

LWH: The Jokhang is one of the earliest temples in Tibet. It keeps a few thousand copper statues and talismans, as well as murals from the 11th or 12th century. Its architecture hearkens back to the 7th century, and it is a timeless symbol of Tibetan Buddhism.

Gongkar Chöde Monastery was built in 1464. It’s the ancestral temple of the Gongkar branch of the Sakya school. More importantly, its murals are the only remaining works of the Chintse tradition, an important school of Tibetan painting.

Reting Monastery is an important monastery of the early Kadampa school in Lhasa District, which owns thangkas and copper statues dating back to the 12th and 13th centuries.

Zongdag Lukhang is a temple built probably during the time of the 6th Dalai Lama [1683–1706] on a pond that was formed during the construction of the Potala Palace at the time of the 5th Dalai Lama. It’s a three-story temple, with 17th-century murals preserved on its second and third stories, including paintings with notable features of the Nyingma school that record stories of Padmasambhava’s life and yogic practices.

Drepung Monastery, built around 1416, is an important monastery for the Gelug school. There are still murals of the early 15th century in the circumbulary pathway of the monastery’s sutra-chanting hall. These provide us with very precious information. An 8th century silver flask from the Jokhang. Image courtesy of Luo Wenhua A 16th century mural of one of the 16 arhats, Gopaka, in the Jokhan. Image courtesy of Luo Wenhua

BDG: What are some of the common technological challenges to digitizing murals and sculptures?

LWH: There are two difficulties associated with digital shooting. First, there are plenty of furnishings inside the temples, making it difficult to position our equipment. And some places are cramped and small. Second, Tibetan Buddhist mural walls often reflect light, and the glare makes the angle of the shooting light extremely demanding.

Sculptures in Tibetan temples are usually erected with their back close to the wall, with almost no space for the camera to move in deep. How to shoot the most complete image is a difficult problem yet to be solved.

BDG: Which artifacts or murals have been the most difficult to preserve?

LWH: In Tibetan monasteries, there are some thangkas from earlier times that are enshrined as the most sacred objects. Whenever an important event takes place, the monastery will smear golden fluid on their surfaces. As a long-established tradition, the practice has damaged the thangkas beyond recognition, and they will be hard to recover in future. One or two thangkas kept at Reting Monastery have been damaged like this.

BDG: In 2017, the team will set out to work on digitizing art at Qutan Temple in Qinghai. What do you foresee work to be like there?

LWH: Our work at Qutan Temple is mainly to digitize the murals of the Ming and Qing dynasties kept at the monastery, its cultural relics, and its buildings. At the moment we have begun only the first phase. We will also set up databases for these texts. The databases will be installed at the Palace Museum and the Qinghai Institute of Cultural Relics. The three parties will jointly conduct research, publishing, and exhibition work. BDG: Overall, how would you evaluate the progress of the digitization project?

LWH: It’s very difficult to do digitizing work in the Tibet Autonomous Region. It isn’t merely an academic or a technical issue. More importantly, we need to maintain communication with the local authorities, the cultural relic departments, and the monasteries. We are balancing the interests of everyone.

When working at monasteries, our personnel must maintain close and frequent communication with the monastery management, strengthen mutual understanding, respect religious sensibilities and demands, and uphold the customs and culture of Tibetan Buddhism. Therefore, when we work on relic conservation in Tibetan monasteries, we face factors that are more complicated than doing similar work in other places.

As a whole, our projects are proceeding quite smoothly, and have the support of government authorities and monasteries in the Tibet Autonomous Region.