Visitors to India today are struck by the startling diversity of ancient Buddhist sites. Some sacred places, such as Bodh Gaya, are thronged daily with thousands of tourists and pilgrims from around the globe, while others, tucked away in villages, are virtually deserted, such as Sirpur in central India. Geographically, the variety is no less extraordinary, from Pakistan’s remote mountain ranges to the rolling farmlands of Karnataka and Andhra Pradesh states. Some holy sites are famous for imposing freestanding monuments faced in stone, such as the Great Stupa at Sanchi, while others are carved within isolated cliff sides, such as Ajanta in western India. The time span of Buddhist sites is no less striking, beginning from the days of Emperor Ashoka (r. c. 269–c. 232 BCE) and running to the Pala dynasty’s demise in eastern India with the advent of Islamic rule in the 13th century. In light of such unparalleled diversity, we are right to enquire whether trends, patterns, or enduring core principles characterized this long period of Buddhist art or even if they can be discerned.

Despite the thousands of surviving monuments, the cold stones and bricks cannot speak to us about the beliefs, rituals, or daily life of the monastic community, or sangha, and lay practitioners. Some donors’ inscriptions reveal their aspirations, but the information is too sketchy to form many meaningful conclusions. For example, two epigraphs at the celebrated Kanaganahalli stupa record that sponsors hoped their donations would “prolong (their) life span” and “honour all Buddhas, our parents and contribute to the happiness of the whole world” (von Hinüber and Nakanishi 2014, 28, 34). The many hundreds of inscriptions found in Mathura, Sanchi, Bharhut and other sites throughout the subcontinent also provide little specific or extended information about religious beliefs or rituals. It is no wonder, therefore, that scholars turned long ago to Buddhist texts to fill in the enormous gaps. 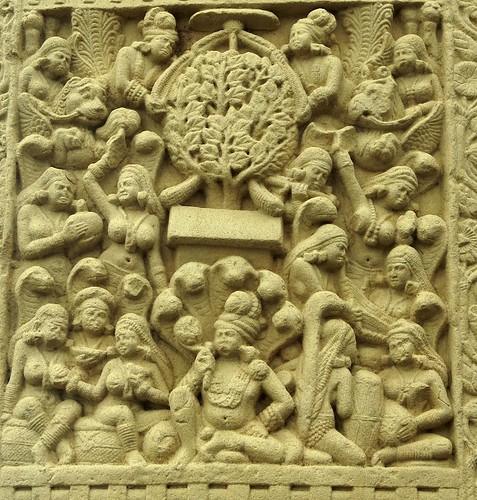 Ancient scriptures in countless numbers were composed in Pali, Sanskrit, and even a special language known as Buddhist Hybrid Sanskrit. Some texts posed lofty philosophical questions while others drew upon the colorful legends of the Buddha’s life, his family, and disciples. Yet other texts detailed the “dos and don’ts” of everyday monastic life. Written largely on perishable palm leaf, very few original scriptures survive, and most that do are from later periods. Moreover, the date, authorship, and provenance of the texts are usually unknown, further hampering a better understanding of the evolution of Buddhist thought and ritual. 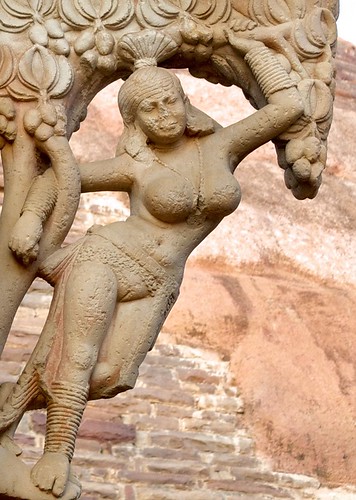 Relating information gleaned from Buddhist texts to actual monuments has for decades tantalized archaeologists, Buddhologists, and art historians. Although much ink has been spilled, the results have been mixed. Basic questions still scream out for answers. For example, was the lay community encouraged to worship at monasteries? Did meditation occur in monasteries, or was devotion mixed with activities such as lighting candles and chanting prayers? Did monks practice a rigorous ascetic life or enjoy a lifestyle comparable to well-off members of the laity? Were stupas under active worship, and if so, was it on a daily basis or only on special occasions? Were specific rituals prescribed at them? What was the purpose of narrative sculpture, such as Jatakas (stories of the Buddha’s previous lives)? What is the context of the overtly sensuous sculptures at some stupas, such the female “spirits” or yakshis figuring so prominently on the gateways at Sanchi? The list of unanswered but fundamental questions goes on and on. The only arena for which much information is available is the funding mechanism for monasteries, since stone inscriptions provide hard evidence; but even here, more questions arise. For example, monks and nuns sometimes sponsored the creation of Buddha statues; but how did they acquire such wealth, or was it funneled through them by lay donors? The answers to these questions will inevitably vary sharply between regions and over time, making broad generalizations tentative, if not impossible. It is into these uncharted waters that Lars Fogelin has bravely sailed, attempting to populate these deserted Buddhist ruins with live people whose beliefs and rituals he has reconstructed on the basis of texts and the monuments themselves. The book’s fundamental shortcoming is that its conclusions are supported by too little firm evidence. Without evidence, one is forced to rely too heavily on conjecture. This is not to dismiss conjecture. Indeed, all important scholarship is conjecture, but it must be based on carefully weighed evidence. Also, the book suffers from far too many unnecessary references to general theories about religion and society. The result is a cornucopia of jargon which conceals conjecture in a convincing mantle of certainty. Headings within chapters convey the gist of this theoretical direction: Structural Approaches to Religion and Ritual; Does Religion Exist?; The Incoherence of Religion and Symbols; Signs and Semiotics. Many modern readers will feel comfortable with this approach, but it is a poor substitute for the application of common sense to the facts. Several examples will suffice. For instance, it is claimed that beyond the circular stone railings of the stupas at Bharhut, Sanchi, Kanaganahalli, and Amaravati there was a “large courtyard where larger group rituals could be performed” (p. 116). Not only is there no archaeological evidence for such large courtyards, but it is pure conjecture to speak of “group rituals.” Or, speculating about the brick walls surrounding certain complexes at Nalanda and other centers in eastern India, the author surmises that “ . . . whoever was allowed in or out [of the complexes], the ability of the sangha to control access to the major monasteries . . . represented a significant change in their power” (p. 217).

More theorizing concerns the practice of circumambulation, or pradakshina, of stupas or sacred objects. This rite is prescribed in certain Buddhist texts and worshippers are shown performing circumambulation in some narrative sculpture, but there is no concrete evidence to suggest that this ritual occurred at early Buddhist sites or that it was widespread. The author is scarcely alone in this belief about circumambulation at early Indian Buddhist sites, but it is precisely these conventional modes of interpretation that need re-evaluating. 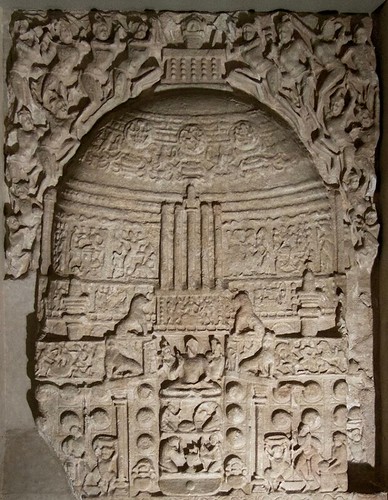 Since Fogelin has cast his net over the entire ancient subcontinent, a certain number of minor oversights have inevitably crept into his account. For example, in imagining the missing superstructures of major temples in eastern India, such as Somapura, comparisons are made to the temples of Pagan, Burma. Fogelin concludes that these temples would have resembled “a highly attenuated stupa” (p. 215). However, the large Pagan temples were never designed to resemble stupas but always crowned with north Indian-style superstructures, which had no architectural or religious association with stupas. Learned readers will surely spot other errors. 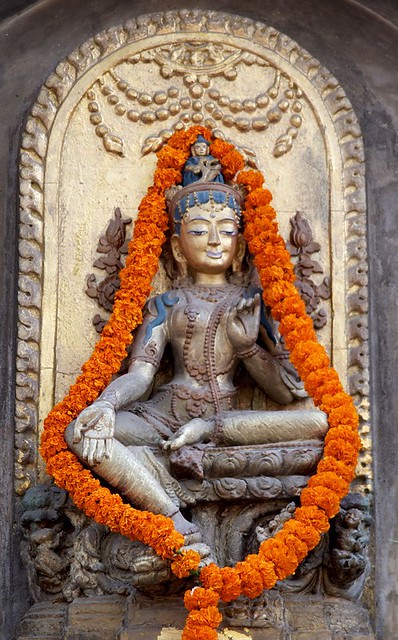 The author must be congratulated for attempting such an ambitious study. That each of the many hundreds of Indian Buddhist monuments has a story to tell is an underlying theme of the book. How we reconstruct their stories must be carefully based on convincing evidence. Despite these quibbles, this book merits a place on the shelves of all those interested in Buddhist thought and art.

An Archaeological History of Indian Buddhism, by Lars Fogelin, was published by Oxford University Press in 2015.