Newly ordained nuns assemble with the abbot of Ri Yue Chan Temple in front of the main gate. Image courtesy of the author

The monastic ordinations performed in Taiwan are renowned among the sanghas of the various Buddhist traditions for being extremely rigorous. The Chinese practice entails long periods of standing to recite sutras and mantras and to listen to Dharma talks, as well as a great deal of bowing and kneeling during repentance practices. The Triple Platform Ordination, incorporating novice, ordained monastic, and bodhisattva precepts, is very highly respected.

The particular ordination ceremony in which I participated was sponsored by the Buddhist Association of the R.O.C. and held at Ri Yue Chan Temple in the city of Kaohsiung over 35 days, with 150 male and 350 female candidates from 18 countries.* The occasion was obviously the result of many years’ experience in conducting this type of large-scale ordination, and was carried out with characteristic Chinese order and efficiency—I could not help but admire the competency and organization of this complex event, with its diverse activities and programs.

As a native English speaker (currently based in northern Thailand), among the initial challenges for me personally were adjusting to the Chinese language and culture, and interacting and communicating with people from a great many different cultures and backgrounds. Fortunately, a very kind Taiwanese nun who had lived in the United States for many years stepped forward to assist with translating the various classes and teachings into English.

We were accommodated in large dormitories, with up to 70 women living shoulder-to-shoulder, sleeping on soft cotton mats, and with only enough personal space for a suitcase. This presented a challenging adjustment for those of us accustomed to exercising a greater degree of personal preference, such as whether or not to turn on a fan, or what, if anything, to do about fellow candidates who talked during rest periods or late into the night. The definition of sangha was explained as: “doing the same thing, at the same time, together in harmony,” and the schedule and living conditions were a proving ground of one’s ability to surrender to that and let go of any sense of attachment to individual preference. It became very clear how this kind of life builds a deep mindfulness of one’s impact on others, as the smallest noise or movement can affect many others in such an environment. One day at lunch the vice-abbot asked us: “Are you making your neighbor happy? It’s getting cold, so if you see someone without covers, help them by putting a quilt over them.” This kind of awareness of others has a wonderful effect of eradicating self-cherishing and preoccupation with one’s own needs.

Despite the strict discipline and demanding schedule, the supervising shifu (masters), who had come from other monastic communities to assist with the ordination, were extremely kind, going out of their way to take care of us. We often heard it said that they were there to assist each and every participant in completing the ordination successfully and safely. As the days went by, the reason behind the choice of the word “safely” was to become much clearer.

The intensity of the practice, the demanding schedule, and the very nature of preparing oneself to take vows to serve and benefit others seemed to bring on a great many karmic obstacles, which often manifested in the form of emotional and physical ailments. Some participants developed serious health issues and toward the latter part of the schedule, a doctor was even made available throughout the day because so many people were falling ill: many came down with flu symptoms and chest congestion, while others experienced more severe ailments. Some of the more serious cases included pneumonia, high blood pressure, a brain tumor, and a heart condition. All were treated with great kindness by the many volunteers who were there to help them complete the ordination.

The masters conducting the ceremony

The three primary masters, Senior Ven. Ching Hsin, Senior Ven. Yuan Tsung, and Senior Ven. Pen Ching, all aged between 80 and 90 and each with more than 60 years’ experience of monastic life, were extraordinarily kind and diligent in facilitating the entire process. Such ordinations are among their primary responsibilities, even though each of them is an abbot of his own monastery and plays a major role in the Buddhist Association of the R.O.C. All three worked tirelessly for long hours, with an extraordinary spirit of care for all the participants, and did not hesitate to share stories of the health issues and other obstacles that had arisen during their own ordination. 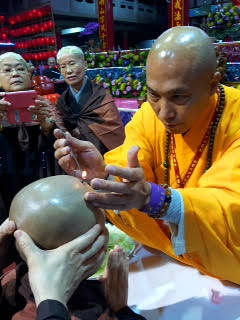 Incense burning on top of head,
symbolic of offering body to all beings.
Image courtesy of the author

Each day consisted of morning study sessions to learn the rules of conduct and precepts for the three stages of the ordination, with different masters giving the teachings. The novice ordination and the bhikshu/bhikshuni ceremonies each involved very strict protocols, with groups of three candidates appearing before 10 witnessing masters to reply to questions posed in Chinese. This process took place twice for the bhikshuni candidates, who had to appear before both a council of bhikshus and a council of bhikshunis.

At one point, a group of us from various schools of the Tibetan tradition requested an audience with the abbot of Ri Yue Temple as we had questions concerning our tradition and Chinese ordination. Both the abbot and the Karma Acharya met with us to offer encouragement, reassuring us that His Holiness Dalai Lama had sent many nuns from the Tibetan tradition for ordination in Taiwan. The masters also said we should not be concerned about ordaining in a different tradition because afterwards we could confidently return to our own practice, tradition, and robes.

One particularly striking feature of the ceremony was what was described as “the precept body”—an energetic transmission the seed of which was said to reside in our alaya-vijnana (“storehouse consciousness”), thus generating an aspiration to live a monastic life for many lifetimes to come. During the ceremony we were encouraged to focus our minds on a massive cloud of Buddhas and bodhisattvas gathering above our heads. The blessings were transmitted by the masters and internalized by the candidates based on the purity of their intention to receive and honor the precepts. It was a profound and deeply life-changing experience. 500 participants after completion of ceremony with witnessing masters. Image courtesy of the author

The entire ordination was supported by many generous donors, who provided robes, shoes, alms bowls, medicines, and other items, and a great number of diligent volunteers who awoke early each morning to prepare food for everyone. The efforts of the various masters and teachers, who demonstrated incredible dedication in the kindest possible manner to facilitate the safe and successful culmination of the Triple Platform Ordination, were received by the participants with tremendous gratitude. Afterwards, we were each presented with a “passport”—beautiful booklets that certified our level of ordination, with details of the time and place and the names of the masters and witnesses.

I know I shall always cherish the encouragement and kindness we experienced during the ceremony, and I will aspire to reflect that in my actions as a bhikshuni. One teaching that we heard repeatedly throughout our time at Ri Yue Chan Temple was: “Don’t teach with words; teach through your behavior.” The senior monastics who supported us were all extraordinarily inspirational examples of that teaching.

* The next such ordination is scheduled for 1 November–30 December 2016. Full ordination for nuns presently exists only in the Chinese tradition, so many nuns from other traditions who have already taken novice ordination participate in these ordination ceremonies in order to become bhikshunis. The English-language email contact for prospective candidates is: syg012019@gmail.com.