Book Review: Love and Rage: The Path of Liberation through Anger Lama Rod Owens is a Buddhist teacher officially recognized by the Kagyu school of Tibetan Buddhism. He also holds a Master of Divinity degree from Harvard Divinity School and is co-author of the book Radical Dharma (North Atlantic Books 2016). Known for his social activism and his ability to apply the Dharma to very real and contemporary issues, Owens has also made significant contributions to the areas of secular and engaged Buddhism. With the global health crisis highlighting the racial inequalities of our current systems, and amid worldwide outrage toward state-sanctioned violence against Black people and people of color, Owens’ ode to anger could not have come at a better time. Published on 16 July, Love and Rage: The Path of Liberation through Anger (North Atlantic Books 2020) provides us with powerful insights and tools to navigate these chaotic times. 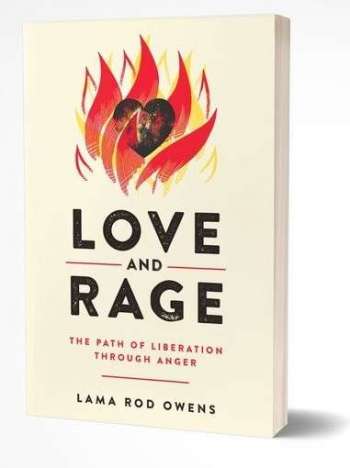 That said, if you have picked up Love and Rage in the hope of experiencing the comforting, warm and fuzzy feelings that so many books about Buddhism and mindfulness offer, let me start off my saying that this is not one of those books. Firstly, in order to experience any of the wisdom offered by Lama Rod Owens, the reader will have to do some work. Love and Rage features a variety of contemplative practices that are aimed at developing self-awareness as well as self-compassion. Excitingly, the book reflects Owens’ manner of teaching in that it is a real smorgasbord of practices: derived partially from his training in Tantric Buddhism, the practices are also inspired by other areas of his life. For example, when it comes to the Buddhist practice of taking refuge, Owens uses a combination of the traditional sources of refuge—such as Buddhist teachers and scripture—as well as more contemporary sources of refuge. As readers, we are advised to use what works for us, and this can include drawing on inspiring words from our favorite movies and TV shows and calling upon wisdom figures such as Beyoncé and Michelle Obama.

Another aspect that makes this a challenging read is that we are encouraged to deeply investigate not only the anger within, but also the systems that, for many people, have given way to that anger. Owens is a social activist as well as a Buddhist. He is a Black American and a gay man, and his book is an authentic expression of the heartbreaks he has experienced by simply existing within the stratum of society which he inhabits. To put it in his own words: “This is a book that comes out of where I am: Black, queer, cisgender, and male-identified, fat, mixed-class, Buddhist teacher and minister, yoga teacher, and shit-talking Southerner, among other identities.” (3) It is precisely because Owens embodies all these identities that he is so well placed to address the path of liberation and love through anger. Doing the work, however, requires a commitment to seeing things as they are.

According to Owens, we have all been conditioned in different ways to relate to anger and rage (two terms that he uses interchangeably). And the reality is that the system of white supremacy, which has been in place for centuries, has made it incredibly dangerous for Black people to express—let alone experience—anger:

Lama Rod Owens is pissed off, and he is all the more pissed off that his anger is not taken seriously. He describes in depth the injustice of this reality: as a descendant of people who were kidnapped from the African continent and consistently brutalized and disembodied—first through centuries of slavery and then through systemic racism—he shares a trans-historical trauma that has a right to be fully acknowledged and loved. The same goes for the rage that lives side by side with the trauma.

Even in Buddhist communities, anger is often seen as something that needs to be suppressed. Indeed, Owens points out that there is a widely held belief within these circles that there is never a place for anger and there is never a place for violence. Yet in promoting this belief, Dharma spaces perpetuate the same system of oppression that controls and polices the bodies of Black people and people of color, among other subjugated groups. Drawing from an interview he gave as part of the series U Mad? hosted by the Buddhist Peace Fellowship, Owens writes:

That’s not actually taking into account the very real and different realities that different bodies are living. There’s a point of anger being triggered for me when I think, ‘How dare people tell me how to survive when they have no idea what it means on a relative level to inhabit this particular body.’ And I’m ok with saying that, being very clear about that; that’s what I’m known for. (42)

Despite the numerous ways in which white supremacy has harmed Owens, his ancestors, and his peers, he is here to show us that it is possible to be angry and to love simultaneously. By the very fact that he has survived a system that seeks to destroy him, Owens and countless others have embodied what true healing looks like and this is beautifully expressed in the following passage:

When I experience rage, I understand that I am experiencing the rage of all my ancestors. When I experience love, I am also experiencing the love of all my ancestors. It is the transhistorical love that is often felt as resilience that keeps me and many of us alive; and when we fall deeply into the love that we are being gifted, then we begin to thrive, and it is that thriving that begins to disrupt systems of violence that were only created to annihilate us. We disrupt these systems because we survive the system, summon our joy, and dance into our thriving. A system of violence that does not kill us has failed. I am my ancestors’ wildest dreams because I thrive. (244)