Buddhism in the West is sometimes represented as a “white” phenomenon, as increasing numbers of ethnic Europeans on both sides of the Atlantic embrace the Buddhist way of life. But this portrayal ignores over half the story; the majority of Buddhists in the West are Asian immigrants and refugees who have transplanted their Buddhist faith into Western soil. These temples often fly under the radar of popular media, and remain a quiet, even hidden, presence in the Western Buddhist landscape.

A case in point: nestled in the hills on the northeastern outskirts of Oslo lies Khuong Viet Temple, the flagship institution of Vietnamese Mahayana Buddhism in Norway. I had the privilege of visiting the temple with my family in November 2015 for the observance of the Medicine Buddha’s birthday. As we pulled into the parking lot outside the two-story temple building, I experienced a strange mixture of excitement and apprehension. When I first contacted the temple several weeks earlier, I learned from one of the monks that there were no non-Vietnamese members and that Buddhists of European descent only rarely visited. Indeed, this was one of the main reasons for my visit; I was keen to explore the boundary between “ethnic” and “Western” forms of Buddhism and to see if I could stumble upon some insight that might help to illuminate the apparent divide. In the case of Khuong Viet Temple, one answer was obvious: history. Like many Vietnamese communities in the West, the sangha in Norway was born of the desperate plight of the boat people to escape Communist oppression. As part of the Unified Buddhist Church of Vietnam (UBCV), the sangha here are followers of Thich Quang Do, the Church’s revered patriarch, who lives in near-perpetual confinement at Thanh Minh Zen Center in Ho Chi Minh City.* His opposition to the Catholic-chauvinist policies of the Diem government, and later to the crackdown on religion by the Communist regime, made him a national hero. But it was his numerous show trials, stints in prison, and prolonged periods of house arrest that made him an icon among the Vietnamese diaspora. Ever mindful of the oppression of their brethren back home (the UBCV is officially banned in Vietnam), the religious freedoms enjoyed by the UBCV sangha in Norway are not taken for granted. This was clearly an important ingredient in the cultural glue of the temple.

“In Vietnam, you cannot even give a Dharma teaching,” said Thich Vien Ngo, head monk of Khuong Viet Temple and head of the Vietnamese Buddhist Sangha in Norway. We sat on the floor in the temple’s shrine room as the afternoon sun flooded in through high windows. “Everything that is said must be controlled by the government. That is why when Thich Nhat Hanh visited Vietnam in 2007, the government had to control everything he said about Buddhism.”

When I mentioned that Thich Nhat Hanh was the first Buddhist teacher whose books I read, as a teenager, Thich Vien Nhan, the 17 year-old monk who was my host for the day, spoke respectfully of the beloved teacher. “We listen to him, we respect him, and we have received what we need to from his teaching; he is an inspiration. He teaches a slightly different direction of practice than we do, but there is a great deal of overlap.” (It should be noted that Thich Nhat Hanh is not affiliated with the UBCV but heads the Unified Buddhist Church, a global sangha based in France.)

I was impressed by the diplomacy of the young monk, especially given his order’s criticism of Thich Nhat Hanh’s omission of a statement of support for the UBCV during his visits to Vietnam in 2005 and 2007. It brought home to me the fact that, in any ethnic sangha, there are historical and political complexities not immediately apparent to Western Buddhists, who in this case might visit Khuong Viet Temple with ill-informed assumptions about some non-existent, monolithic entity called “Vietnamese Buddhism.”

By this time, the lay members of the community had begun to file into the spacious shrine room and find their places for the service. If I had felt any anxiety about my family and myself being seen as outsiders, it soon abated in the warmth of the many smiles we received from the monks, nuns, and laity as they assembled. As a Western Buddhist, I was also curious about any tensions between the Vietnamese sangha and the dominant European culture. I knew from my own experience, as a Midwestern American raising a family in Norway, that a host culture’s sway on one’s children can be a complicated issue. In this regard, when I asked how effective the temple was in transmitting Buddhism to Norway’s Vietnamese youth, Thich Vien Ngo’s voice grew softer, more pensive.

“Of course, the Vietnamese youth who have grown up in Norway are influenced by Norwegian culture. But we hold on, and work to get them into the temple by sponsoring many activities for young people. We teach them how to practice meditation, and how to practice in the temple—how and when to ring the bell and the gong, for example—and let them taste the life of practice, the life of a monk or a nun. We also teach them Buddhist songs.”

Thich Vien Nhan, himself a Norwegian-raised member of the millennial generation, chimed in: “Most Vietnamese youth are very integrated into Norwegian society, and there are differences between Vietnamese and Norwegian culture. Norwegian society is much freer, and Vietnamese culture is more conservative, so it can be difficult to get the youth [who have grown up in Norway] interested in Buddhism. But we persist in teaching them about the Buddha so that his story engages their imagination.”

At this moment, Venerable Vien Ngo’s phone rang. As he walked across the shrine room to take the call, Thich Vien Nhan explained to me that the growing community is building another temple in the Jessheim suburb of Oslo, which will be dedicated to the bodhisattva of compassion, Quan Am (Ch. Guanyin; Skt. Avalokiteshvara). Thich Vien Ngo was speaking with the Vietnamese artist who was designing a large statue of the bodhisattva for the exterior of the building. 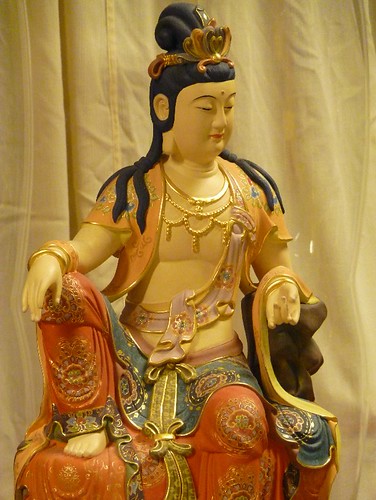 “Quan Am is very important for Vietnamese Buddhists,” said Thich Vien Nhan reverently. “She is the nearest and most familiar bodhisattva.” I was struck by his seriousness. Clearly, whatever struggles the community might be experiencing with the influence of the dominant culture, the way of Mahayana devotion had been successfully transmitted to this second-generation member of the Vietnamese diaspora.

It was almost time for the service. Ven. Vien Ngo and Ven. Vien Nhan excused themselves, and we settled in for the hour of sutra chanting that was to follow. The chanting was all in Vietnamese, which was also the dominant language spoken at the temple. In spite of the fact that both monks spoke Norwegian and English during our interview, it seemed that the temple vernacular would be a formidable obstacle for any non-Vietnamese wishing to attend on a regular basis.

This also begged the question of whether it is desirable for anyone that this state of affairs change. After all, there are a number of Mahayana Buddhist groups in Norway that are either partially or mainly Norwegian in language and membership; why shouldn’t Vietnamese Buddhists have their own space in which to be linguistically and culturally Vietnamese? Or does such a status quo continue to divide Buddhism along ethnic and linguistic lines? Whose responsibility is it to accommodate and adapt? And who decides? These are difficult questions, which will only be answered with time and the continuing interface of Asian Buddhist communities in the West with the surrounding culture.

As my family and I ate a delicious meal of vegetarian fried rice served after the service, I recalled Ven. Vien Nhan’s words: “All are welcome; we turn no one away.” It was then that I remembered one of the most extraordinary things about the temple’s shrine room: in addition to statues and scrolls in the Vietnamese style, there was an abundance of Tibetan statues and thangkas [scroll paintings]—an unusual feature for any East Asian Mahayana temple. When I asked Ven. Vien Ngo about it, he smiled and shrugged. “Tibetan art is nice,” he said. “We thought it was beautiful, so we bought it.” For me, this moment seemed to clarify the question of this immigrant temple’s stance toward non-Vietnamese Buddhists and Western culture: All are welcome. Be who you are, and we will be who we are. You may learn from us, and we may learn from you. If there is benefit and virtue in it, let us borrow freely from one another. Without coercion of any kind, let us joyfully practice the Buddha’s Dharma together!

I could not help but find this attitude deeply inspiring. Whatever cultural and linguistic divides may exist between this ethnic Buddhist community and myself as a Westerner, I now feel as if I have discovered a bridge—and I know that I will be back. * http://www.queme.net/eng/thichquangdo.php (Que Me - Action for Democracy in Vietnam)