A mosque was set on fire in New Delhi this week by Hindu mobs. From aljazeera.com

As we embark into the third decade of the 21st century, we find ourselves in a time of not only extraordinary wealth, comfort, and advanced technology, but also continuing inter-communal and inter-religious violence, assaults on freedom of the press and other democratic institutions, and a general dissatisfaction with life. This week in India, the birthplace of Buddhism, inter-religious violence erupted in New Delhi as mobs of Hindus attacked Muslims in an outbreak of brutality that some are comparing with the 1984 anti-Sikh riots in which 3,000 people were killed. The scene there, and in many places around the world, is worrying. A man surveys the aftermath of recent violence in New Delhi. From foreignpolicy.com

At the same time, an important aspect of the progress we have experienced in recent decades includes a flowering of interfaith dialogue: opportunities for religious experts, leaders, and laity to share their faith and understanding of practice in a context that allows them to bear their hearts and to reach out to the “other” in the discussion. Could more dialogue, in greater regularity and different contexts, be a key to a more strongly secured peace in the world? What barriers might exist for this to take place?

A common barrier to rich interfaith dialogue comes from efforts to overly define, and perhaps even essentialize, religious boundaries. This is a byproduct of the often very wonderful intellectual practice of tracing histories and contexts for certain words, doctrines, rituals, and institutions. But definitions can become rigid, preventing engagement with an ever-changing world, and preventing deep contact with people around us who—we will see—are just like us, despite carrying different labels, be they Buddhists, Christians, Muslims, Hindus, Jews, atheists, or otherwise. In fact, if there is one thing that Buddhists will agree upon (at least most), it is the lack of essence—expressed in the Pali term anatta and the Sanskrit anatman or sunyata—of all things.

American scholars of Buddhism Courtney Bender and Wendy Cadge put it like this:

While some scholars conceive of religions as intact traditions with clear boundaries, distinct ideologies, and unique histories, other scholars, primarily in sociology and religious studies, have long known that these conceptions fall apart under close scrutiny. . . . Religious traditions develop and exist, these others argue, in relation to one another. Religious conflicts and polemics reformulate and solidify boundaries between traditions. The movement of religious traditions into new contexts reshapes their borders and meanings, and contact and interaction in plural worlds often lead to religious hybridization and other kinds of incorporation . . . (Constructing Buddhism(s): Interreligious Dialogue and Religious Hybridity 229)

The phrase “close scrutiny” should remind Buddhists of practices such as careful, wise attention (Pali: manasikara) or seeing clearly (vipassana), though each of these has special use and designation for practitioners. Nonetheless, as one practices meditations taught in the Buddhist tradition, some of the clear boundaries we had thought were real begin to disappear, some of our tightly held ideologies become fluid or “let go” altogether, and the “uniqueness” of our histories dissolves into the countless intricate interactions and interconnections we discover with the world and people around us.

We, as Bender and Cadge rightly say of religious traditions, develop and exist in relation to one another. And who we are is shaped and reshaped through new contacts and interactions. Over the years, a number of influential Buddhist leaders have helped guide this development, in particular as the Asian world and European and North American societies have become elaborately intertwined. Through them, we have seen that it is possible to live one’s religion fully and to engage in dialogue with members of other religions. 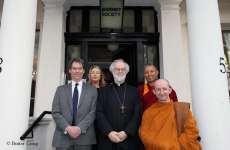 Buddhist leaders meet with then archbishop of Canterbury Rowan Williams in 2012. From thebuddhistsociety.org

The Dalai Lama leads a discussion on diversity in the Muslim world. From dalailama.com

In fact, interfaith dialogue can be its own path into the depths of one’s religion. In particular, for Buddhists, these dialogues can be a chance for breaking down barriers between oneself and others, a sort of lived compassion and loving-kindness. It also reminds us of the fundamental truth—mentioned above—of non-self, as well as impermanence as we see ourselves learn and grow in unexpected and unpredictable ways.

Buddhadasa Bhikkhu (1906–93), a famed Thai monk and scholar developed principles of interfaith dialogue based explicitly in selflessness, interdependence, and nonattachment. Taking an understanding of these as key to one’s Buddhist growth and development, one can see how positively transformative interfaith dialogue can be. His Holiness the Dalai Lama has appealed to Buddhists and others to come together under the realization that we are all born and nurtured by our mothers. Simple, grounded truths like this help us see the “other” before us not as an “other” but as a fellow human being on a mutual path, despite our differences. These truths also help us move beyond the excesses of certain scholarly thought that solidify division and difference.

The work is not always easy. It requires deep inner attention: What is my belief on this matter? What is my understanding of my religion, and my reason for taking it up and continuing it each day? But in taking up these inquiries, in a community of fellow questioners, we find our sangha grow not just spiritually but physically as we find ourselves at home with people around us of different religions. As Rev. James Ford, Roshi, points out, we find what was taught by the Buddha to Ananda in the Upaddha Sutta (Ford’s adaptation):

One day while walking quietly together, out of the silence the Buddha’s attendant Ananda declared, “Teacher, to have companions and comrades on the great way is so amazing! I have come to realize that friendship is fully half of an authentic spiritual life. They proceeded along quietly for a while more, before out of that silence the Holy One responded. “No, dear one. Without companions and comrades, no one can live into the deep, finding the true harmonies of life, to achieve authentic wisdom. To say it simply, friendship is the whole of the spiritual life. (Patheos)

Today more than ever, with our lightning-fast communication and proliferation of global travel, we cannot escape the reality that we must work together to make this a better world for the generations to come. That requires both looking deeply within, using the tools, practices, and communities of our own religion, and looking around us for those who exist beyond our known boundaries of faith. These practices have the potential to deepen our own individual development and deepen our bonds with those around us. This is not only a worthy goal of Buddhist practitioners today, but for all people of all faiths. So let us hope that in the years to come we all can commit and re-commit to finding our home, both spiritually and materially, in interfaith dialogue.

ZEN & THE WEST: Nearly Random Thoughts on Clerical Marriage in Buddhism, Women teaching, and the Rise of Householder Zen (Patheos)

Interview with Ana María Schlüter Rodés, Founder of Zendo Betania
Interview with Abraham Vélez de Cea About the Buddha’s Outlook Toward Other Religious Traditions
Inter-religious Dialogue: Are Buddhists Doing Enough?
Dialogue Between Buddhism and Christianity is More Urgent Than Ever
When Catholics Reach Out: Perspectives of the Order of Discalced Carmelites on Dialogues with Buddhists
Reflections on Harmony: Ven. Hin Hung on Buddhism and Interfaith Relations