As the COVID-19 pandemic began to sweep across the planet in February this year, Buddhist teachers and Dharma centers responded with cancelations of travel plans, study courses, and retreats. Some communities immediately shifted their events to an online format, while others slowly adopted similar moves as the full weight of the pandemic began to set in. But while the online world has become a refuge for the Buddhist teachings—along with so much human activity—few have asked whether online Dharma should become the new norm.

Three present and looming crises face Buddhists around the world today: the COVID-19 pandemic is foremost, but behind it is an economic crisis and a long-acknowledged yet still unresolved global climate crisis. Buddhist centers and teachers have grown and succeeded in the last half-century through following traditional teaching models of close one-on-one instruction, requiring sometimes lengthy commitment and extensive global travel.

Many adjustments have been made along the way, however. As Buddhism has modernized, lay teachers have replaced lamas, senseis, and ajahns as a first point of contact for many Buddhist practitioners. With this, many begun and cultivated in people’s living rooms and in office buildings, replacing the temples and monastic complexes of the past. Similarly, much of the contact that Buddhists have with the teachings comes from books, so a practitioner in London could have the teachings of Huineng, Thich Nhat Hanh, Ajahn Chah, Nāgārjuna, and Robert Thurman all on their nightstand ready to be consulted.

The benefits of Buddhist modernism have been widely touted. As Dharma teachings have become more widely available, there has been a democratization of access. Many previous long-standing barriers have been challenged, such as the exclusion of women from the teachings and roles as leaders in many traditions. The Dharma has also found its way beyond the confines of Buddhists, as psychologists, scientists, and philosophers have grappled with Buddhist practices and ideas and—more recently—professionals from lawyers to doctors, police officers, and school teachers have taken up mindfulness and loving-kindness practices inspired by and/or derived directly from Buddhist traditions.

Given the widespread acceptance of these changes and others in recent years, any claim that online or virtual teachings are somehow an unacceptable break from tradition seems tenuous at best. However, it is fair to say that with these changes and with online teaching, workshops, and retreats, something important is lost. The role of both the teacher in face-to-face settings and fellow learners has an intangible weight, as does the sense of being there due to one’s own effort and sacrifice, whether that is just a couple of hours on a Wednesday night or finding oneself in the foothills of the Himalaya surrounded by monks of all ages drinking butter tea and eating tsampa (Tibetan roasted barley flour). In either of these cases, one physically enters a new space for the purpose of learning and practicing. This movement, which may include smelling incense, seeing Buddhist images, and feeling a particular meditation cushion or chair, are well known to educators as important tools in what has come to be termed embodied learning. Practices in embodied learning. From waag.org

The experience of opening up one’s computer on the couch or office desk simply cannot carry the same elements of embodied learning, even when students can reply with verbal or written responses. As educators Sandy Baum and Michael S. McPherson write: “Simply displaying or describing an expert performance of a skill is a poor substitute for working with a student to help develop the skill. Imagine, for example, trying to teach someone how to drive a stick-shift car through lecture. . . . In university settings, even in very large lecture halls, students often have some opportunity to ask questions or even (shudder) to be called on. Lecture courses usually provide some organized opportunity to meet together with a section leader in smaller groups. And, significantly, in-person lectures provide a shared public experience in the sense that they are heard and seen together by a group of people.” (Daedalus)

To simply package a teaching or retreat in a tidy way and send it out to those who request it risks cutting all of these strings of connection between the student, teacher, and fellow learners. However, online teachings can be given in a way that keeps the connections intact. Some online teaching platforms have developed peer-mentors, students who have taken the course and shown an interest in helping others, to give direct, one-on-one attention to new students. Online discussion boards also present opportunities for peer-to-peer conversations and help. Teachers can then interact with students directly in capacities as intimate as one-on-one video conferencing or as large as open-access live-streams in which viewers can come and go as they like but can also ask questions (usually via a live chat function) that might be addressed during a Dharma talk or lecture. Driving simulator at the Orange County Library System. From ocls.info

If we imagine the scenario of teaching someone to drive a stick-shift car, we might think of driving simulators. While too costly for each person to own one, public access could be offered through schools and libraries. Dharma instruction is, fortunately, a bit less resource-intensive. However, not everyone has a quiet space in which to meditate, so similar public spaces could be developed for practice. These spaces could also utilize webcams and screens with speakers, through which a teacher could see and remark on posture and give instruction. This could be supplemented by meditation with one’s computer or smartphone with one of the many apps currently available.

That online Dharma learning is possible is made clear by the ever-growing number of online Dharma institutes, workshops, and classes that were available even before the COVID-19 pandemic began. As we move beyond the pandemic and consider the other two crises, the financial and climate, we would be wise to ask if and how extended online learning can be of benefit. Certainly, the rapid acceleration of the move to online Dharma has further democratized access; and when done correctly this shouldn’t diminish learning. Likewise, those who live far from existing centers, large and small, suddenly have a large burden removed in terms of travel. 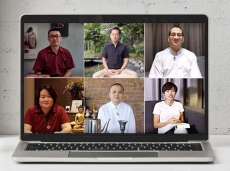 Baum and McPherson provide evidence for this from the realm of secular education: “Educational psychologist Mary Tallent-Runnels and colleagues’ review of research on online teaching and learning, which includes primarily descriptive and qualitative studies, found a consensus that online learning outcomes appear to be the same as in traditional courses, although students with prior training in computers are more satisfied than others with online courses.” (Daedalus) They also rightly note that in-person classes aren’t perfect, a point often overlooked by critics of online instruction.

Not mentioned in most discussions of online Dharma teaching is the environmental benefit reaped from the thousands of miles not driven or flown for in-person instruction. This is likely to most heavily affect the wealthiest of practitioners, those for whom a two-week retreat half-way around the world each year is an easy escape. But these are also the practitioners most aggravated, likely, by other modernizing trends that have extended the reach of Dharma teachings. Students with few resources could find the direct access to teachers online puts them on the same footing as better-off counterparts.

As important as travel and in-person Dharma education is for many, it must be balanced with our increasing need to radically reduce carbon output into the atmosphere. Adopting near-universal online teaching could be one way that Buddhists lead the world in addressing climate change. This alone should make it a topic of consideration for both practitioners and temple leadership. Such changes would be difficult, but given the alternative, these are the choices we are faced with.

The Human Factor: The Promise & Limits of Online Education (Daedalus)

The Buddhist Code of Discipline for Householders: An Online Discussion with Buddhist Scholars
Gompa: An Interview with Graham Coleman on an Online Vajrayana Monastery Service
Buddhistdoor View: Netizen Nastiness
Finding Ways to Educate Our Children with Buddhist Wisdom
Mindful Technology For Right Livelihood: Foundations and Examples
Dharma In The Digital Age: Susan Piver