Highlights of Buddhist Art at the Norton Simon Museum 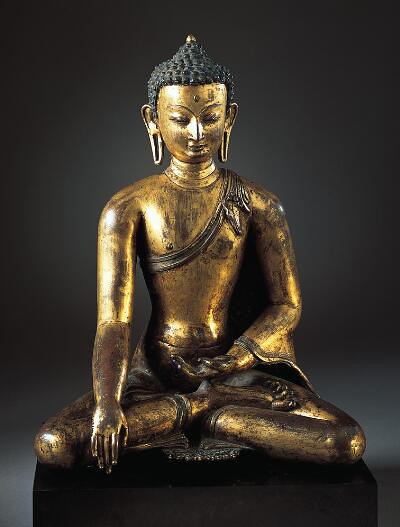 The Norton Simon Museum in Pasadena, California, is renowned worldwide for its impressive collection of European masterworks from the Renaissance to the 20th century. Amassed by the industrialist Norton Simon (1907–1993) over a 30-year period from the 1950s and merged with the modern European and American art collection of the Pasadena Art Museum in the 1970s, the collection draws thousands of visitors a year eager to view original drawings, paintings and sculptures by such giants of the Western art world as Rembrandt, Degas, Picasso, Kandinsky, and Van Gogh. Unbeknown to many visitors, the museum also houses an extensive collection of South and Southeast Asian art, collected by Simon from the 1970s, with assistance from such Asian art experts as Indian scholar of Southeast Asian and Himalayan art and culture Dr. Pratapaditya Pal. Among these are many truly remarkable Buddhist sculptures and paintings that span two millennia and present a spectacular sampling of traditional Buddhist art.

The earliest Buddhist artworks in the collection are two sandstone pillars from the state of Madhya Pradesh in north-central India. One is carved in low relief with the scene of Prince Siddhartha’s departure from his father’s palace in search of spiritual enlightenment. Typical of early aniconic Buddhist art, the scene does not include an image of the Buddha (or buddha-to-be) himself, but instead his presence is represented symbolically. The narrative begins at the top of the pillar, with Siddhartha leaving the palace, represented by his wheel-marked footsteps approaching his horse and groomsman. Above the horse, two flywhisks and an umbrella—symbols of royalty—represent Siddhartha astride his steed. On the lower register, flower petals are strewn on the ground to muffle the sound of the horse’s hooves and to symbolize the future Buddha’s divinity.

Two regions lay claim to the earliest depictions of the Buddha in human form dating to around 2nd and 3rd centuries: Mathura in the northern Indian state of Uttar Pradesh and the ancient kingdom of Gandhara, located in what is now Afghanistan and Pakistan. The Norton Simon Museum houses several Gandharan Buddhist figures and carved panels, the most spectacular of which is arguably the large standing figure of the bodhisattva Maitreya. Carved in the 2nd or 3rd century out of dark gray schist, the Buddha of the Future is depicted with a muscular physique garbed in flowing princely robes and jewelry. Gandhara was located along the ancient Silk Road, so its Buddhist sculptural style was heavily influenced by Greco-Roman sculpture from the West. This Maitreya features Greco-Roman facial features, including an aquiline nose, and has long, curly hair tied in a chignon, an interpretation of the Buddha’s ushnisha, or cranial protuberance representing his advanced spiritual state. In addition, he wears two necklaces, one of which has a charm depicting Poseidon, a god with Greek origins, suggesting a degree of religious tolerance in Gandhara at the time of this sculpture’s making. 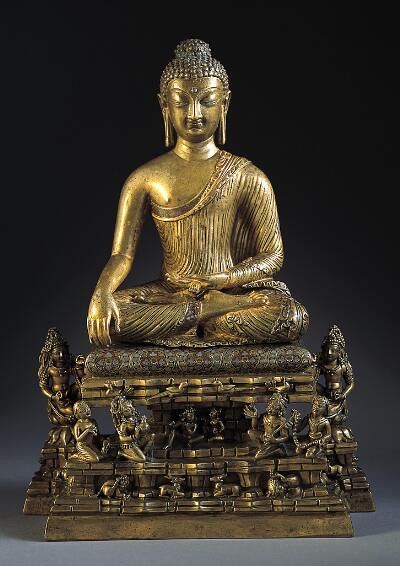 Over the centuries, as Buddhism evolved and grew, iconography of the Buddha became standardized, and as it spread throughout Asia, its imagery also absorbed many regional characteristics. An altarpiece from Kashmir dating to about 700 is a masterpiece of metalwork depicting the historical Buddha, Shakyamuni, wearing the robes of a monk and seated in the lotus position with his right hand touching the earth, a gesture that represents his attainment of enlightenment, or Buddhahood. Cast in bronze, with silver and copper inlay, the sculpture also exhibits a strong Kashmiri flavor, particularly in the figure’s wide set, almond-shaped eyes with arched brows and the broad nose and tightly smiling mouth. The Buddha sits on a pedestal that likely represents the cosmic mountain Meru, divided into three realms—animal (bottom), human (center), and celestial (top)—suggesting the Buddha’s transcendent nature at the center of the universe.

Another superb example of Buddhist metalwork from the Himalayan region is a gilt-copper alloy seated Buddha figure from Nepal. This elegant sculpture was cast in the 13th century and features similar iconography to the Kashmiri figure of Shakyamuni, with the Buddha touching the earth with his right hand. It is possible that this sculpture may represent Akshobhya, a transcendent form of the Buddha (one of the Five Wisdom Buddhas of Vajrayana Buddhism). His name in Sanskrit means “The Immovable One,” and the qualities of stillness and resolve are potently expressed in this highly refined example of Nepali Buddhist metal sculpture.

Also represented in the Norton Simon Museum are a significant number of Buddhist figures from Southeast Asia, in particular Thailand. One of the most dramatic Buddhist images in the collection is the colossal standing figure of Shakyamuni Buddha that is positioned in the main lobby of the museum, as if to greet visitors. The figure was carved out of sandstone in Thailand in the 9th century, late in the Mon-Dvaravati period, when Buddhism first rose to prominence in what is now central Thailand. The figure’s slender physique and compassionate face with full, slightly open lips is a masterwork of Thai Buddhist stone sculpture and foreshadows some of the finest sculpture of the later Angkor period. Measuring more than seven feet (two meters) in height, this serene figure of a gently smiling Buddha emanates majesty while also conveying a powerful message of calm to viewers today, as it surely did to worshippers over a thousand years ago. 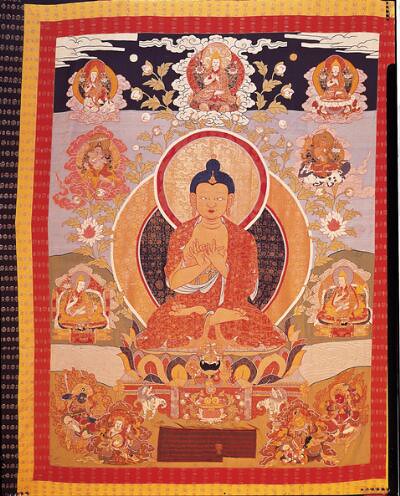 The collection also features a number of sculptures, book covers, and thangka paintings from Tibet. One of the most remarkable among these is an appliquéd silk thangka depicting Maitreya that is rarely on view at the museum, primarily because it is a textile and therefore sensitive to light. However, it is also challenging to display because it is a giant thangka—nearly 14 feet (4.3 meters) in height—of the type that was, and sometimes still is, displayed on hillsides during special ceremonies. This particular appliquéd thangka was commissioned in 1793 by the Eighth Dalai Lama (1758–1804) to commemorate the death of his tutor, Yeshe Gyaltsen. Created for the Dalai Lama’s personal use, it once hung in his private chapel in Lhasa. The central figure is Maitreya, who is depicted with a golden body, a miniature stupa in his hair, and his hands forming the gesture or mudra of turning the wheel of Buddhist law. Directly above Maitreya is Tsong Khapa (1357–1419), the founder of the Yellow Hat or Gelupga order of Himalayan Buddhism, with which His Holiness the Dalai Lama is associated.

Although this large thangka is rarely on display, the other abovementioned works can be viewed whenever the museum is open to the public, and are evidence that while over the 30 years that Norton Simon was building his private art collection he not only had an eye for the finest Western drawings, paintings, and sculptures, he could also appreciate the skills of the finest Buddhist artists of South and Southeast Asia. Those visitors who go beyond the galleries housing the Picassos and Rembrandts—as fine as they may be—will be rewarded both aesthetically and spiritually by these rare masterworks of Buddhist art.