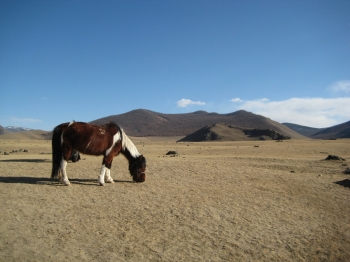 Horse on the Mongolian steppe, by Djozef Markovich.
An American Buddhist friend of mine recounted a conversation she had with another practitioner, one who comes from a clear, unwavering cultural confidence in the teachings of rebirth. He marveled that she and other Westerners seem to doubt the truth of reincarnation, and asked incredulously, “You really believe we will only live this one lifetime, and never be incarnated again, don’t you?”
“Yes,” she answered. “I really believe we only get this one lifetime.”
“Well,” he responded with a note in his voice of sadness or compassion for her confusion, “that really explains a lot about how you Westerners behave”.
My Dhamma friend shared this conversation as a reflection on views, noting how deeply invested most of us are in our own views and opinions, including those that we inherit by virtue of the cultural contexts we are raised in. She felt profoundly sure of the fact that reincarnation is a myth, and that we will all only be here once. For the gentleman she was chatting with, rebirth was as deeply ingrained in his belief system as the idea that we need air to live. For both of these practitioners, their understanding about the afterlife may have been so completely adopted as to have been invisible to them, but if asked about it, they both may have declared that certainly their view reflected the correct understanding of how things work.
My contemplation upon hearing my friend share was of the environmental implications of living as if we only get this one life. If we believe we’re never going to walk on this soft soil and swim in these cleansing waters again, what responsibility do we hold for attentively taking care of Mother Earth’s body? If our actions are unknowingly shaped by unexamined views, we may feel that we do not stand to lose anything if we despoil the environment in pursuit of personal enrichment. Living in a society permeated by the assumption that we only have one life to pass on Earth, we lose the sense of personal risk and responsibility that extends out into future lifetimes and future seasons passing on this planet.
For those of us raised in the Western cultural context, there is a subtly pervasive, underlying view that nudges us to live hard, play hard, and make lots of money in this one shot lifetime we’ve been given before our final judgement. It seems reasonable to profit off the exploitation of resources now, and we may assume this is the correct and obvious way to understand the world, when we think of it at all. After all, we’re never going to see the long-term damage wrought by the strip-mining and fracking, the clear-cutting of rain forests and degradation of our oceans.  In this way of conceiving things, it’s regrettable, perhaps, that we’re handing such a mess on to our descendants. But we can all breathe a sigh of relief that we’re personally going to get out in time. We’ll be dead and gone before this short-sighted exploitation comes to karmic fruition in a desperate and depleted, possibly apocalyptic future.
Contrary to this view, the Buddha taught from a cultural context founded in an explicit common acceptance of reincarnation. The Suttas are replete with instructions on the types of behavior that lead to good and bad rebirths, including this comment in the Dhammapada, “Those who take up wrong views go to a bad rebirth… Those who take up right views go to a good rebirth”.  If we base our actions on these teachings, we come to understand that most of us will be here again. Our relationship with the world we inhabit may be illuminated by a greater sense of care when we assume the view that most of us will return in different forms and different incarnations. With many lifetimes to work through our kamma and attain liberation from the cycle of rebirth, we may feel more personally invested in maintaining the well-being of the Earth. Those of us who adopt the view that we will indeed be coming back, may be inspired to act on behalf of the health of the planet now, or at least to minimize any personal contribution to actual damage done.
When we investigate our own most deeply held views through practice, it allows space for questioning those assumptions that drive our behavior. When we consider the implications of our behavior on the future of the planet, we may see that there is some benefit to be realized either now or later in acting as if we may indeed live here again. The Buddha exhorted us to examine the mentality we base our actions upon and to adopt wise views. By remaining open to the possibility that reincarnation and rebirth are just as feasible as the notion that we only live once, we move closer to our own freedom from the cycle of samsara. As the Metta Sutta states, “by not holding to fixed views, the pure-hearted one… is not born again into this world”. And by opening our minds and views to this possibility of rebirth, by living as if we may be born onto this planet for many lifetimes to come, perhaps we will be moved to act with the responsibility and urgency that are called for to avert the climate crisis from worsening.


Lulu Cook, RDN, is a vegan nutritionist with a background in sustainable food systems and mindful eating. She has been trained as a Dhamma group facilitator with Noah Levine (Dharma Punx and Against the Stream), and is currently a student of Amma Thanasanti (Awakening Truth). She is a householder in the Bay Area who practices the Dhamma as it unfolds in a busy urban home with two dogs, a daughter and partner, and the occasional hip-hop concert.