Kyabjé Tsikey Chökling Rinpoche, son of the renowned Dzogchen master Kyabjé Tulku Urgyen Rinpoche, was the fourth incarnation of Terchen Chökgyur Dechen Lingpa, an extraordinary 19th century tertön, or treasure-revealer, regarded as one of the 108 major tertöns foretold by Padmasambhava. The countless hidden terma, or treasures, he revealed in the form of Buddhist scriptures, sadhana practices, and profound teachings are meticulously preserved for future generations in the 40-volume Chökling Tersar.

During his lifetime, Chökgyur Lingpa collaborated with two other contemporary realized masters, Jamyang Khyentse Wangpo and Jamgön Kongtrul Lodrö Tayé, to provide an abundance of sacred texts, sadhanas, and scholarly treatises still widely cherished in Tibetan Buddhist monasteries, mountain retreats, and Dharma centers of the Nyingma and Kagyu traditions. Moreover, together they founded the non-sectarian Rimé tradition whose powerful influence revitalized and preserved many indispensable teachings and spiritual treasures. To benefit sentient beings, the work of these sublime masters has continued through successive rebirths.

I met Kyabjé Tsikey Chökling Rinpoche decades ago on my first of many yearly trips to receive teachings from his father. I can say without hesitation that Chökling Rinpoche was one of a handful of Buddhist masters that, just by his way of being, inspired my faith and yearning to practice the Buddhadharma.

The sad news of his passing into parinirvana on 18 December 2020 spread swiftly throughout the world. As a sign of his spiritual accomplishment, he remained in a meditative state of thukdam for seven days. One old friend of mine, a former nurse practitioner, wrote about visiting while Rinpoche was still in thukdam. She said that even after five days there were no signs of rigor mortis; Rinpoche’s face was soft and supple, and there was no odor or shrinkage—she termed it a medical impossibility.

Within an hour or two of Rinpoche’s passing, I received the unhappy news. Immediately, I sent a voice message to his eldest son, Phakchok Rinpoche, offering my heartfelt condolences. Rinpoche replaied almost immediately.

It’s amazing the way that great Buddhist practitioners, while not denying the sadness of the moment, are able to simultaneously celebrate the sublime yogi who is passing into parinirvana at the time of death. Sitting alone in the room with his father’s completely fresh thukdam, Phakchok Rinpoche observed how “this is actually a great day. It’s so peaceful, he is very special. We are all family members because we were brought together by his efforts; this is why we have such a great connection.”

Not having even the slightest of Phakchok Rinpoche’s qualities or insight, I still wanted to understand the full significance of his father’s life. How could I make sense of what our connection to Chökling Rinpoche and his tradition meant? I therefore asked three of Rinpoche’s brothers, his two sons, and his wife to share their recollections of this most marvelous of beings.

Sangyum Dechen Paldon was Chökling Rinpoche’s wife of more than 40 years. She is one of the most loving and wise people I’ve ever met. She was Rinpoche’s unshakable rock of support and, with an impeccable combination of skillful expertise and humble grace, she has been the force that has shepherded many of Rinpoche’s heartfelt wishes and Dharmic activities to fruition. Reminiscing on their marriage and their life together she said:

I also knew Rinpoche’s love as a husband and witnessed his love as a father. Some of Rinpoche’s favorite times were spent sitting on the floor of our home, eating a meal with the family, joking and playing and showing affection. Rinpoche loved togetherness, and it is surely through his blessings that his dearest brothers, children, and myself were able to come together and be with him before his passing. When I asked Phakchok Rinpoche why he thought his family was so warm and loving, he instantly responded that he “never saw my father scold my mother. He was always incredibly kind to her, and it had a positive effect on the entire family.”

if an ordinary person needed his help, for example to pray for the sick or dying, he didn’t care if it was day or night. Oftentimes, when people asked, especially if they were so poor that they lacked the means to make offerings, he would immediately come to their home. He frequently would stop on the street to talk to beggars, treating them as friends and sometimes bring them to his home for food and conversation.

People often say that Rinpoche’s demeanor was special, yet it was so unlike anyone else I ever met that words seemed to fail, placing unnecessary limitations and missing the mark, each time I tried to describe it. When I asked his brother Tsoknyi Rinpoche how to describe the qualities of Rinpoche’s presence he joyfully responded:

Chökling Rinpoche was a very unusual, mysterious person. I can’t say that I was ever really able to fully comprehend the totality of who he was. When we were together, I often felt that although he was fully present with me, simultaneously his mind was also in a completely different realm. It was an incredibly rare quality and an extraordinarily beautiful way of being. It’s not like he was out of touch or lost, he was fully present and attentive. But he was also somewhere else. It’s hard to describe. I have been fortunate to meet many great beings, extraordinary practitioners. Yet he was unique, in any given moment he would appear as both fully human and otherworldly. The bottom line is he is a very special being. I felt very sad when we lost him.

What was the source of this otherworldliness? Perhaps Chökling Rinpoche’s older brother Chökyi Nyima Rinpoche’s explanation was the most satisfying: “Rinpoche frequently had very profound visionary experiences, so strong that sometimes they kept him awake during the night.” I recall hearing about Rinpoche’s visions from a friend of mine who traveled with Rinpoche and his father, Kyabjé Tulku Urgyen Rinpoche, to Bhutan. He said that when they were on the trail to Taktsang Gompa, Chökling Rinpoche was so overcome with visions that he was having trouble negotiating the treacherous cliff-edged trail. His father, who normally never admitted to the slightest accomplishments due to his meditation practice, gave Chökling Rinpoche instructions in how to relate to the experience.

Wanting to know more about Chökling Rinpoche’s visions, I asked Phakchok Rinpoche to recount a story I had heard him briefly tell in Nepal, when we were working on our book.

When my father went to Tibet, he went to visit Samye Monastery where he met an old Khenpo. Although he never told me what they spoke about, he said it was quite a special moment. He said that early the next morning he had a semi-waking dream where the Khenpo transformed into Vimalamitra. Vimalamitra hit my father’s head with a copy of Longchenpa’s Treasury of the Dharmadhatu. My father said from that moment on he knew the entire text by heart. When my father returned from Tibet and told me this story, I am embarrassed to say that I wasn’t sure if I believed him. So, I asked him to recite the text, which he immediately did in a single go without any hesitation or break.

Rinpoche's official role at Ka-Nying Shedrub Ling Monastery was that of head vajra master, and he undertook this duty with great seriousness. Rinpoche had a certain gravitas and majesty when he sat on his throne at the head of the assembly; his presence elevated the experience of the ritual for everyone in the room. Each year, before Tibetan Losar, Rinpoche would perform his spectacular dance as a part of the Vajrakilaya practices to ward off obstacles. Outwardly, Rinpoche performed this dance alone, but he was accompanied by a retinue of invisible dakinis. All who saw his dance were mesmerized by the way Rinpoche revealed through his effortless physical movements the depths of his inner realization.

Rinpoche also revealed his visionary experiences by initiating the construction of a Zangdok Palri temple to the south of Kathmandu. Moving forward, we will be dedicating our energies to bringing Rinpoche's vision to its final fruition.

Although many decades have passed, I still remember what it was like meeting the great masters who reached spiritual maturity before the Cultural Revolution and subsequent journey out of Tibet. It was hard to fathom that a human could actually be like Kyabjé Dudjom Rinpoche, Kyabjé Dilgo Khyentse Rinpoche, Kyabjé Tulku Urgyen Rinpoche, and many others; just by how these masters were, it gave me faith in the Dharma. While nearly everyone is now touched by the hyper-rationality of the modern world, the power of the extraordinary tradition of Vajrayana still manages to shine through. I think this is best summarized by the present day Dilgo Khyentse Rinpoche, Tsikey Chökling Rinpoche’s youngest child:

My father, Tsikey Chökling Rinpoche was the emanation of this marvelous tertön Chökgyur Dechen Lingpa. In my father, I saw the qualities of an authentic and an exemplary yogi. When wisdom is fully realized it has no limits—there are no longer any boundaries between an inner perceiving mind and outer phenomena, it is all just a single expression of emptiness and wisdom. But when one reaches this state, you become a realized yogi. My father was very humble, lived quite simply, and was kind to everyone, regardless of their social status, race, men or women. His love and care had no limits.

In this day and age, many people say it is almost impossible to find genuine Dharma practitioners and authentic Dharma teachers. I would have to say that my father proved that wrong. He opened my eyes to see that there are in fact some marvelous beings still living among us. If you can recognize this, you are very lucky. If not, your loss. That’s just how it is. 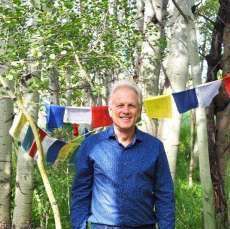 Erric Solomon is a Buddhist yogi, teacher, and a former Silicon Valley technologist. Solomon has studied under the guidance of some of the world’s greatest Tibetan spiritual masters, and with some of the world’s most renowned artificial intelligence researchers, and later spent years in traditional Buddhist retreat maturing what he had learned.

Solomon is the co-author of Radically Happy: A User’s Guide to the Mind (Shambhala 2019). More about Erric and his work can be seen at ErricSolomon.com and Samye Institute, and on Facebook and Instagram.

Lessons in Impermanence: A Conversation with Choje Lama Wangchuk of the Thrangu Monasteries
Khandro Dorje Phagmo Rinpoche: An Ancient Legacy Manifested
Searching For The Enlightened Vagabond: The Life And Teachings Of Patrul Rinpoche – An Interview with Matthieu Ricard
Coping with Fear, Anxiety, and Panic During the Pandemic
Cognitive Apparatus and the Nature of the Mind in Tibetan Buddhism
The 16th Karmapa Remembered—An Interview with Ngödup Burkhar
Searching for the Lotus-Born Master: Following the Father of Vajrayana Buddhism’s Journey Across the Himalayas