Lama Palden Drolma: Transmitting the Teachings to the West Lama Palden Drolma never imagined herself a Dharma teacher. Authorized to teach in both the Karma Kagyu and Shangpa Kagyu lineages of Tibetan Buddhism, she first met her root guru, the first Kalu Rinpoche (1905–89), in San Francisco in 1977. One of just a few Western female lamas, Lama Palden Drolma calls Kalu Rinpoche’s decision to make her a lama (in 1986) “a radical step.” Practitioners are often surprised at seeing a Western woman in such a position.

Lama Drolma explored all the world’s great religions before settling on Buddhism, beginning an intensive study of spirituality and mysticism in her teenage years. After meeting Kalu Rinpoche—her first encounter with Buddhism—she took the dramatic step of leaving most of her family, her friends, and her life behind in the United States to go and study at his institutions in Darjeeling, Sikkim, and Bhutan, accompanied only by her young son. Today Lama Drolma leads a sangha in Fairfax, California, a small town in idyllic and picturesque Marin County. The non-profit under which she teaches is called the Sukhasiddhi Foundation, a Sanskrit name meaning “the attainment or perfection of comfort or life-satisfaction” and deriving from the name of the female adept Sukhasiddhi. Identified with Yeshe Tsogyal, Sukhasiddhi was the teacher of the yogi Khyungpo Nenjor, the founder of the Shangpa Kagyu school of Buddhism.

Most significantly, in 1985 Lama Drolma completed the traditional three-year retreat of intensive practice, in which the retreatant is led through a series of 40 sequential practices as well as a consistent, progressive daily practice, from Ngöndro (preliminary practices) to Guru Yoga, Yidam (deity) practice, the Six Yogas, and Mahamudra. It is this core practice that she has adapted to the lifestyle of her Western students, in a completely innovative way that nevertheless remains faithful to tradition. It is offered to both monastics and householders, who are able to practice it while remaining engaged in the world. Such an adaption has allowed these rigorous and transformative teachings to be introduced into American culture in a way that is practical as well as illuminating.

During her own retreat, which took place in Vancouver, Lama Drolma had no thoughts of teaching herself or of setting up her own foundation. She says that the desire to teach can often be an obstacle in retreat in that it can invite a type of individualism, even narcissism, that “has no place in real Buddhism,” and that it is best to just concentrate on the goals of retreat and its demands—one should definitely not be trying to expand one’s ego, giving in to personal ambition, but rather should do one’s best to reduce desire.

Upon completion of the three-year retreat, Lama Drolma first became a practicing psychotherapist, with no plans to teach as yet. But after repeated requests from people to teach, she realized she had been given the rare opportunity to bring the Buddha’s teachings to those seeking Refuge and that she was eminently qualified to do so. “I felt so much transformation and blessing from our teacher, and the experience was so unbelievably helpful to me, that I wanted to offer that to others also. I wanted the stream that began with Kalu Rinpoche to continue,” she says. She received approval to teach not only from her root guru, but also from such illustrious teachers as Jamgon Kongtrul Rinpoche, Tai Situ Rinpoche, and Bokar Rinpoche.

With this aspiration, she began to initiate students and prepare them to undertake their own retreat, although at the foundation, which was set up in 1996, the practice would mainly be integrated into daily life over many years instead of in the traditional three-year retreat setting. The “curriculum” consists of all three vehicles—Shravakayana (or Theravada), Mahayana, and Vajrayana—which she considers critical in order to give students a basic foundation in all the Buddhist teachings. “People really need to know Shravakayana and Mahayana in order to have that integration,” she explains. She references the fundamental Tibetan Buddhist teaching that if you have a house, you must have a foundation, and if you want a second floor, the first floor must be sturdy . . . In other words, nothing can take place without a proper foundation. Also critical to her teaching is the emphasis on scriptural study, something often lacking in other American Buddhist systems. She holds that scriptural study is important in order to fully understand the Dharma. 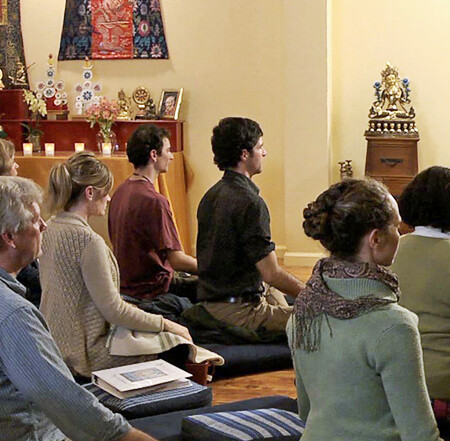 Meditation class. From the Sukhasiddhi Foundation

Although the Sukhasiddhi Foundation center’s shrine room forms the nucleus for the preparatory teachings, once the retreat experience begins to take hold the students can live elsewhere, returning to the center five times each year for personal instruction. Once the retreat begins, they are required to practice for a minimum of two hours a day, and the retreat can last anything from six to fifteen years. The students are from diverse backgrounds and professions, and include lawyers, retirees, school teachers, engineers, and nurses. Many come attracted to the idea of genuine Refuge, the ability to commit to serious practice, and the rare opportunity to be guided by an accomplished master in an authentic lineage. While the majority of Lama Drolma’s students engage in this modified form of long retreat, she has also guided students in the traditional three-year retreat in northern California, near Lake Tahoe in the mountains.

Other practices also take place at the Sukhasiddhi Foundation, with other authorized teachers. On the agenda are a weekly open sitting meditation, morning meditations, Tibetan yoga classes, and a “Death Cafe”—an open, respectful, confidential, and safe space where people can discuss death and impermanence and reflect on what is of greatest importance and value in their lives. When asked what she enjoys most about being a teacher, Lama Drolma shares, “In Vajrayana, we never stop studying,” and that teaching is her “deepest heart love.” She says that watching people blossom and share in the Dharma expresses the deepest part of herself. One of the main challenges—and one that was foretold by Kalu Rinpoche—has been to find forms that work organizationally in the West. Western teachers need to constantly adjust and experiment in order to find the most effective way to transmit the teachings. “It’s a work in progress,” she says.

She also shares that while traditional Tibetan Buddhist masters often had 20 to 30 years of intensive retreat training, frequently in the mountains in Asia, there is no way to fully replicate that experience in the United States. However, she can attest to the profound awakening, peace, joy, loving kindness, and equanimity that she notes in her students upon completion of intensive practice. “Buddhism is giving Westerners a very authentic path to commit to—one that offers compassion, deep realization, and liberation,” she notes.