Land of the Auspicious Dharma Wheel: The First Buddhist University in Russia 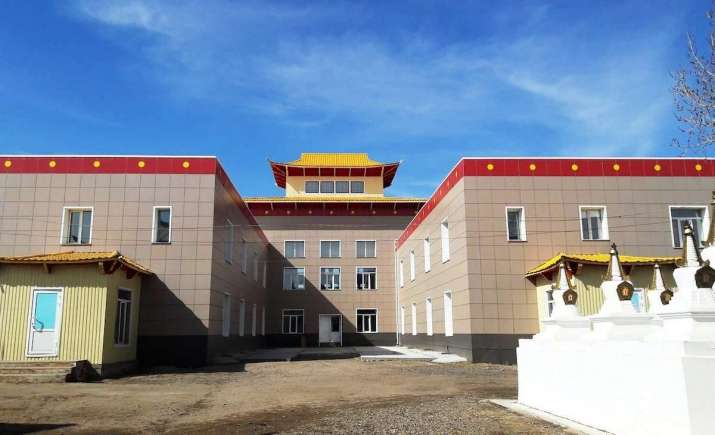 The Buddhist University Dashi Choinkhorlin (Tib: Tashi Chokhor Ling; “Land of the Auspicious Dharma Wheel”) is a center for religious higher education in Ivolginsky Datsan, the main Buddhist monastery in the Republic of Buryatia and home of the Buddhist Traditional Sangha of Russia.

Ivolginsky Datsan is located in a picturesque valley of the Ivolga River some 35 kilometers from the Buryat capital Ulan Ude. It was the first Buddhist monastery constructed after the anti-religious persecutions of the Soviet government, and while the majority of the temples in the complex were built in the 1970s, services have been held there continuously since 1946.

Dashi Choinkhorlin was built as a part of Ivolginsky Datsan in 1991. It was named in honor of the first Pandito Khambo Lama Damba Darzha Zaiaev (1710–76), who was also the first Buddhist leader from Western Siberia and the first Buryat lama to complete a classical Buddhist education in Tibet. The educational institution was founded by the Buddhist Traditional Sangha of Russia as a result of the revival and development of Buddhism in Russia, and the great interest in Buddhist philosophy among many Russians. The main task of the university is to revive the traditions of Buddhist and Asian studies in Russia, and to train lamas from monasteries in Buryatia, Buddhist scholars, translators, and practitioners of traditional medicine (Bur: amchi).

During his visit to Buryatia in 1992, His Holiness the Dalai Lama consecrated the university building and blessed the teachers and students to continue their noble deeds in the name of reviving Buddhism in the Russian Federation.

Teaching students at the Buddhist University Dashi Choinkhorlin. From budduniver.ru

In 1999, Dashi Choinkhorlin received a state license to conduct educational activities in the field of religious education. Five years later, the institution was renamed Buddhist University Dashi Choinkhorlin and was permitted to expand its academic activities. Under Russia’s regulatory framework for higher education, the university conforms with the three-stage system of conferring bachelor’s, master’s, and doctoral degrees.

The university has four faculties: philosophy, tantra, iconography, and medicine. The students master Buddhist philosophy, logic, epistemology, tantra, rituals, iconography, medicine, and astrology, based on the educational system of the Gelug school of Tibetan Buddhism. They also memorize liturgical texts and study the old Buryat script, Tibetan, and English languages, as well as history, ethnography, computer studies, and other disciplines. All of the subjects are taught in Tibetan, Buryat, and Russian. The university plans to increase the number of special disciplines taught, in accordance with the programs of monastic schools in pre-revolutionary Buryatia. Examination at the Buddhist University Dashi Choinkhorlin.
From facebook.com Examination at the Buddhist University Dashi Choinkhorlin.
From facebook.com

The honorary rector of Dashi Choinkhorlin is Ganjur Lama, the rector is Dashibaldanov Dymbryl Bagsha, and the teachers are geshes who have graduated from Drepung Gomang Monastic University in southern India. The university has several branches in Buryatia, where future students are being trained. More than 200 khuvaraks from Buryatia, Chita, Irkutsk regions, Tuva, Kalmykia, Altai, Mongolia, Ukraine, Belarus, and North Ossetia study at the institute. They participate in prayer ceremonies held in Ivolginsky Datsan, thereby receiving the necessary practice to conduct prayer services. After enrollment, the students take a novice vow (Tib: getsul) related to taming the body and speech, and can also take full monastic vows (Tib: gelong), but these are voluntary. Lamas graduating from Dashi Choinkhorlin undergo spiritual practice in monasteries in Buryatia, Tuva, Kalmykia, St. Petersburg, and in Buddhist centers across Russia. Some work as teachers of Buddhist philosophy and the Tibetan language in other universities.

The university actively cooperates with many other Buddhist institutions, among them, Drepung Gomang Monastic University in India, Mongolia’s foremost monastery, Gandan Tegchenling, Buddhist Academy in Aginsky Datsan in Chita Oblas, southeast Siberia, and the Institute of Oriental Studies of Buryat State University.