Literature as a Way of Living, Part One 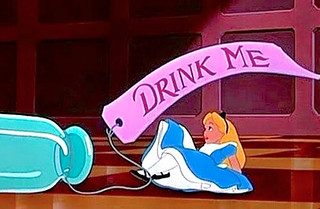 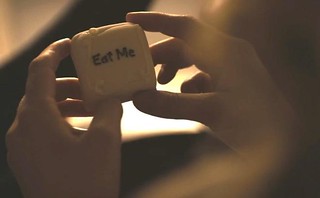 After Alice tumbles down the rabbit hole near the beginning of Lewis Carrol’s Alice’s Adventures in Wonderland, she lands in a strange hall full of locked doors. She finds a little key for a door that is too small for her to fit through, but on the other side of it she glimpses a beautiful garden. Eager to explore the garden, she discovers a bottle on a table nearby with a label that simply says, “Drink Me.” Upon drinking, she shrinks and becomes small enough to squeeze through the door, but quickly discovers that she is now too small to reach the key that she has left on the table above her. Then she sees a small cupcake with the words “Eat Me” in currants, so she eats the cupcake and grows much bigger than before.

Nanavira Thera and Stephen Batchelor, two contemporary secular Buddhists, both refer to this scene to capture what they regard as the ideal response to the Buddhist teachings.  Drawing attention to the fact that the label on the bottle tells Alice what to do with the bottle rather than describing what the bottle itself contains, Stephen Batchelor writes: “In the same way, the Four Truths are injunctions to do something rather than claims to be believed or disbelieved.” (Batchelor 1998) In other words, like Thera before him, Batchelor uses this scene from Alice to make the point that the so-called “truths” of Buddhism are not in fact truths, but practical challenges that ask you to act in particular ways under particular circumstances. It is for this reason that Batchelor prefers to talk not of “noble truths” but of “ennobling tasks,” not of Buddhism as a belief system but Dharma practice as a course of action. For instance, he writes, “just as Alice saw the label ‘Drink Me’ on the bottle and so proceeded to drink its contents, when encountering pain, one can see it labeled ‘Know Me’ and then embrace that pain instead of shying away from it.” (Batchelor 1998) 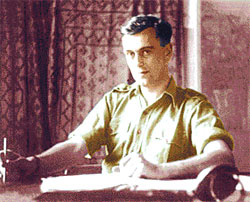 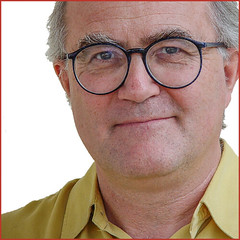 Literature as a way of living

But what if this same scene from Alice’s Adventures in Wonderland is equally applicable to pieces of literature like Alice’s Adventure in Wonderland? What if what Thera and Batchelor say of Buddhist “truths” is equally true of literary texts—that they too are, or at least can be seen as, injunctions to act? What if we related to literature—broadly conceived as to include novels, poems, plays, short stories, films, Netflix shows, pop songs, paintings, jokes, etc.—not as a description of life but, like the label on Alice’s bottle, as challenges to do something. Indeed, what if this is what the literature we love secretly wants us to do with it: after becoming engrossed in it and spontaneously enjoying it, to take one more small step and practice it, implement it, apply it—if, of course, we choose to.

William Blake’s illustrated engravings for The Book of Job (1825) succinctly capture this particular way of relating to literature. As you can see below, the first illustration depicts Job with his family before God grants Satan permission to test Job’s belief by destroying his wealth, by killing all of his family, and so on. The last engraving, in contrast, shows Job after he has maintained his piety, allowed his sufferings to open his ears to the divine, and been rewarded not only with wealth but with a new family. 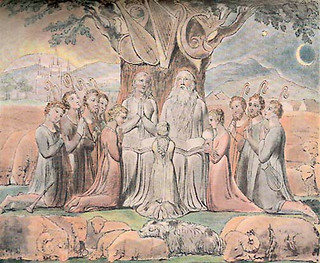 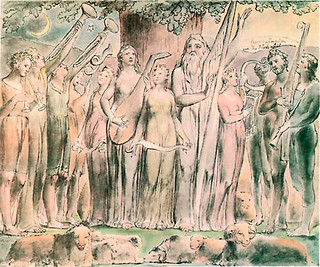 When you were little, did you ever do those “spot the differences” games in comic books where you had to find a bunch of differences between two otherwise similar images? See how many differences you can spot between these two panels.

What did you find?

Among other things, did you notice that in the first engraving Job and his wife are seated with large books open on their laps, whereas in the last engraving they are standing with musical instruments in place of the books? Did you also notice that in the first illustration the musical instruments themselves are hanging from the branches overhead, whereas in the final panel Job and his family are playing those same instruments?

What do these differences mean?

In the first panel Job and his family are characterized as pious, obedient, and by-the-book.  As Maimonides and others have pointed out, Job is a good man, but not a wise one. Rather than spontaneously practicing what he believes, the way one might play a musical instrument, Job and his family kneel solemnly and pray obediently. By-the-book. Why? Perhaps, among many other reasons, because of what is featured in the foreground and background of the first illustration. Job’s wealth—both spiritual (symbolized by the Gothic church to his left) and material (depicted by the flocks in front of him and the barns to the right)—are a reward for simply following the rules in the Books of Law that lie open in his lap. As it is said in the Tao Te Ching, “When the great Tao is forgotten, goodness and piety appear.” But the sun is setting on Job and his family.

When Satan figuratively blackens this sun, Job manages to maintain his integrity throughout a terrifying string of ordeals, he develops an ear for the divine and, in the process, his lived experience allows him to integrate and embody the contents of those same books, which he is now able to express in a much more spontaneous and sensual way. Like a musician who no longer needs to read from sheet music, or a singer who no longer needs her lyrics, he has metabolized the books and can now play them by heart, with a passion, color, and vibrancy that wasn’t available to him before. He is living what he formerly believed and is literally standing for it, perhaps not so much because he believes in it, but because he has experienced, played, and practiced his beliefs. As Blake himself writes, “As the true method of knowledge is experiment the true faculty of knowing must be the faculty which experiences.”

In short, just as Blake likens the ideal relationship between Job and his books to the relationship between a musician and his chosen instrument, so he seems to be suggesting that the ideal relationship between readers of The Book of Job and the book itself is that of a musician to a musical instrument:  the book is meant to be practiced and played, like Job’s harp or his wife’s lute. But given that these engravings are a commentary on a piece of literature by none other than William Blake, a now-celebrated writer of literature, what Blake is saying about the Book of Job may also be taken to apply to Blake’s own books, and many other books like them. Perhaps his poems, like the poems that comprise The Book of Job, are also meant to be picked up, practiced, and played.

Literature as the dialect of the people

The implications of this way of responding to literature may be quite significant, not just for readers and viewers in general, but also and perhaps more specifically for so-called spiritual practitioners. In his provocative essay, “A Democracy of the Imagination,” Stephen Batchelor argues, “There is no reason why a Buddhist should not profoundly value works of art that are not intentionally Buddhist.” In his view, works of art from all traditions can not only provide access to the most fundamental “Buddhist” insights, but can also mobilize people to act in alignment with these insights. Significantly, this context is increasingly permeated by literature. Thanks in large part to the Internet, people throughout the world, and especially contemporary Westerners, consume more literature than they have ever before. As a result, many of these people are likely to be more receptive to the wisdom expressed in culturally familiar and philosophically accessible sources than they are to more traditional or esoteric forms of Buddhism emerging, as they do, from less familiar cultures in less familiar languages. Surely this is the reason why Dean Sluyter, in the epigraph to his fascinating book Cinema Nirvana—which explores the “Buddhist” wisdom expressed in films like Casablanca, Jaws, The Graduate, The Godfather, and Memento—reminds us that shortly before Gautama died, he told his followers, “Go throughout the land and spread the Dharma in the dialect of the people.” What if the dialect of the people, perhaps especially the people of the West, is literature? Stephen Batchelor, for one, seems to think this is the case. In the same essay mentioned above, he makes the following radical and far-reaching argument: “In the individuated culture of the West, spiritual inspiration and meaning are found less in static icons and religious archetypes and more in the unfolding dramas of theater, music, novels, and films.”

What if this is indeed the case? What if most contemporary spiritual practitioners, especially in the West, are more likely to find “spiritual inspiration and meaning” in the characters they encounter in the pages of novels, in the episodes of their favourite Netflix shows, or in the choruses of their favourite pop songs, than in traditional religious icons and archetypes?  There is ample evidence that this is so. And if Batchelor is correct in his assertion that “[w]e find our heroes and heroines not in timeless icons but in flesh-and-blood characters forging themselves from the tensions of real and fictional dramas”, then what we do with the literature that grabs us is a matter of no small consequence.

The next article in this series will explore how to derive psychological and spiritual exercises from literature and how to practice those exercises.

A Democracy of the Imagination (Martine & Stephen Batchelor)

Literature as a Way of Living, Part Two