Gate into the Wuwei Confucian temple complex, with two couplets on the four pillars. Image courtesy of the author

On the third day of our Silk Road tour, the itinerary showed that we were supposed to visit Wuwei City Museum (武威市博物館) in the Wuwei Confucian temple complex. However, it was Monday and our tour guide had failed to realize that this meant the museum would be closed. Our visit was postponed to the following day, but this last-minute change did not upset many of us—after all, the plan was to visit four other sites in Wuwei, in addition to the museum: Kumarajiva Temple, White Pagoda Temple, the Haizang Temple complex, and Golden Pagoda Temple.

Before I elaborate on the Confucian temple complex and the museum, some historical background on Wuwei City, its temple and museum, and its significance as a stop on the Silk Road is in order. Roughly translated, the name, wŭwēi (武威) means “martial dominance” or “martial power,” and is derived from the Han dynasty emperor Wudi’s (r. 141–87 BCE) success in defending the Hexi Corridor against attacks by the Xiongnu Huns (c. 121 BCE). In those times, the city was also known as Liangzhou (涼州) and functioned as the eastern terminus of the Hexi Corridor. Located between three western capitals—Lanzhou (蘭州), Xining (西寧), and Yinchuan (銀川)—the city became a crucial link for the northern Silk Road. The only route from central China to western China, and the rest of Central Asia, passed through Liangzhou/Wuwei, which is why the city is an important part of all Silk Road tours. 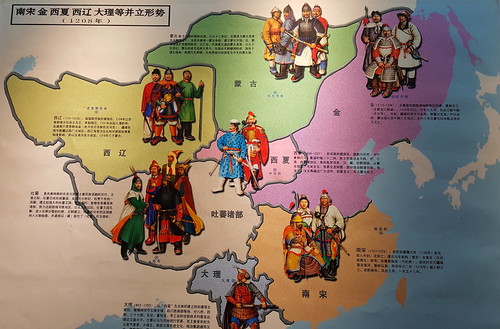 Map showing China during the Southern Song dynasty. Image courtesy of the
author

Today, Wuwei is a prefecture level city in China’s northwest central Gansu Province (甘肅省), bordered by Inner Mongolia to the north, and Qinghai Province (青海省) to the southwest. The city is famous for its many historic relics and sites, such as the Bronze Galloping Horse Treading on a Flying Swallow (銅奔馬), Western Xia Stela (西夏碑), White Pagoda Temple (白塔寺), Heavenly Stairs Mountain Grottoes (天梯山石窟), Kumarajiva Temple (鳩摩羅什寺), the Haizang Temple complex (海藏寺), and Golden Pagoda Temple (金塔寺), in addition to the aforementioned temple complex and museum.

Wuwei Confucian Temple (武威文廟) is one of three Confucian temples in China (which is why it is also denoted as Wénmiào (文廟) Temple). The best-preserved temple dedicated to Confucius in Gansu Province, it is located in the southeast of the city and comprises a complex of buildings covering an area of a little over 1,500 square meters, with a structure similar to that of an ancient palace. The original temple was built circa 1439 (Ming dynasty) on instructions from the reigning emperor, with support from public donations. Construction was completed in two years, but various extensions have been added over the centuries. 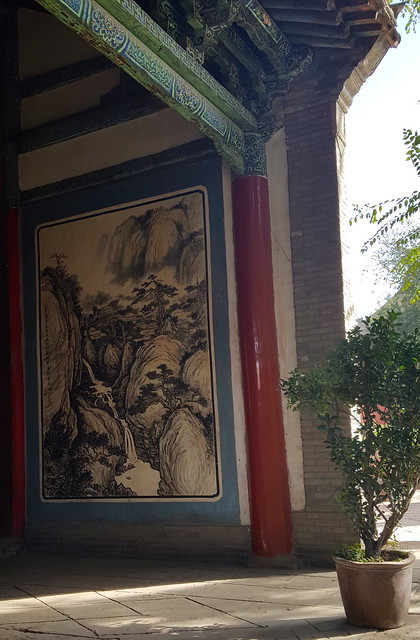 The temple itself occupies a central position within the complex. It is here that offerings are made in Confucius’ honor. Other notable structures are Dacheng Hall, Hastate Gate (Jimen), Lattice Gate (Lingxingmen), the Bridge of the Number One Scholar (Zhuangyuan Bridge), and Banchi Pool. The latter structures are on the south side of the complex. To the north lies the Sutra Pavilion and in the west, Liangzhou Mansion, which houses the Confucian Academy.

In 1981, the temple was given the status of a Provincial Relic Protected Unit by the provincial government, which led to the establishment of Wuwei City Museum. The museum holds an impressive collection of artifacts that includes more than 36,000 books, paintings, calligraphies, scriptures, and many cultural relics, two of which are nationally recognized. Some examples are; the Bronze Galloping Horse, a mummy, a bronze cannon of the Western Xia (c. 1038–1227), wooden and stone tomb carvings from the Tang dynasty (c. 618–907), stone stelæ, models of wooden pagodas, wooden engravings, golden bowls from Western Xia, silver coins and paintings from the Ming and Qing dynasties (c. 1368–1644 and 1644–1912 respectively). Documents written in the Phags-pa script, a unified script from the Mongolian Yuan dynasty. Image courtesy of the author

In 1977, a wooden painting of the Western Xia was unearthed from the Number Two Tomb in Liangzhou. The painting, which has 29 sections in total that record the lifestyle of Western Xia officials, is regarded as a rare artistic treasure.

Based on the above description, one would expect the complex to be quite an impressive sight, and it is. Just to give you an idea: the entrance gates and parallel windows have an aesthetic reminiscent of Beijing hutongs.

The first part of the temple we visited was the Hall of Carved Statues, which holds a Tang dynasty statue of a headless Buddha, a memorial tablet with inscriptions of the four animals of the cardinal directions—the Azure Dragon of the East, the Vermilion Bird of the South, the White Tiger of the West, and the Black Turtle of the North, a stone stupa from the Northern Liang dynasty, and a couple of tombstones dating to the Yuan (c. 1271–1368) and the Tang dynasties. There were also many pái biăn (牌匾) or inscribed boards in other parts of the temple complex. 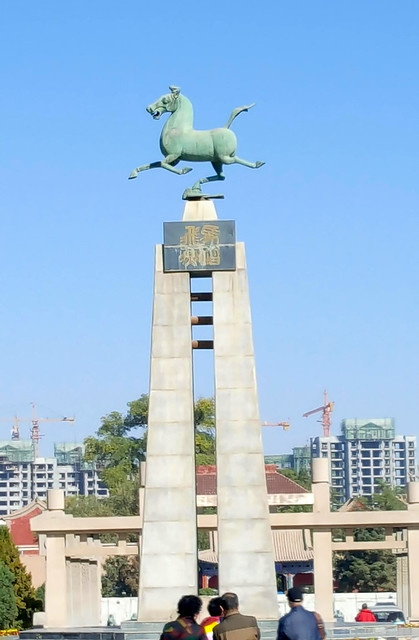 The second and final section of the temple complex we visited was a separate museum dedicated to the Western Xia Empire. This museum held two realistic portraits of Li Deming (李德明) (981–1032), founder of the Western Xia Empire, and his father, Li Jiqian (李繼遷) (963–1004), models of the city under Western Xia administration, a large map, the Western Xia Stela, and—most importantly—a woodblock print of the Sutra of Avalokitesvara, which was held in high esteem at that time. I dubbed the two-meter stela the Western Xia “Rosetta Stone,” as it had writing on it in both the Western Xia script (on the front) and classical Chinese (on the rear). According to our guide, the Western Xia script was an artificial script based on Chinese characters, designed by the high-ranking official Yeli Renrong (野利仁榮) (?–1042) under the Western Xia emperor Li Yuanhao’s (李元昊) (1003–1048) supervision in 1036. 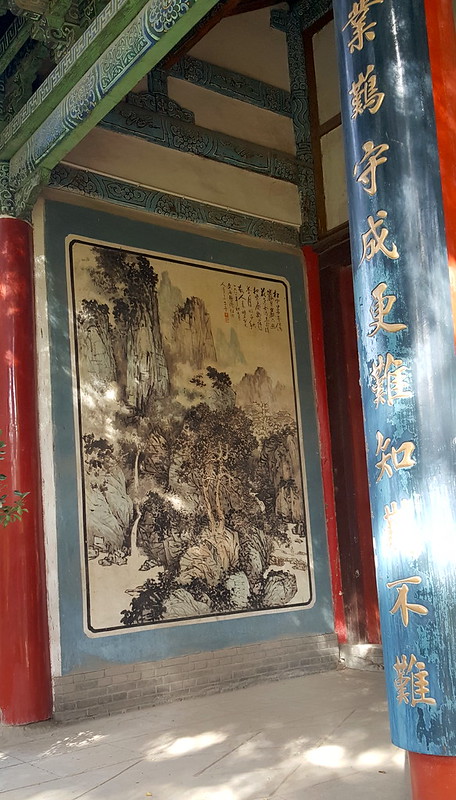 Personally, I regretted the fact that we did not spend as much time in the Western Xia museum as we did in the Confucian temple. I would have liked to have been able to absorb more information on the dynasty that commissioned so many beautiful murals in the Yulin Grottoes. However, according to our schedule, we were due to visit many other sites that day, so it was with a heavy heart that I left that peaceful temple complex.