Penang State in Malaysia is probably the most religiously diverse place I have ever visited. Walking around George Town, the capital city of Penang, I was completely enchanted by the density of different religious architectures. In the morning, Hindu deities at Sri Mahamariamman Temple are awakened in a puja ritual. Throughout the day, the sound of adhan, the call to prayer, can be heard from the minaret of Kapitan Keling Mosque. By the afternoon, I am overlooking the grand sea view from Kek Lok Si (極樂寺) on Penang Hill—the largest Buddhist temple in Malaysia.

As early as the beginning of the Common Era, Buddhism was introduced to the Malay Archipelago through Indian influence. However, Chinese Buddhism did not arrive until the second half of the 17th century, well after Islam had become the majority faith. When Chinese immigrants, mainly from Fujian and Guangdong provinces in southeast China, came looking for work and business opportunities, they also brought their beliefs and practices. The temple of Kong Hock Keong (Guang Fu Gong, 廣福宮) in central George Town is a telling example. The name “Guang” refers to immigrants from Guangdong, while “Fu” refers to those from Fujian as the temple was funded by 454 individuals and companies from the two Chinese communities. Since its construction in 1800, Kong Hock Keong has been one of the most important places in Penang for worshippers of Guanyin, the Bodhisattva of Compassion, which is why the temple is better known as Kuan Yin Teng (Guanyin Ting, 觀音亭). The entrance to Kong Hock Keong. Photo by the author

To me, this temple reflects several characteristics of Chinese Buddhism in Penang. First, it is a mixture of Buddhist, Daoist, and folk beliefs popular in southeast China. In the main hall, Mazu, a tutelary goddess of seafarers, is worshipped alongside Guanyin. Another hall houses a miscellaneous collection of statues, such as Guan Yu (god of martial arts), Wenchang Gong (god of culture), Zhusheng Niangniang (goddess of fertility), the Jade Emperor, the bodhisattva Ksitigarbha, and even Confucius. This is directly related to the second characteristic—orthodoxy is of secondary importance in the Chinese Buddhist community here. Indeed, many temples around Penang are run by lay Buddhists. As immigrants and an ethnic minority, their primary concern is to survive, and rites that grant protection have been given much more emphasis than scriptural texts. Third, Buddhist temples bind together Chinese originally from different regions in China. Chinese of the same locale and dialect group often build guildhalls, called Huiguan (會館), where they organize affairs among themselves. However, when a conflict occurs between groups of different origins, Buddhist temples provide a neutral place where good will and sacred witness are present. Up to this day, Kong Hock Keong has been managed by representatives of Guangdong and Fujian origins.

However, these factors are merely what was obvious to me as a tourist. To look beneath the surface, I reached out to the Malaysian Buddhist Association (MBA) located on 182 Burmah Road in Penang, where I was fortunate to have the opportunity to talk with Loo Keat Seng, the associate secretary. The MBA was founded in 1959. Its headquarters in Penang was constructed in 1971, composed of a Buddha Hall, offices, libraries, a kindergarten, and a free clinic. Loo explained to me that the MBA serves as a bridge between Buddhist temples, organizations, individuals, and the Malaysian government. While the government does not interfere with Buddhist activities, the association helps to ensure their religious needs are understood and fulfilled in this Muslim country. For instance, Vesak, a most important festival for Buddhists of all traditions as it commemorates the birth of the Buddha, was made a public holiday in Malaysia through the efforts of the MBA. The Buddha Hall of the Malaysian Buddhist Association. Photo by Miaochuan. From fo.ifeng.com

According to Loo, more than 20 per cent of Malaysia’s population are of Chinese descent, totaling around 6 million people. About 30 per cent of Malaysian Chinese identify as Christians, while the rest identify as Buddhists and Daoists, with a very small number of Muslims and other religious affiliations. However, Loo observed, the number of Buddhists who have formally taken refuge in the Three Jewels is much lower. The MBA has around 30,000 registered members. In terms of monastic sangha, a 2016 survey showed that there were 562 bhikkhunis and 372 bhikkhus in the Chinese Buddhist community. Loo added that since he first became interested in Buddhism decades ago, the number of female monastics has always surpassed that of male monastics. They receive full ordination either at the aforementioned Kek Lok Si, or in monasteries in Taiwan or Hong Kong. We have talked about the fact that Chinese Buddhism was first brought to what is now Malaysia and Singapore by immigrants from Guangdong and Fujian provinces. However, after they had settled and achieved great business success, Buddhists monks from the same regions followed, seeking to raise funds to build monasteries in their hometowns. Some of these monks returned to China, while others remained. Their role also shifted from merely performing rites to teaching the Dharma to local residents. For instance, Ven. Miaolian (妙蓮, 1824–1907), a highly respected Chan master from Fujian, was persuaded by his followers in Penang to stay during his visit. He would later found Kek Lok Si. Master Zhumo (竺摩, 1913–83), widely considered the “father of Chinese Buddhism in Malaysia,” was from Zhejiang Province. He established the Triple Wisdom Hall in 1965 as a major teaching center for Chinese Buddhism. The accounts of bhikkhus and bhikkhunis who have contributed to the development of Chinese Buddhism in Malaysia and Singapore are collected in a four-volume publication The Records of Chinese Buddhist Missionaries to the South (南遊雲水情), edited by Ven. Kai Ti (开谛).* 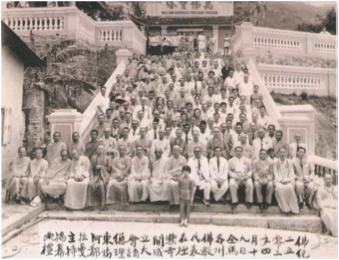 What is exciting about Chinese Buddhism in Malaysia is that it is still evolving. The monastic sangha is growing, albeit slowly, and interest in Buddhism has become more and more serious over the years. In 1969, the Malaysian Buddhist Institute was founded under the auspices of the MBA, providing a program of study that takes 4–5 years to complete. Students are required to learn traditional Chinese calligraphy and ink painting, as well as the Dharma. Today, the institute has a student body of 200, consisting of both monastics and lay Buddhists, some of whom go on to further studies in other Buddhist countries, such as Sri Lanka. Other established orders have also set up centers in Penang, such as Dharma Drum Mountain and Fo Guang Shan from Taiwan.

Nevertheless, this does not mean there are no challenges to Buddhism in Malaysia. Indeed, some might say there are simply too many religious groups in Malaysia. Loo himself was recently elected chairman of the Malaysian Consultative Council of Buddhism, Christianity, Hinduism, Sikhism, and Taoism (MCCBCHST). In the Buddhist community, one finds the Theravada Buddhist Association, the Tibetan Buddhist Association, the Young Buddhist Association of Malaysia, and a myriad of smaller groups. Although the phenomenon itself is positive, such division has potential issues. Management may not always be efficient and unity can sometimes be overshadowed by different voices. Since all Buddhists follow the teachings of the Buddha, Loo believes that they could better help Buddhists and contribute to Malaysian society by joining hands. In the years to come, he looks forward to more exchange and greater mutual support among the different Buddhist groups.

The Many Buddhas of Malaysia
Venerable Hāsapañña: Finding Contentment in Solitude
The Bodhi Group: Singing in Praise of the Buddha