Nurturing the Roots of Chinese Buddhism in Africa 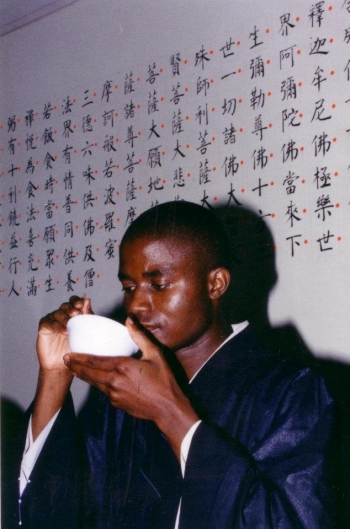 I was born Simon Manase Masauko in Malawi on 23 April 1978. I received the Dharma name Ben Xing, which means “awakening” or, more literally, “the original root of awakening,” in 2000 from the renowned Buddhist monk Venerable Master Hui Li, the first Mahayana monk from Taiwan to come to Africa and propagate humanistic Buddhism.

Ven. Master Hui Li, who had a vision of planting the seeds of the Buddhadharma among Africa’s youth, is one of the founding members of the African Buddhist College, which has since trained more than 500 monastics from the Congo, Madagascar, Malawi, Mozambique, Tanzania, South Africa, and Zimbabwe. He is also the founder of Amitofo Care Centres in Africa and across the world.

I was first inspired to study the Dharma after reading the book Mayflower II, On the Buddhist Voyage to Liberation by C. T. Chen, which enlightened me on several aspects of life and Buddhism’s unique approach and philosophy, and in 1999, I became one of six people from Malawi to undertake a three-year monastic training course at the African Buddhist College in South Africa. While at the college, the first challenge we encountered was adapting to cultural differences, including language and, above all, new religious beliefs, as I originally came from a Christian background. We studied and practiced humanistic Buddhism, which derives from Mahayana Buddhism. We would begin our day by waking up at 5:30am for spiritual practices. The first session was chanting sutras and mantras at 6am. We had breakfast at 7am, followed by monastic work. Classes started at 8am. Lunch was served at noon and classes resumed at 2pm, finishing at 3:50pm, after which free time was followed by dinner at 5:30pm and self-study at 7pm. Before winding up each day at 10pm, we would practice Samatha meditation from 9–9:45pm. I later encountered the same practices when I furthered my studies in 2002 at Tsung-Lin Male University in Taiwan under the Fo Guang Shan monastic order. We were asked to abide by the Five Precepts that all Buddhists live by, refraining from: harming living things, taking what is not given, sexual misconduct, lying and gossiping, and consuming intoxicating substances. The main teachings of the bodhisattva path are practicing with the goal of Buddhahood and salvation for all sentient beings. In 2003, I furthered my studies in Myanmar, practicing Theravada Buddhism at the International Theravada Buddhist Missionary University, where the teachings focused on self-salvation, vigorous meditation, and becoming an arhat. When I compare and contrast these two Buddhist traditions, I strongly believe that most of the basic concepts are the same, the most noticeable differences being some aspects of daily life and the routines of the monks and nuns. For example, in Mahayana, monastics eat food prepared in a communal kitchen, while Theravada monastics collect alms from door to door.

From my perspective, there are a number of difficulties and barriers to spreading the teachings of the Buddha in Africa, despite the Dharma itself being very applicable, complete, and perfect. This is because Buddhism, unlike other religions, does not actively seek to preach or convert people to follow its teachings. Compared with the other major religions in Malawi, such as Christianity and Islam, which actively proselytize, I view Buddhism as relatively isolated and I believe that the teachings will remain unpopular among the people of Africa for some time to come. Furthermore, many of the Buddhists that I’ve encountered over the past 15 years have, unfortunately, been rather self-concerned and individualistic and it sometimes seems that Buddhism has lost some of its humanistic qualities, even though it teaches the supreme wisdom of compassion, ethical responsibility, and prajna (wisdom), which can uplift human beings toward liberation and awakening.

In the minds of the majority of Africans, spiritual life centers mainly on a belief in supernatural powers, and evil is believed to come from the influence of Satan. Because of this mindset, it is very difficult for ordinary Africans to understand and accept the role of cause and condition, effects and consequences, thus karma and karmic retribution. These subtly profound fundamental concepts are difficult for most people to grasp, however I strongly believe that intellectuals with the capacity to understand could provide a platform for passing on the Buddhist teachings. Because of its willingness to assimilate traditional cultural practices, Buddhism has been accepted with relative ease in numerous societies. For example, in Sri Lanka, it assimilated Sri Lankan culture, in China, it assimilated Chinese culture, in Nepal, it assimilated Nepalese culture, and so on. Nevertheless, I believe it is difficult for Africans to fully understand and accept a religion that adopts their cultural values yet lacks the concept of a supernatural God. I believe the teachings would need to be decentralized and embrace many African traditions and cultures, while adopting and borrowing certain concepts from Christianity and Islam, in order to be fully accepted and appreciated by Africans. Moreover, the people who are seeking to propagate Buddhism in Africa speak Chinese, and perform Buddhist sermons, chants, and other activities in Chinese. In my view, this language barrier is another key obstacle to spreading the teachings of the Buddha in Africa, Malawi being no exception.

If Buddhism could adopt some of the ways and methodologies that the Catholic Church has applied in Malawi, I have no doubt that many people would embrace the religion and its profound teachings. In my view, the Catholic system of practice has similarities to Buddhism in that both have male and female monastic communities that practice celibacy and abide by a monastic code of conduct. Catholicism has prevailed and prospered in Africa because it has accepted African traditions and empowered a certain group of locals as representatives, while their missionaries have adopted local customs, eat local food, and speak the local languages. The Catholic Church has benefited and still benefits the locals at a national level, while I view Buddhism as conservative in its presentation and I think it will be some decades before it embraces Africans as family members.

Through the Dharma, I have learned the fundamentals and principles of the Four Noble Truths, dependent origination, equanimity, karma, and karmic retribution—i.e. the law of cause and effect, cherishing, gratefulness, compassion, loving-kindness, the art of transferring merits to society, constantly performing positive deeds, and, above all, the art of calming the mind through Samatha and Vippasana meditation. The Four Noble Truths and the Noble Eightfold Path are the most fundamental teachings that can rejuvenate body and mind to overcome stress, depression, engender good health, sharpen our mental faculties, and enable us to attain insight and apply wisdom in daily life. In a nutshell, I am truly grateful to Venerable Hui Li and to everyone who has contributed positively to the propagation of Buddhism in Africa as it has not only given me an opportunity to study and practice the profound teachings of the Buddha, but has also enabled many students from across Africa to study the Dharma. Buddhism still needs more support in terms of local pioneers who understand the teachings and its concepts on a deeper level and who can pass them on to others. We need resources such as English-language books on Buddhism, which can be distributed to all national and private libraries, primary and secondary schools, and universities. We also need to form local Buddhist associations that can present Buddhist ideas by calling on graduates of the African Buddhist College to be the torchbearers of the Buddhadharma.