Praying for Peace: Reflections on the Kagyu Monlam Chenmo The 34th Kagyu Monlam in Bodh Gaya, February 2017. From kagyumonlam.org

“We are what we think. All that we are arises with our thoughts. With our thoughts we make the world. Speak and act with a wholesome mind and happiness with follow.” The Buddha’s words in The Dhammapada.

Monlam is the Tibetan word for “aspiration prayer.” The ancient Tibetan canon boasts a plethora of texts of this category, written in verse with strict rhythm and meter, their content dedicated to generating a positive attitude toward the world and toward oneself. The Buddha revealed that the basic truth of existence is that everything arises interdependently from causes, the primary cause being the mind. The efficacy of Buddhist practices is based on this principle. Generating wholesome thoughts and emotions, and acting from the positive space within oneself leads to a better outside world as a result.

Group prayer practice, moreover, is thought to amplify this effect. The original purpose of the Monlam Chenmo (the Great Prayer Festival)—a 600-year-old tradition from Tibet—was to gather practitioners from far and wide to pray for the long life of Dharma teachers, the flourishing of the holy Dharma, and auspiciousness in general. Today, this ancient tradition is still alive and thriving at many Tibetan monasteries in India. Last February, for example, His Holiness the Gyalwang Karmapa Ogyen Trinley Dorje, the head of the Karma Kagyu school of Tibetan Buddhism, led the annual Kagyu Monlam Chenmo in Bodh Gaya. The event was attended by thousands of practitioners from all corners of the world, who were both physically present at the site and participated via webcast. All the participants gathered with the same aim—to generate positive thoughts and emotions that would remove obstacles to peace and set up conducive conditions for harmonious coexistence, based on strong faith and devotion. Karmapa reading from Geshe Potowa’s Long Soliloquy at the Kagyu Monlam on 26 February 2017. From kagyuoffice.org

The changes affected by the Monlam Chenmo can be felt more intensely on a personal level. Having just returned home to the Czech Republic, Karolina Horakova opened up about her experience at Bodh Gaya: “The experience helped me to resolve a painful burden I had carried in my heart. There is still some pain, but I feel I am on the right path toward healing now.” Also going by the name Sherab Lhamo, Karolina spent a year in northern India studying Bon philosophy and the Tibetan language, before joining a group of Tibetan nuns who were travelling to Bodh Gaya to attend the Dalai Lama’s Kalachakra initiation in January. She stayed at Bodh Gaya for three months after the initiation as the Karmapa took over the activities. Some of these activities turned out to be of historical importance, such as the Chakrasamvara empowerment and the reinstatement of full ordination for Tibetan nuns. 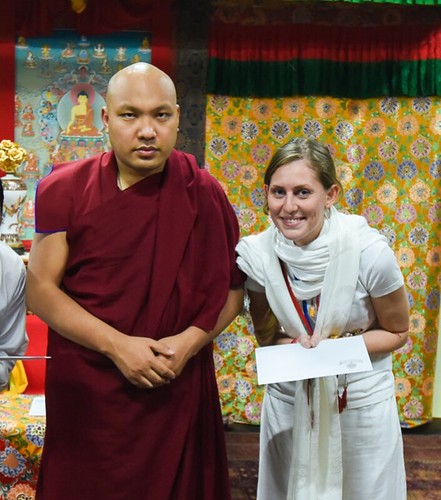 From dusk to dawn, on all seven days of the Monlam festival, Sherab Lhamo sat among thousands of fellow practitioners, both lay and ordained, chanting prayers in unison, making them resound over the sacred grounds of the Monlam Pavilion. Thousands of synchronized voices, thousands of minds focusing on a single emotion—unbounded, absolute love. Those moments—when the mind enters the meditative state just as the minds of those around you—can be intensely healing as the mind relaxes in a state of bliss that overcomes the worries of the heart. According to Sherab, her knowledge of the Tibetan language made her experience particularly powerful: “As I chanted the prayers, I could see the exalted meaning, which often gets lost in translation. In Tibetan, the overtones bring out the full meaning, which is so beautiful, so beautiful!” The Karmapa praying during the opening session of the 34th Kagyu Monlam Chenmo in Bodh Gaya on 13 February 2017. From kagyuoffice.org

Describing one of the profound experiences she had during the prayers, Sherab mentions: “I once visited Sri Lanka and loved the way Buddhist practitioners dressed in white for pujas as a symbol of the purification of karma and negative states of mind. I always wanted to experience that and my wish came true at the Monlam. His Holiness did not require lay practitioners to wear white just because it was pleasing to the eye. There is a quality of lightness and purity to the white color, which I noticed when I changed into my usual clothes in the evening—they felt so heavy. I felt a strong sense of purification while sitting in this sea of white, under the gaze of His Holiness, who seemed to be able to look inside each and everyone there. Every day, those feelings would bring me tears that I could not hold back. And I was, by far, not the only one.” Lay practitioners dressed in white inside the Monlam Pavilion. From kagyumonlam.org

Aside from his spiritual knowledge, the Karmapa is very hands-on and one of his many talents is being a meticulous planner. He carefully designs and overlooks all the aspects of the festival himself. As the formal sessions finish, he would get up first to leave the stage, as a traditional signal for the audience to rise and bow in respect. Once the bow is over, however, he would quickly enter the stage again, to direct his staff on the arrangement of the stage for the next session. He does so in a very animated manner, disregarding formalities. He would sometimes stay at the site for hours, moving among the now relaxed audience going about their business, some might even accidentally run into the Karmapa in the crowd: “Photography was not allowed during the sessions, so once one of the sessions had finished, I pulled out my camera to get a quick snap of the stage. I was struggling to get a good view because there was a monk in a hard hat that stood in the way. I was shocked when he turned around, and the monk turned out to be His Holiness!” laughs Sherab Lhamo. 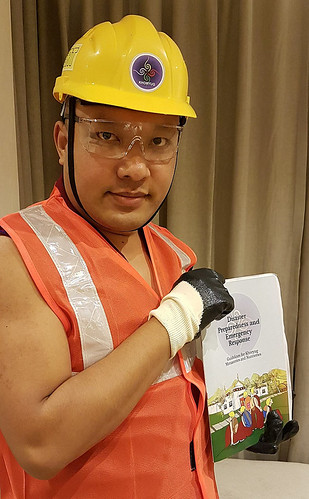 Those moments in which the Karmapa wandered through the crowd could lead to very powerful encounters. One such encounter took place when a Chinese nun fainted. A friend of Sherab, who is a doctor, rushed to help her. The Karmapa noticed the commotion and came to see what was going on. Once the situation was under control, the Karmapa looked around at all those that had rushed to help and said in a low, reassuring voice, “You’ll be fine, you’ll be fine.”

“Since that time, I have just had this feeling that everything will be fine in my life, whatever happens!” said Sherab with a contented smile.

The Kagyu Monlam serves as a forum to spread, preserve, and develop the Dharma. It is a place for practitioners to engage in wholesome activities, to practice Buddhism, to socialize, and to network. It is also a unique spiritual experience for each and everyone present. Everyone leaves the Kagyu Monlam with new inspiration and insight, which they apply to their everyday life back home, sometimes thousands of miles away. This can have a profound effect on the world. His Holiness the Karmapa summed up the purpose of the Kagyu Monlam in the following words:

“By training in compassion for three countless eons, the Buddha brought compassion to its perfection. Due to this, when he engaged in taming and subduing living beings, he was not limited to a single method but knew many different ways to benefit beings. This could be seen as a special aspect of the Buddha. Though we cannot do it exactly as the Buddha did, we are trying to use a variety of ways to plant the seeds of liberation, to create Dharmic imprints within the being of all those who have come.”