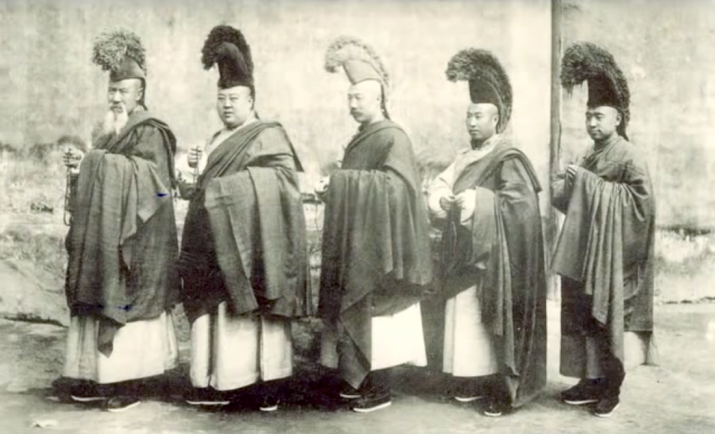 In 1895, a British army officer published a book titled The Buddhism of Tibet: Or Lamaism, with Its Mystic Cults, Symbolism and Mythology, and in its Relation to Indian Buddhism. Laurence Austine Waddell, perhaps the model for the cinematic adventurer Indiana Jones, was the son of an English clergyman who became a surgeon and chemist before joining the British army in 1880. He was sent to the colonies, where he served as a physician with the Indian Medical Service, first in India, then later in China, Tibet, and Burma.

In Asia, Waddell encountered Buddhism as a living religion, as opposed to the purely intellectual “philosophy” he had discovered in the scholarly works published a few decades earlier by European philologists such as Eugène Burnouf, Thomas Rhys David, and Max Müller. In Tibet, he was astonished to see how this tradition was practiced by the Tibetan people, and considered their religious culture, with all its rituals, ceremonies, hierarchies, costumes, and pomp, to be a degraded, superstitious form of ancient Indian Buddhism. It seemed to him very similar to Roman Catholicism, which, like many Protestants of the time, he despised. The military surgeon, however, like his fictitious avatar Indiana Jones, had both a passion for exotic adventure and an insatiable thirst for knowledge. He was especially interested in learning more about “Oriental” religions, and was seeking, like many intellectuals of his time, the origins of European culture. Waddell thought that traces of the European people’s ancestors could be found in the vast “Orient.” He later came up with the idea that the Sumerians (which he equated with the Aryans) were the source of Indian, Egyptian, and Greek cultures.

That is why, in spite of his disgust with religious hierarchies and rituals, Waddell became interested in Tibetan culture. He thought, acting like an archeologist, that he would find remains of an ancient Eurasian culture buried beneath the deep layers of “superstition” that the original Indian Buddhism had accumulated on its way to Tibet. He was looking for some kind of eternal spiritual truth hidden within the labyrinth of Tibetan religious traditions, just as a gemologist might look for rare and precious fossils caught in amber. The multiple layers of Bön, Tantric, Yogic, or Vedic practices he saw in the hybrid Buddhism of Tibet interested him too, as amber itself the gemologist. Each layer gave him an understanding of the various cultures that Indian Buddhism had encountered during its travels through Asia, and that was why “Lamaism” so fascinated him: it was a kind of museum in itself.

Waddell has been criticized by later scholars of Tibet for the unapologetic views he held on its religions, and for the comparisons he drew with Roman Catholicism. However, Waddell was not entirely wrong to note how culturally hybrid Tibetan Buddhism is. In fact, many scholars nowadays study dimensions of Tibetan Buddhism that could fit the “Lamaist” definition better than they do the conventional, modernist Dalai Lama’s view of Tibetan Buddhism as a “science of the mind.” These Tibetologists are now interested in the complex liturgies, the powerful religious institutions of the Tibetan people, their relationships with deities and demons, their ritual use of violence, their ceremonies and festivals, their sacred dances, the importance of relics, and so on. The truth is, Waddell had his own specific motivations for studying Tibetan Buddhism, which were very different from ours, and very much in tune with the spirit of his time; a time when European intellectuals tried to make sense of religious plurality and to write stories of humanity’s origins that could be more satisfactory than the traditional Book of Genesis. We cannot blame him for that. Instead, we should examine our own intellectual and ideological biases when we look for spiritual truth in the Tibetan religions. Nowadays, the word “Lamaism” seems to have disappeared from scholarly discourse. “Tibetan Buddhism,” a positive term that highlights and legitimates Tibetans’ identification as followers of the Buddha, is the common expression used to describe the Tibetan religion. The centrality of the Tibetan priest, the lama, has become secondary in the understanding of what this religion is all about. But has “Lamaism” completely died out? Does that notion definitively belong to the past—a past populated by nasty European colonialists and their derogatory, paternalist, or polemic views on the religions of other cultures? That is not the case at all, as recent developments in the history of Buddhism in the West have demonstrated.

Indeed, accusations of “Lamaism” have flourished on the Internet in recent decades. I use the word “accusations” because, contrary to the judgments Waddell and the people of his time made on Tibetan Buddhism, which were devoid of bitterness, there is anger and resentment at the heart of today’s “Lamaism.” The Westerners of today who use the word to talk about Tibetan Buddhism use it as a kind of reproach toward the Tibetan clergy, feeling that they have been betrayed. They thought Buddhism was a “science of the mind,” a wisdom, a compassionate way of life, as the Dalai Lama, his admirers, and the media after them assert. They trusted them; they went to Tibetan Buddhist centers to learn about the ancient, peaceful “spirituality” that would bring them true and lasting happiness. What they quickly found was the obligation to perform rituals and recite prayers to deities, to make donations, and—to them, the worst of all—to express devotion to a human person, the lama, the guru, who is said to be superior, almost divine, and the only way to salvation. That, they could not accept. Some of their fellow converts did, and seemed quite happy to do so, but others could not. It may have been some time before they realized that they were not practicing a simple and abstract “wisdom,” but a ritualistic, hierarchical religion. But they finally did, and what they saw was “Lamaism.” Those disillusioned practitioners also learned that, since the late 1970s with Chögyam Trungpa, who scandalized many converts and observers with his “crazy wisdom,” and since the 1990s, with renowned teachers such as Sogyal Rinpoche and Kalu Rinpoche (1905–89), both accused of sexual misconduct (and increasingly so following the YouTube revelations of the young Kalu Rinpoche), the perfect world of Tibetan Buddhism was not only populated by perfect beings. For those Westerners, the scandals became all the confirmation they needed that Tibetan Buddhism was perhaps not so Buddhist, and that they resulted from an aspect of Tibetan society that was not at all Buddhist. It was a relic from the past, from the time when Tibet had not been taught the Buddha’s words. Buddhism had been contaminated by other components of Tibetan culture. Buddhism had been buried beneath layers of customs and ageless superstitions, upon which the privileged lamas had built their wealth and authority. The religion of Tibet is “Lamaism.”

It is interesting to observe how, over the course of a century, the notion of “Lamaism” has been used, forgotten, criticized, forbidden, and finally dusted off again to be used as a transgression or provocation by frustrated converts. When Waddell used it in the 1890s, he had in mind, as most Westerners do today, the idea that Buddhism is an egalitarian, individualistic, and rational philosophy. When he discovered that Buddhism in Tibet was not practiced and understood in those (modern, Western) terms, he was not disappointed: he accepted things as they were; the surprising reality he discovered even stimulated his curiosity, because he was motivated by the desire to know. To know the origins of mankind. That is why he produced such a voluminous and detailed account on the religion of Tibet. Many Westerners today have a very different relationship with Buddhism: not that they do not wish to know, but first and foremost they wish to experiment and feel, in their minds and bodies, an inner transformation. They are ready to give anything for a taste of bliss, and they are full of trust. The fact that Tibetans cannot provide eternal happiness is therefore crueler than the simple encounter with cultural otherness—Waddell’s experience. They may use the same word “Lamaism,” but the meaning with which they imbue it is profoundly different. They are expecting happiness; Waddell was expecting knowledge.

Waddell, Laurence Austine. 1895. The Buddhism of Tibet: Or Lamaism, with its Mystic Cults, Symbolism and Mythology, and in its Relation to Indian Buddhism. London: W.H. Allen & Co.

Marion Dapsance, a Robert N. Ho Family Foundation/ACLS postdoctoral fellow, received a PhD in Anthropology from the Ecole Pratique des Hautes Etudes (Sorbonne), Paris (also attended by Alexandra David-Neel!) and published her dissertation on Sogyal Rinpoche’s sangha (Les dévots du bouddhisme, Paris, Max Milo, 2016). Currently in residence at Columbia University’s Department of Religion, she is working on an intellectual biography of Alexandra David-Neel. She can be contacted at mdapsance@gmail.com.