Sacred Geometry and the Sri Yantra

I remember once, as a child, accidentally spilling some sugar over the table and wondering to myself, “How come each grain has its place?” I mean, the sugar did not seem to scatter randomly . . . the grains were kind of symmetrically arranged. I stared at my little arms, gazing at the hair that grew out of my skin. Each hair had its place. For the first time, I felt that some kind of greater intelligence had placed the grains of sugar, just as it had placed the stars and planets in space.

Let’s take a look around us—the place you set up your computer, your furniture, the mug on the table, your books, the mess of clothes in your bedroom, the microscopic dust floating between your eyes and this screen—they all have their own place in relation to each other. Without having thought you arranged things like that, and things were arranged like that without thought. The order doesn’t matter. We follow a pattern of form—not only what grows in nature, but also in the way we move and place objects, how we arrange the thoughts in our minds. They follow a logic, a cycle, a shape, a proportion . . . and it seems somehow to be related to a formula—there is something “else” defining us! In the West, this is called sacred geometry, and the Fibonacci sequence, the mathematical constant known as pi, the Golden Ratio, and the Flower of Life all explain these patterns in the reality of shapes as mathematical formulae. Believe or not, but I think that even our own alphabet was already written on the wings of the butterflies! Take a look at what Norwegian artist Kjell Sandved photographed for a project he called The Butterfly Alphabet. Seeing this, we can witness similar phenomena elsewhere: cut open an apple or a papaya and see the star shape around the seeds; trace the pattern created as Venus and the Earth travel around the sun, once again the shape of a star; examine the core of a sunflower, or the petals of a flower. Some patterns are repeated throughout universe, from a micro and macro perspective.

Sacred Geometry is said by some to be the proof of God’s existence and the intelligence behind all creation (I think it’s not so much “behind” as in plain sight!), and that perhaps God is creation itself! It reminds me of of the Buddha’s words from the Heart Sutra: “Form is emptiness; emptiness is form.” By understanding form we can also understand emptiness, the very complex Buddhist principle of “emptiness.”

By contemplating matter, we can understand spirit, and vice versa. Both are simply intrinsic aspects of the same “thing.” Wherever we look, there is always the divine manifesting, without discrimination, or judgment, or prejudice, because all that exists is driven by the same intelligence. The Fibonacci sequence is a series of numbers in which each number is found by adding up the two numbers before it. From educateinspirechange.org

Look at some other profound images, such as the studies of Leonardo da Vinci and so many others. Look at the art of Islam, where divinity is represented by infinite geometric combinations. All artists, whether or not they are conscious of it, are driven by a higher law than their own ideas. We are all a response of the universal flow and our biggest illusion is our sense of individuality, probably due to the optical illusion that we seem to be separate from one another when we are, in fact, just tiny pieces that complete the perfect order and shape of this universal “Being,” or we could say, “Universal Consciousness,” or . . . God. 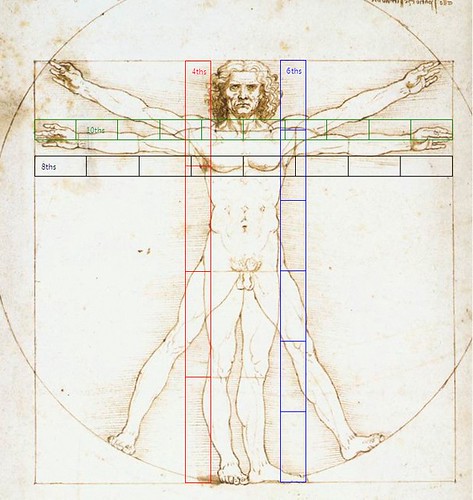 The Vitruvian Man, c. 1485 by Leonardo da Vinci. From goldennumber.net

The Vedas show that this knowledge was already understood thousands of years ago. They drew geometric shapes to represent each kind of energy manifested by this intelligence. They gave them names (deities) and sounds (mantras), for our better human understanding. Those shapes are called yantras.

The best known of all yantras is the Sri Yantra, which represents the forces that shape all forms in the universe, through two opposing forces: Shiva, the masculine energy and Shakti, the feminine energy. Shiva is represented by triangles pointing upward, and looking at them we can think of a mountain, an arrow, a flame, symbols for stability, meditation, assertive action, and fire. Shakti is represented by triangles aligned downwards, reminding us of a container, a uterus, standing for receptiveness to create. All creation, all that moves, dances, grows, breaths is Shakti. And as colors need an empty canvas, as music needs silence, as dance needs empty space, so Shiva and Shakti are interdependent, like the energies within us. Sometimes we are like more Shiva—silent, meditative, concentrated, sharp—and sometimes a little more Shakti—creative, intuitive, wise, magic, and unpredictable. Someone “harmonious” is someone in balance with their female and male energies, working in a dancing and pleasing flow.

The triangles are basically expressed in all yantras. The Sri Yantra is specifically dedicated to the goddess Lalita Tripurasundari (intelligence/energy), “she who plays.” All creation, manifestation, and dissolution are considered to be a big, fun game in front of the goddess. Lalita, too, has three aspects: the young, the pretty, and the terrible. Those three aspects are also what the Hindu Trinity means by Bhrama (creator), Vishnu (preserver), and Shiva (destroyer), which perpetuate the universe in infinite cycles.

To meditate on the Sri Yantra is to open one’s eyes to the mystery, which is easily revealed when we observe, when we open our eyes to it, when we stop looking at our feet and lift our eyes to the expansive sky and stars above. 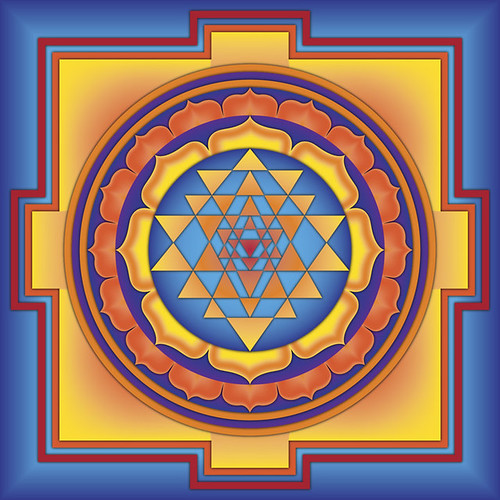 The Sri Yantra. From douglaspfeifer.com

When you practice with a yantra, you can place it just in front of you in a way that you can gaze at it comfortably for as long as necessary. When you finally close your eyes, you can still see the image fixed by light upon your retinas. You can imagine this form directly between your eyes, in the position of what we call the “third eye,” also the location of the pineal gland, which is sometimes known as an antenna for the universe’s energy. Breathe with the yantra, and feel yourself entering a new space.

The first “wall” you’ll enter is the square, or the bhupur, which represents the earth element and protects the sacred ground. Crossing it you’ll see a circle of 16 petals, known as the “wish-fulfilling circle.” Those are specific wishes to gain conscious in all of the sense organs it is possible to experience in this world. The second circle is of eight petals and represents the means through which we experience the world, such as speech, pleasure, rejection, biological impulses, and so on. At this point you realize that you know the world only through those senses, and you can ask yourself, how do you know who you are? You may suddenly sense that there is no differentiation between what is “out there” and “in here;” me and you; what is being lived and the one who lives it.

When you arrive at the triangles, you remember Lalita, accepting who you are right now, because your body, your thoughts, and your necessities change all the time—this is the engineer of the universe of which you are intrinsically a part. To surrender to this notion of ‘oneness’ is the experience that which the Sri Yantra brings to us.

Cross the walls of perception, leave limitations behind, and open your true eyes!