Solidity and Spirituality in the Works of Miya Ando 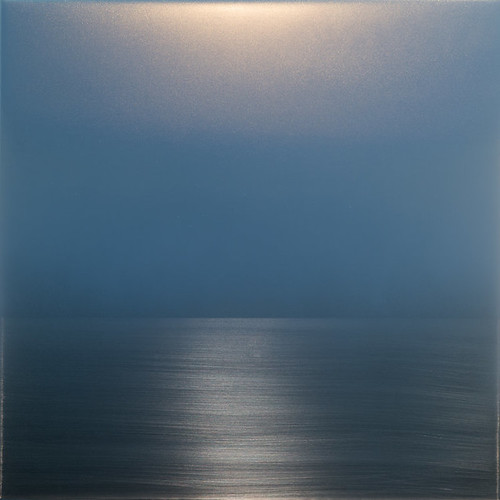 Miya Ando’s painting Yugen Gold Blue is a Zen koan of sorts. The nocturnal seascape, lit by the hazy glow of a rising moon, is at once a portrait of emptiness (Skt: sunyata) and a representation of the profound nature of the universe; a vision that would not seem contradictory to Buddhist practitioners. Rendered on aluminum using techniques inspired by those of ancient Japanese swordsmiths, the work is solid and rich in surface texture, the delicately detailed waves recalling the subtle hamon pattern* along the edge of a masterfully forged sword blade. The gentle hint of light reflected on the sea’s surface infuses the work with a suggestion that there is much lying beneath the calm surface, as implied by the Japanese word yugen, which means “mysterious” or “suggestive.” Though often highly industrial and technically painstaking, many of Ando’s works—from her metal paintings to her works in graphite on paper and her Bodhi leaf mandalas—possess a meditative quality and sense of yugen, born from Ando’s own cultural roots and her ongoing Buddhist practice. Ando was born in Los Angeles to a Japanese mother and Russian-American father. She spent much of her childhood with her mother’s family in Okayama, Japan, where her grandfather was the head of a Nichiren Buddhist temple, and she grew up surrounded by Buddhist priests. When she was about seven years old, she moved with her family to the Santa Cruz Mountains in Northern California, where she lived among spectacular redwoods. As a child she encountered a local bronze sculptor and was captivated by the idea that she, too, might be able to create works of art like his sculptures and the objects she had seen in her family’s temple. She continued to explore Buddhism and Buddhist art by majoring in Eastern Asian Studies at the University of California, Berkeley, and went on to study Buddhist iconography at Yale University. At that time, she was offered a rare apprenticeship near her Japanese family home. Formerly Bizen Province, Okayama was heart of the Japanese sword-making tradition. Her mother’s family, as well as being members of the Buddhist clergy, descended from a long lineage of Bizen sword makers, and Ando is the 16th generation of this line. For a year, she studied swordsmithing at Hattori Studio in Okayama and then returned to the US, committed to pursuing a career as an artist and to finding “a vocabulary that was neither Eastern nor Western.” During the decade or so that she has been a working artist, Ando has employed her metalworking skills to create minimalist paintings, powerful abstract sculptures, and public art installations that have been shown in museums, galleries, and public spaces around the world. The abovementioned painting, Yugen Gold Blue, is a recent contribution to a body of work that Ando has created by painting on sheets of aluminum with chemicals and then manipulating color and texture using heat, sandpaper, dyes, and other processes. The works range from subtle and monochromatic to dazzlingly colorful, like her 2014 Shiki (Four Seasons) painting that comprising 80 squares that feature a range of luminescent hues. Although her works are often described as abstract, minimalist, and even “post-minimalist,” they contain tremendous spiritual depth, typically exploring such Buddhist themes as transformation, perception, meditation, emptiness, and healing. Her 2010 installation titled Meditation 1-12, commissioned for The Healing Place, a rehabilitation center in Louisville, Kentucky, is a powerful example of such exploration, both by the artist and her audience. Ando was commissioned by the center to create work that was spiritual but non-denominational, so she chose to focus on the transformative power of shifting light. Arranging 12 rectangular steel panels treated with patina, pigment, and lacquer in a horizontal row that wraps around the curved wall of the center’s chapel, she produced a calming series of metallic seascapes that allows visitors to the chapel to gaze deeply into the infinite as they also look inward and heal themselves.

A very different but equally emotionally powerful work created the following year is her 9/11 Memorial Sculpture, constructed from steel salvaged from the World Trade Center buildings at Ground Zero in New York City. The powerful abstract sculpture, which seems to emanate both strength and vulnerability with its dented, rusted form that towers skywards, is now permanently installed Zaha Hadid's Aquatic Centre at Queen Elizabeth Olympic Stadium, London, as a symbol of remembrance and healing. 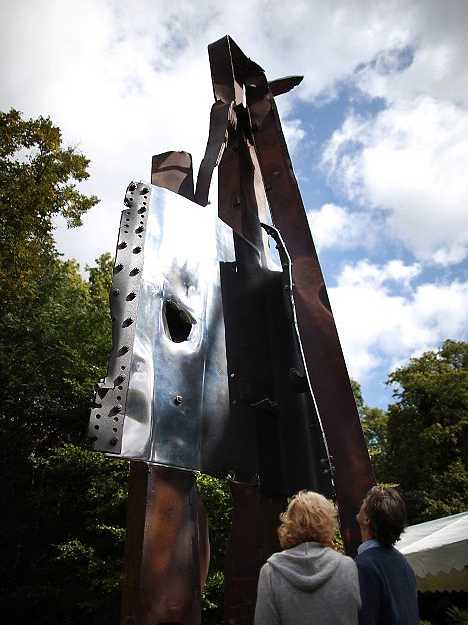 For many of her works on paper, she also employs metal, creating unique effects on the soft surface of the paper that similarly emanate great spirituality. In her Gekkou (Moonlight) series, she coats the surface of the paper with silver leaf and then treats the silver with pigments to produce the luminescence of moonlight, while in another series titled Rust (ongoing from 2003), she coats paper with iron powder mixed with a medium, and then applies water over certain areas, causing them to rust into rich, russet fields. However, it is arguably with the mineral graphite that she creates some of her most contemplative works on paper, in particular those works that are inspired by Buddhist prayer and meditation. This series includes Zen circles, or enso, images made with a single brushstroke but said to symbolize the entire universe and used by Zen practitioners as focal points during meditation, as well as works that refer to specific Buddhist prayers. Her circles, rapidly brushed in graphite on to the paper’s surface, exhibit a spontaneity, delicacy, and lightness of spirit that is not always apparent in her works on metal. 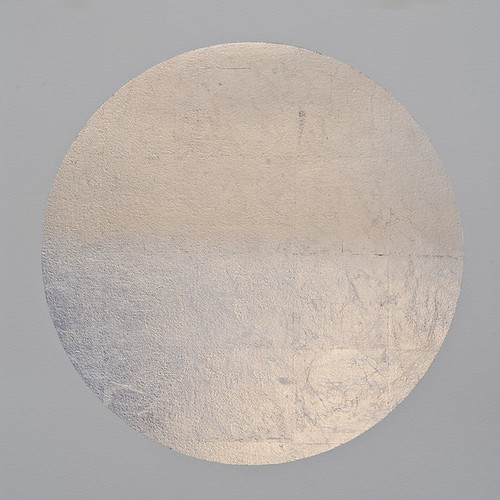 In the large 2010 work Prayer Scroll, Ando evokes the dynamic, monochrome brushwork of Zen calligraphy with a bold Chinese character filled with tiny inscribed prayers. Ando painted the character, 忍 or shinobu, meaning “endure” onto the paper in powdered graphite mixed with a medium, and then used a metal point to burnish one of the most popular Buddhist chants, “Namu Myoho Renge-kyo,” (“Praise to the Lotus Sutra”) repeatedly in Roman script into the character. Below the strokes are the ghosts of two sets of prayer beads, used by practitioners to keep count as they chant their prayers over and over again. Using the beads themselves as a sort of stencil when applying pigment to the paper, Ando has created in this composition a haunting abstraction of the act of Buddhist prayer, a process that the artist has found invaluable as she explores her own artistic and spiritual heritage through her art. 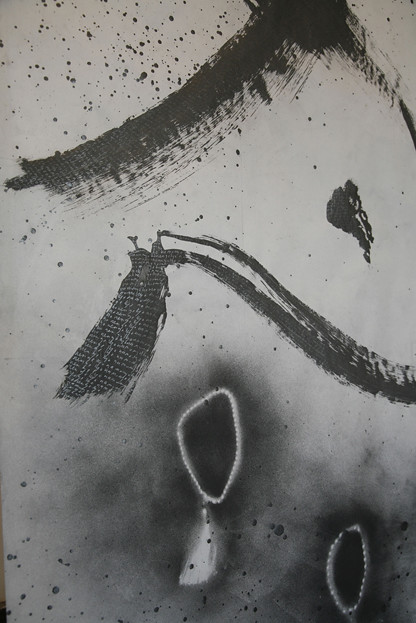 Recently, Ando has also been exploring the practices of prayer and meditation using materials that are the antithesis of her solid minimalist paintings on metal. Using the delicate skeletons of hundreds of leaves from the Ficus religiosa tree, also known as the Bodhi tree—after the tree under which Shakyamuni is believed to have attained enlightenment, she has created a number of new works that radiate fragility and ephemerality. For her Skeleton Bodhi Leaf Mandalas, she dyes leaf skeletons and assembles them carefully to form an exquisitely layered floral pattern resembling a mandala, a depiction of the sacred realm of an enlightened being that is used by Buddhists in meditation practices and rituals. In the imagery of Mahayana and Vajrayana Buddhism, a mandala is an architectural structure built up of geometric shapes, typically painted in bold mineral pigments or even constructed from wood or metal. Ando’s mandalas, with their shadowy layers of dried Bodhi tree leaves that imply both enlightenment and death, even more powerfully convey the illusory and transitory nature of life. 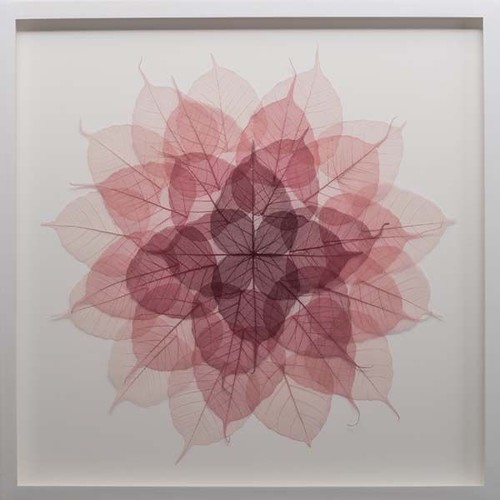 Ando has also recently employed Bodhi leaf skeletons in a number of installations. In her 2015 work Ascension Leaves, she grouped together multiple strings of skeleton Bodhi leaves and hung them from the ceiling of the lobby of the Montefiore Hospital in New York to form a pale blue crystalline cloud. A year later, she was commissioned by the Nippon Club in New York to create a temporary public installation as a memorial for the victims of the 2011 Tohoku earthquake and tsunami. Titled Meditation Room, the work includes a platform of two tatami mats surrounded by a delicate wall of pale pink Bodhi leaf skeletons enclosing a private meditation space into which visitors may enter to reflect upon life and loss. At the edge of the enclosure are an incense burner and two pairs of traditional Japanese geta shoes, sculpted by the artist out of steel and positioned symbolically slightly outside the space, as if a parent and child have removed their shoes to step up onto the tatami.

In this installation, as with all of Miya Ando’s work, the Buddhist belief in illusory nature of reality and the Japanese concept of yugen are both masterfully manifested. Her delicate curtain of floating Bodhi leaves encloses and embraces the meditation space, inviting tranquil reflection. However, it is in the heavy steel shoes, crafted using ancient Japanese metalworking skills, where the spiritual heart of this work is on display. Suggesting the absence of those who lost their lives in the disaster, Ando provides a solid metal reminder of the fleeting, transitory nature of life. * In swordsmithing, hamon is a visual effect created on a sword blade by the hardening process. It appears as a pattern along the portion of the blade that contains the cutting edge.