Stepping into the Mandala – A Journey to Ankor Wat 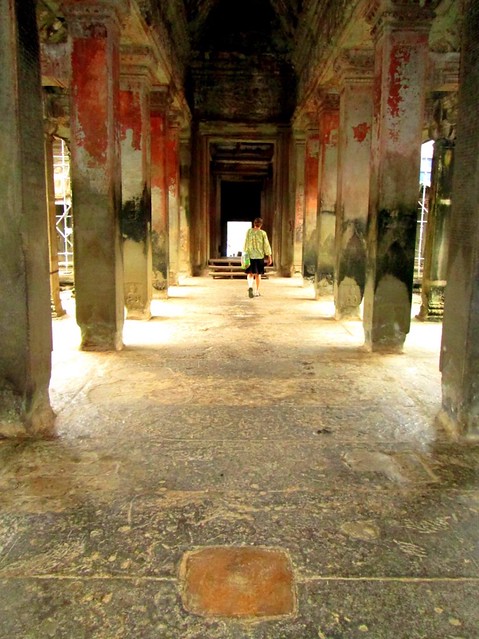 I have practiced visualizing and making mandala offerings for years, but when I entered the main temple at Ankor Wat, I found myself stepping onto the center of the universe—the mythical and symbolic crossroads of Mt. Sumeru, the supreme mountain. I stood in the three-dimensional mandala sprung to life, marked by a square, rust-orange stone. Sumeru (Sanskrit: सुमेरु ) is a mountain in ancient Hindu mythology. It is also the name of the central world-mountain in Buddhist cosmology. Ankor Wat, Khmer for “Capital Temple,” is a sprawling and impressive series of temples laid out as a city, originally Hindu, later Buddhist. Having withstood the elements, evolving cultures, destructive regimes, this spiritual focal point has remained immovable over the centuries. The center of the physical, metaphysical, and spiritual universe in Hindu, Buddhist, and Jain cosmology, this sacred mountain with five peaks was instantly accessible to me as I stood there, drawing upon my training in mandala offerings.

In the Vajrayana preliminary practices, in particular the Dudjom Tersar Ngöndro, the mandala offering is the third of seven sections. One visualizes Mt. Sumeru with a central high peak and four subcontinents in the cardinal directions. Whether forming a mandala mudra with one’s hands or offering an elaborate physical mandala heaped with grains or jewels, the experience is unique: enacting in miniature symbolic form the offering of every kind of imaginable treasure and wealth. The foremost offerings are the high peak, four surrounding peaks, and eight subcontinents, jewel mountain, wish-fulfilling tree, wish-fulfilling cow, and so on—a list of delights for the senses and the imagination. Although originally Hindu, Ankor Wat has been a Buddhist temple since the late 12th century. It has gone through many transformative and destructive phases, like humanity itself, but has withstood those challenges and endured through generations. The energy there is pervasive; from the sculptures, halls, and arcades to the stone-upending trees and the magic suspended in heavy, humid air. The destructive power is apparent, as is the reviving power of faith. Some beheaded Buddhas and nagas have been repaired, while others, still decapitated, are draped with brilliant orange and saffron bejeweled fabric. Visiting devotees, daily monks, and even the tourists walk among layers of consecrated deity, awed by the power emanating from ancient walls, towers, and the ever-watchful apsaras and devatas, female dancers and guardians. I set out for Ankor Wat on an archaeological pilgrimage, but it became a spiritual one as the visit deepened. Of the many sacred places sought by pilgrims—Mecca, Lumbini, the Western (Wailing) Wall, Bethlehem, the Haggia Sophia, Macchu Picchu, Stonehenge, Bodhgaya, Lhasa/Jokhang—I always imagined myself seeking out the Tiger’s Nest in Bhutan, a temple for practice and offerings at which so many of my lineage masters and teachers have stayed. So, I was surprised to experience a real awakening at Ankor Wat, especially grounded in deep Hindu and pre-Buddhist roots. If the essence of outer pilgrimage is to journey to one’s spiritual home, then perhaps the inner journey is to return to one’s own true nature, in whatever setting is conducive. One of my Dudjom lamas describes meditation as, “Cultivating intimacy with perfection, with timeless awareness.” Surely one need not go anywhere at all to achieve this, so what then is the draw of outer pilgrimage? Having performed it in a rather roundabout way, I’d reflect that the experience closed some kind of previously unconscious gap between lore or history, story and teaching, and the embodied sense of having come home to my place in the mandala. The outer veils of Eastern and Western, gender and time, fell away and I was in the center of the universe, the cosmos both elemental and deified, without needing to be a “me.” I had a similar experience in the large temples of Bangkok, which I hadn’t felt before in the Americas. I was immediately at ease and surrounded by celestial family, sensing the deep history of practitioners of many faiths, literally under my feet and in the atmosphere all around. Even though I’d spent years in Buddhist gompas in the US and Brazil, being in the center of the ancient and incomparable temples of Ankor Wat and Bangkok, at the heart of Buddhist country was truly a homecoming.

Finding center, coming home, is not always dependent on where we are geographically, spatially, or psycho-emotionally, but rather relies on our state of mind, our willingness to awaken in every new moment to the history, the present, and the future as three sides of a wholeness of truth. May we all have the good fortune to experience a homecoming to our own true nature, whether in an exotic new place, within the comfort of the familiar walls of home, or surrounded by the beloved sangha in our chosen places of devotion. Look ye on Visnu’s works, whereby the Friend of Indra, close-allied,
Hath let his holy ways be seen.
The princes evermore behold that loftiest place where Visnu is,
Laid as it were an eye in heaven.
This, Visnu’s station most sublime, the singers, ever vigilant,
Lovers of holy song, light up! *

With special thanks to Mac McCarty.

The Religion of the Future
“What If” Wonder Woman
Change from Within: Creating a World of Hope, Love, Compassion, Empathy, and Forgiveness