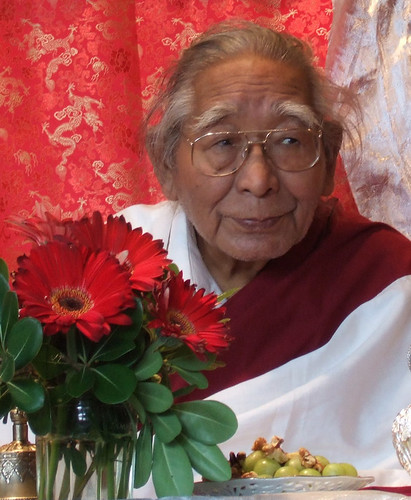 “It is not just some old-fashioned custom to cultivate the foundational practices and tantra before doing Dzogchen. This is not an old custom—it’s the custom. If you call it an old custom, that already means you are throwing it away.” - Khetsun Sangpo Rinpoche (Strand of Jewels, pp. 205–6)

More than a presentation of the fundamental aspects of Dzogchen practice, in Strand of Jewels Khetsun Sangpo Rinpoche acknowledges the twin bad habits of impatience and arrogance which characterize the Dharma practice of so many Westerners and offers advice on how to overcome them. Rinpoche’s advice is sound: 1) connect with a qualified Dzogchen master and 2) do what the master says, even if one doesn’t want to.

Anne Carolyn Klein has compiled and translated Strand of Jewels masterfully. Presented in three sections, it is both a logical and an orderly read. Part One, the root text, was written by Rinpoche and is based on the wisdom gained from a lifetime of insight and devotion to his lama, Kyabje Dudjom Rinpoche, the Three Jewels, and the practice of Dzogchen. Part One is in essence a spiritual poem, though not recognizable as a poem in the Western sense. Experienced Dharma students will find that Part Two, Rinpoche’s commentary on the text, suffers the fate which befalls any poet when asked to describe his work of art. As author Rick Riordan so aptly phrases it in his best-selling novel The Titan’s Curse (2007), “You might as well ask an artist to explain his art, or ask a poet to explain his poem. It defeats the purpose. The meaning is only clear through the search.” Adroit Dharma students will gain a great deal from searching Part Two. Part Three, entitled “Khetsun Sangpo Rinpoche: Episodes from a Life of Practice,” is comprised of two Namthar—a spiritual biography designed to highlight certain episodes from the subject’s path to awakening. The first was written, presumably, by Klein (the chapter is not attributed to any author), and the second composed by Rinpoche himself. Overall, Strand of Jewels is concise and clear, and supplemented with the expected technical notes, bibliography, and English-Tibetan/Tibetan-English glossary. The numerous Question & Answer sections, in which students pose the questions, may be off-putting to a newcomer to Dzogchen (example, “Question: What is the relationship of the sheer essence dimension to the allground?”), but readers familiar with this material will find these Q&A useful.

Born in 1920 in central Tibet to a family of ngakpa (a tantric adept who performs exorcisms, acts as a community healer, and who most famously controls the weather; a ngakpa’s ability to forestall a hailstorm was essential to a people used to watching their meager barley fields reduced to chaff by a sudden onslaught from the sky), Rinpoche was never encouraged to follow this unique path, but through sheer force of will and fortunate karma, accomplished the marvelous achievements that characterized his life.

To his students, he was a Buddha. To scholars of Tibetan hermeneutics, Rinpoche was comparable in stature to the great translators of medieval Tibet, Marpa Chökyi Lodrö and Vairotsana. To academics, his magnum opus, the 12-volume Biographical Dictionary of Tibet and Tibetan Buddhism, is nothing short of magnificent. Many Dharma practitioners will know of him through his two other extant books in English: Tantric Practice in Nyingma, first published in 1982, which concerns the preliminary practices (T. ngöndro) of the well-known Longchen Nyingtik tradition; and his 2006 translation of and commentary on Mipham’s Fundamental Mind.

By way of context, the term “Dzogchen” is a portmanteau of the Tibetan words Dzogpa and Chenpo. In English, the term commonly used to translate “Dzogchen” is “Great Perfection”; the more accurate translation “Great Completion” is currently in favor. “Dzogchen” refers to the corpus of teachings revealed over 1,000 years ago to various Himalayan seers by way of visionary encounters with etheric beings of the unseen realms of the Vajrayana. From that ancient provenance to the present day, these arcane teachings have been communicated from master to disciple in a continuous chain of revelation. The disciple, typically, would have been a yogi or ngakpa who was determined by the lama to be a “worthy vessel” for the teachings. These worthy vessels only received the full transmission of the Dzogchen teachings upon completion of the arduous preliminary practices and mastery of the complex visualizations and practices of Buddhist tantra. Not until then would the lama grant the key to the student, through the ageless tradition of Buddhist empowerment. 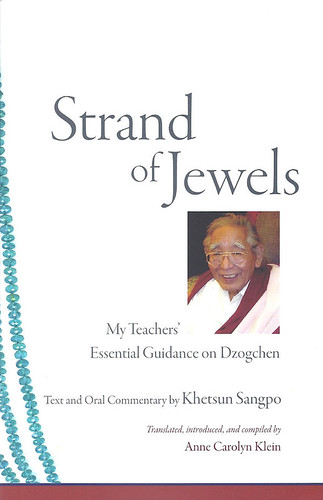 Strand of Jewels. From dharmatreasures.com

Most Western Dharma students suffer from impatience and arrogance approaching hubris, complaining as they (myself included) do of not having the time, the opportunity, or the inclination to practice. Also, with the peripatetic lives of many lamas today, actually sitting at the feet of a Buddhist sage is not feasible. Rinpoche laments: “Sometimes students who have read something about Dzogchen with other teachers come and ask me about it. But I always tell them, ‘Please do the foundational practices before you come to talk with me.’ Sometimes I tell them to learn Tibetan, too. They get upset, even angry, and leave. They leave and read some books, perhaps not even receiving teachings related to it, and such books become the basis of their understanding of Dzogchen” (p. 205). In Strand of Jewels, Rinpoche wrestles mightily with this reality. He writes, “In Tibet, practitioners in Dzogchen lineages move from the bottom to the top of the mountain; we here today are in unusual circumstance, teaching from the top of the mountain” (p. 205). One can feel Rinpoche’s melancholy as he places culpability on both master and disciple: “How did this come about? That Dzogchen has become such a famous teaching rests on the shoulders of both teachers and students. Students take great interest in it since they want what is exalted and renowned, and they really press on their teachers to receive it. Teachers want to please their students, so they teach it” (p. 205).

This attitude is what sets Strand of Jewels apart from so many of the 300 other available books on Dzogchen. Rinpoche’s insistence that only by completing the preliminary practices under the keen eye of one’s chosen Dzogchen master, and by cultivating a thorough understanding of Buddhist tantra, can one approach Dzogchen with any efficacy. Even under the best conditions, these preliminary practices will be physically demanding, emotionally draining, and intellectually challenging. However, throughout Strand of Jewels, Rinpoche stresses that spiritual maturity arises from the practice of ngöndro and makes it abundantly clear that while the precious, esoteric Vajrayana teachings are now available to a Western mass market hungry for their literally timeless message, the true, secret, and actual meaning of the teachings can only be revealed by a master to a highly prepared and worthy disciple.

In the end, Strand of Jewels confirms the legacy of Khetsun Sangpo Rinpoche, one of the last of the generation of awakened masters to have been born and trained in pre-holocaust Tibet. Both informative to casual readers and newcomers to Buddhist practice and encouraging to experienced students of Dzogchen, Strand of Jewels is a blessing for all sentient beings. SARVA MANGALAM!

Strand of Jewels, by Khetsun Sangpo Rinpoche and compiled, translated, and introduced by Anne Carolyn Klein (Rigzin Drolma), was published by Snow Lion, Boston & London, in 2015.