Strings of Enlightenment: The Beauty of Buddhist Prayer Beads Prayer beads are an important part of Buddhist practice and ritual throughout Asia and beyond. Although they are generally regarded primarily as tools to aid practitioners in counting their prayers, mantras, incantations, and repetitions of the names of deities, these strings of beads can be some of the most exquisitely crafted objects in the Buddhist artistic realm. Made of materials as diverse as wood, crystal, and precious gems, and strung together in varying sizes and quantities, Buddhist prayer beads, or rosaries, can be as beautiful as they are powerful. Symbolizing important Buddhist concepts, these beads not only serve a role in rituals, but also feature prominently in paintings and sculptures of Buddhist teachers and deities.

Prayer beads, or mala in Sanskrit, were likely introduced into Buddhism early in its history from other proto-Hindu religious practices in South Asia. Some Buddhist rosaries are small, made to be worn around the wrist or held in the hand. Others, however, are long enough to be worn as necklaces by priests, typically in the esoteric traditions of Tibet and Japan. For priest and lay Buddhist alike, the beads are symbolic of the teachings of Buddhism in structure, the number of beads, and the material used. Before being knotted, the string is passed through a large central bead and two smaller beads. These three additional beads keep the others in place and indicate the completion of a cycle of telling. They are also said to symbolize the three jewels of Buddhism—the Buddha, the Dharma (his teachings), and the Sangha (the monastic order). The hidden string that passes through the beads symbolizes the penetrating power of all of the Buddhas. 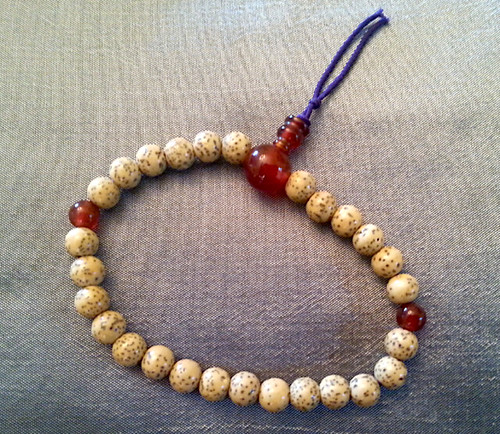 Traditionally, Buddhist rosaries have 108 beads, representing the number of earthly passions and desires that blind and delude us, entrapping us in the cycle of suffering and reincarnation, or samsara. The number also represents the 108 forms that the bodhisattva Avalokiteshvara is able to assume in order to help devotees. It is also said that this number was chosen to enable worshippers to repeat the sacred name of the Buddha 100 times, the extra beads allowing for any omissions made through absent-mindedness in counting or for the loss or breakage of beads. 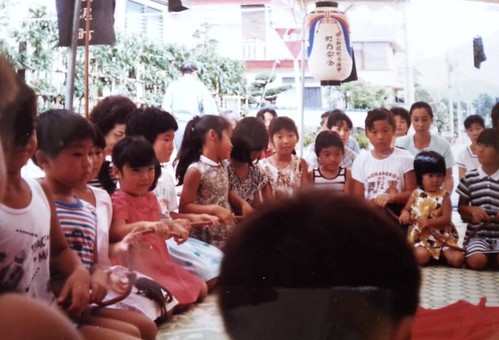 Children in Kyoto pass around a long string of wooden Buddhist prayer beads.
Photo by the author

In the smaller rosaries, the number of beads is generally divisible by three, for example 21, 42, or 54 beads. Many Chinese rosaries, or shu zhu, have only 18 beads, one for each of the 18 Buddhist holy men, known as arhat in Sanskrit and luohan in Chinese. Sometimes very long rosaries are used in special rituals held in honor of particular deities. For example, every summer in Kyoto (and in some other areas of Japan), children participate in a ceremony to honor the bodhisattva Jizo (Sanskrit: Kshitigarbha), a guardian of children in Japanese Buddhist belief. The children sit in a circle and pass round a long string of prayer beads, known in Japanese as juzu, while priests chant prayers to the deity. By touching and passing along the beads (Japanese: juzu-kuri), the children symbolically receive the blessing and protection of Jizo.

The beads are often made of wood, such as sandalwood or sacred wood from the Bodhi tree (Ficus religiosa), under which the Buddha attained enlightenment. Precious or semi-precious stones can also be used, including pearls, rubies, amber, coral, or jade, as well as gold and other precious metals. In Tibetan Buddhist practice, although malas made of wood or seeds from the Bodhi tree can be used for any type of mantra, certain mantras require specific beads related to their purpose. For pacifying mantras, clear beads such as shell or crystal are used since they are believed to help purify the mind and clear away obstacles such as illness, bad karma, and mental disturbances. However, very powerful mantras used for taming by forceful means and for subduing harmful energies, require great skill, compassion, and call for a string of 108 beads made from rudraksha seeds from Elaeocarpus trees (mainly Elaeocarpus ganitrus), or even human bones. 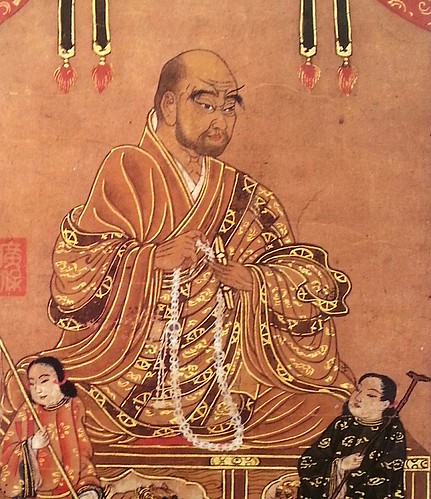 As key implements in Buddhist rituals and practice, beads are often represented in devotional images of deities and priests or Buddhist patriarchs. In the above image, the 10th century Japanese priest Ryogen, or Ganzan Daishi, is portrayed seated on a platform wearing elaborate silk brocade robes and fingering a string of crystal beads, suggesting that he is the middle of an incantation or prayer. While the raised, gilded platform and expensive robes allude to his important position in the Tendai lineage of Japanese Buddhism, the string of beads is a reminder of his powerful spiritual practice and his devotion to his faith.

Rosaries are also attributes of certain deities. The compassionate Buddha Amitabha is sometimes depicted holding a rosary, but it is the bodhisattva Avalokiteshvara who most often holds prayer beads. In many paintings and sculptures, he is shown holding a lotus, a water sprinkler, and a rosary of 108 beads, representing his vow to help believers conquer the 108 passions and attain enlightenment, and the 108 forms he can assume to this end. In one of his esoteric forms, Cintamanichakra Avalokiteshvara (Avalokiteshvara of the Jewel and the Wheel), the deity has six arms, each representing a vow to save beings in one of the six realms of rebirth and holding a symbolic attribute; the hand holding a string of prayer beads represents the realm of beasts. 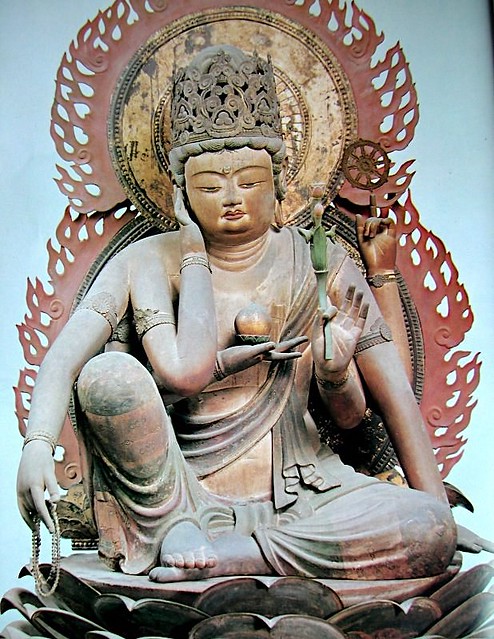 As with the prayer beads of many spiritual traditions worldwide, mala are among the most beautifully crafted objects used by Buddhist practitioners. They are also among the most intimate tools used in the spiritual practice of millions of Buddhists. Held in the hand and fondled with love and devotion by priest and lay practitioner alike, these strings of beads assist in one of the most challenging aspects of Buddhist practice—focusing the mind and reining it in during the chanting of prayers, mantras, and names of deities. By grasping the beads and accepting their guidance, the practitioner edges forward during every prayer and every practice on the long journey toward enlightenment.