The Bodhi Group: Singing in Praise of the Buddha Music plays an integral role in the various traditions of Buddhism that exist in different parts of the world today. In Chinese Buddhism, scriptures and devotional passages are often sung, accompanied by musical instruments (or Dharma instruments [法器]) such as the wooden fish (木魚) and singing bowl (磬), to praise the virtues of the Buddha or as a form of personal cultivation. Taiwanese ethnomusicologist Pi-yen Chen notes that there are three distinct types of Buddhist music in present-day Chinese Buddhism, namely, Buddhist chants (梵唄), Buddhist devotional songs (佛教歌曲), and commercial Buddhist music (商品佛教音樂). (Chen 2005) While Buddhist chants have received attention from a number of scholars over the years, Buddhist devotional music is still largely unexplored. 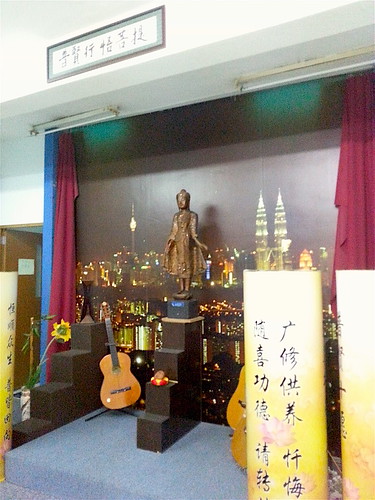 The Buddha in a global city—the theme of the Bodhi Group’s
shrine. Notice the interesting juxtaposition of a guitar and a
wooden fish. Photo by Jack Meng-Tat Chia

We spoke with Brother Wong Choon Tat (黃俊達), one of the group’s leaders, who has been with the organization since 1990. Having served as the vice-chairman and advisory board member of the Young Buddhist Association of Malaysia, Brother Wong is an experienced teacher and lay leader of the Malaysian Buddhist community. He shared with us why contemporary Buddhist songs can be used as a “skillful means” to share the Dharma with Buddhist youths. “Many young people find Buddhist teachings very complex and consider chanting Buddhist scriptures an activity for old folks,” he said with a grin. “Therefore, the Bodhi Group aims to produce and perform cool Buddhist songs to market the image of Buddhism and attract young people to learn the Dharma.”

In fact, the activities of the Bodhi Group sometimes more closely resemble those of a church than a Buddhist temple. The weekly Friday service, known as An Appointment with Bodhi (菩提之約), usually begins with the singing of Buddhist “praise and worship” songs, followed by a Dharma talk, a scripture discussion, or a video screening for the congregation, which is mostly comprised of college students and young working adults. The Bodhi Group runs a number of other programs, such as regular Buddhist music practice and a Dharma propagation course.

The Bodhi Group has also collaborated with their spiritual advisor Venerable Chuanwen (傳聞法師) to organize a number of Buddhist music concerts since 1999. The first concert series, titled “Praise the Tathagatas” (稱讚如來), was based on the vows of the bodhisattva Samantabhadra. The performances and songs were very well received and the Bodhi Group released albums of their original songs. After a six-year hiatus, a second concert series called “Action” (動) was launched in 2014. The second installment of Action was held in 2016, with a recent encore concert in January 2017. In their recent concerts, the Bodhi Group has incorporated electronic dance music into some of their performances. Brother Wong shared with us that the concerts serve as an important platform for reaching out to young people who may be interested in becoming Buddhists, and also help fundraise for the Bodhi Group.

In 2014, a group of Buddhist musicians from the Bodhi Group formed Plan B, a Buddhist rock band. The “B” signifies Buddha and Bodhi. The band, which consists of two guitarists, two bassists, a drummer, a lead singer, and a music arranger, seeks to make Buddhist music “contemporary, popular, and viral.” One of their songs, Verses of Praise to the Buddha (讚佛偈), was released in May 2016 for the Vesak celebration and quickly went viral on Facebook, receiving thousands of views within weeks.

The Bodhi Group illustrates how contemporary Buddhist music can be used as an effective instrument to bring young people to Buddhism. As we drew our interview to a close, we asked Brother Wong how he foresees the future of Buddhist music. “Buddhist songs are likely to resemble more and more those of contemporary pop music,” he told us. “We need to reshape the image of Buddhism for the modern world, but the core of the Dharma remains the same.”