The Buddha at Sea: Atlas of Maritime Buddhism and New Experiences in Museology Atlas of Maritime Buddhism is an exhibition at City University of Hong Kong’s Indra and Harry Banga Gallery, running from 7 July–31 October, which points the way to the future of the museum experience for those interested in world history and Buddhist heritage. Many countries feature along this southern maritime Silk Route, including China, India, Indonesia, Myanmar, Sri Lanka, and Thailand. It is an adaptation of the permanent exhibition conceived and directed for the Fo Guang Shan Museum in Taiwan, which opened on 16 May.

Atlas of Maritime Buddhism is a visually attractive and finely presented exhibition, curating a historically sound and inspiring narrative about the “Great Circle” of Buddhism’s spread around Asia in the early centuries of its development, and is supplemented by new media art. Prof. Jeffrey Shaw, Yeung Kin Man Chair Professor of Media Art at City University, is one of the chief curators alongside Prof. Sarah Kenderdine, Professor of Digital Museology at the École polytechnique fédérale de Lausanne. Ven. Ru Chang of Fo Guang Shan and Dr. Marnie Feneley are the other co-curators, with Dr. Isabelle Frank the associate curator. 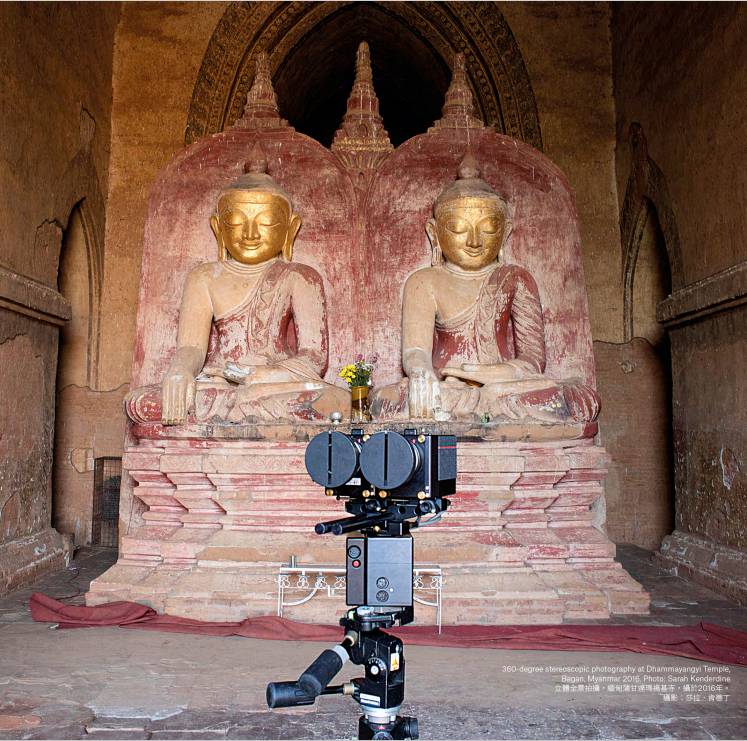 Both Shaw and Kenderdine have worked together on new media art and museology over many years. In partnership with Prof. Lewis Lancaster, a veteran of Buddhist studies and Silk Road studies and professor emeritus at UC Berkeley, the curators focus on the Atlas as a panoramic, 1:1 immersion. The project is ongoing, as COVID-19 disrupted fieldwork in China and prevented the team from working on sites in Japan, Korea, Laos, and Vietnam. Hopefully, the sites from these countries will be added to the Taiwan exhibition. Along with many other new media art innovations, Prof. Shaw pioneered the development and use of the linear navigator, which these days is seen in many museum and exhibition interiors. It is made up of a rail, along which demarcations of space or time are made—such as locations or historical dates. Mounted on the rail is a mobile LED/LCD with a handle that the visitor can drag back and forth. The one featured in this particular exhibition is eight meters long, with the demarcations being locations such as India, Indonesia, Myanmar, Sri Lanka, and Thailand. There are more than 90 panoramic images of sites in these countries. What is unique about this exhibition, Prof. Shaw says, are the pioneering technologies that will contribute greatly to digitization and archival work: “The selection of the Buddhist sites was done by Lewis Lancaster, based on their antiquity, proximity to the early period of the Great Circle, and significance to the maritime Silk Route.”

One of my favourite exhibits at City University was the iDome hemispherical projection. Taken with a 360-degree camera at various sites, this feature projects spherical photographs of Buddhist locales along the exhibition walls. One iDome features one of the Ajanta Caves, which is displayed at a 1:1 scale through a vertical hemispherical projection screen. Other iDome projects recorded Buddhist rituals and ceremonies in China, India, Taiwan, and Thailand, such as the annual ceremony of the Kitchen God Returns to Heaven, the Lunar New Year Light Offering Ceremony, and Morning Meditation. Locales like the Ajanta Caves are significant to the story of the Maritime Silk Route, because harbors and communities where Buddhist monks accompanied seabound merchants and sailors to would have ended up sailing along rivers inland as well as by sea ports—such as the Waghur River for the Ajanta Caves specifically.

It is difficult to do justice to the rich content and stunning visual imagery offered by the exhibition catalogue, which acts as the perfect supplement. It explains not only the background and process of realizing the exhibition, but also offers essays: “Narratives of Maritime Buddhism,” “The Atlas of Maritime Buddhism Research Project” (Sarah Kenderdine), “Buddhist Cultural Exchange” (Marnie Fenley), and “Buddhist Artworks” (Marnie Fenley). The catalogue explains in engrossing detail the ambition and immersion of new media art (40–46). Sarah Kenderdine’s detailed explanation is worth quoting in full:

A key element of the Atlas is the panoramic immersion through which the visitors navigate and inhabit many of the different locations of the dataset. In digital heritage, panoramic immersion has typically been used for two kinds of display: either to produce a digital reconstruction of vanished sites, generated from archeological and historical data, or to travel virtually through real-world remote or inaccessible locations, such as the landscapes in this exhibition. Such adventures of historical and experiential imagination also have their origins in the French nineteenth century, when the poet Charles Baudelaire famously wrote about the new idling urban wanderer, the flâneur—the archetype of the itinerant spectator in a cinematic age.

Today, panoramic environments are the ideal form for the digital flaneur. . . . According to archaeologist Christopher Tilley, the way that humans perceive and interpret pictorial landscapes is inherently tied to the act of walking in real life. For Tilley, walking has three aspects: it involves physical contact with the material world; it has a temporal component; and it is used to gather views, impressions and knowledge of the place, producing a virtual compendium.

The Atlas of Maritime Buddhism revives this primal, kinaesthetic experience for the spectator by surrounding them in an immersive 3D, 360-degree visualization system. In this space, the viewer can freely, physically navigate within the panoramic visual projection. They can also negotiate and map any virtual terrain with their bodies, either by looking or moving about in the open spaces of the panoramic projection room or by virtually travelling in the 3D reconstructed world using an interactive interface. . . . It is a place that calls for active responses and the interactive performance of the viewer. (44–46) As with Prof. Shaw’s accomplishment with the Dunhuang Academy in 2012 through the exhibition Pure Land AR and other projects, many items and sites of historical, cultural, and religious significance are undergoing the same strategy when it comes to museology. Digital mapping, 3D photogrammetry, and archiving for posterity mean that high-quality software replicas of sites, items, and scenes can be displayed to the public at a thematic exhibition or gallery. “I see my work with Dunhuang as a model that can hopefully set precedents for trends in museology. It is not just about putting high-tech screens in museums. There is a need to attend to interactivity in the museum experience,” said Prof. Shaw”

Museums ultimately wish to attract visitors hoping to view and learn new things, and the social dimension is seen in not just groups of visiting viewers of galleries, but also the “dialogue” between the curators and the visitors who absorb the gallery’s content. The content for this particular exhibition has been five years in the making, spanning much of Asia across diverse Buddhist sites, and captured with cutting-edge new media art technology. Atlas of Maritime Buddhism—whether in reference to the exhibition in Hong Kong or its permanent Fo Guang Shan counterpart—will not only bring attention to the important technology that is reshaping our museum experience for the better, but also assist in popularizing emerging, historically-informed narratives about the littoral role in Buddhism’s diffusion.