The Contemporary Newar Art Movement of the Kathmandu Valley Gathering of Newar painters in honor of Prem Man Chitrakar, seated at center. Image courtesy of the author

“No other people on earth, Watson, has produced such intricate beauty in as small a space as the Valley of Katmandu. One trenchant observer has described it best as a kind of coral reef, built up laboriously over the centuries by unrecorded artisans. As a human achievement, it ranks with the creations of Persia and Italy.”

“Good Lord, Holmes, and to think that no one even knows of its existence!” (Riccardi 2003)

This exchange between the fictional detective Sherlock Holmes and his companion Dr. Watson poignantly describes the predicament of these unrecorded artisans, who only now are truly gaining recognition. These people are the Newars, the original inhabitants of Nepal’s Kathmandu Valley, who created this unique historical heritage with its hybrid Hindu-Buddhist culture. Yet it was from this tiny Himalayan kingdom that much of what is now recognized as “early Tibetan art” first arose, since the Newars were the direct inheritors of the artistic and architectural traditions of the late Pala-Sena dynasties of eastern India, which were destroyed at the end of the 12th century by the iconoclastic armies of Islam. 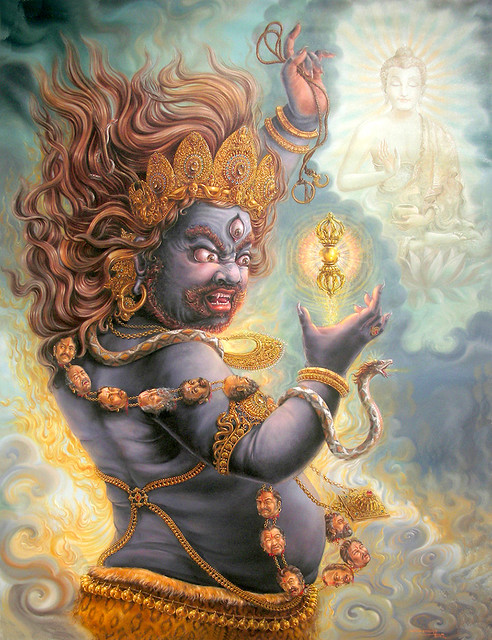 Between the 8th and 12th centuries, the transmission of Indian Tantric Buddhism flowed into western Tibet through Kashmir, and into central Tibet through the Kathmandu Valley. And from the valley’s three royal cities of Kathmandu, Patan, and Bhaktapur, respectively, came the finest Newar painters, statue-makers, and wood-carvers, whose enduring influence on Tibetan art was enormous. This early Indo-Newar style of painting is known as the Beri (Tib. bal-ris) style, which endured as the dominant form of Tibetan art until the late 16th century. The most famous Newar artist of the Beri period was Arniko or Anige (1245–1306), who in 1273 was appointed “supervisor of all artisans” by Kublai Khan, the great Mongol emperor of China’s Yuan dynasty. Left to right, Raj Prakash with Samundra Man, and the author. Image courtesy of the author

The Newar equivalent of the Tibetan thangka is known as a paubha, and the artists who painted or sculpted these images mainly belonged to the Chitrakar or Buddhist Vajracharya and Shakya castes. However, as Tibet later developed its own schools of painting, and with an ever-increasing influence of Hinduism, the Newar paubha painting traditions have remained somewhat static over the last few centuries. This was also due to Nepal and Tibet both choosing to remain isolated from the outside world, with Nepal only opening its doors to foreigners after the Chinese invaded Tibet, and following the “conquest of Everest” by a British-led expedition in 1953. Early photograph of Anandamuni’s Padmapani Lokeshvara on the Half-shell, painted c. 1940. Image courtesy of the author Early photograph of Anandamuni’s Mahakala on the Half-shell, painted c. 1940. Image courtesy of the author

The late 1960s saw the first influx of Western spiritual seekers, who braved the overland “hippy trail” that terminated in the then-tranquil Shangri-La of the Kathmandu Valley. From this time on, a tourist market of statues, thangkas, and wood-block prints of Buddhist and Hindu deities began to emerge, most being poor imitations of authentic originals that are produced locally under sweatshop conditions. The copyists who still replicate these images are mainly Buddhists of Tamang ethnicity, many thousands of whom are now employed to produce thangkas for the tourist market and Vajrayana Buddhist practitioners. By contrast, the community of Newar paubha painters is still relatively small, numbering around a hundred. Yet the innate skills of many of these artists are phenomenal, and only now are they gaining the recognition they deserve. As a practicing thangka painter, I was profoundly inspired by the legendary Newar artist Siddhimuni Shakya (1932­–2001), whom I first met in 1973. Siddhimuni’s father, Anandamuni Shakya (1903–44), was a true genius of the modern Newar art renaissance, introducing lifelike three-dimensional paintings of Hindu and Buddhist deities with a meticulous chiaroscuro effect that resembles early black-and-white photography. A few of these deity compositions were derived from Sandro Botticelli’s work, such as Anandamuni’s sepia portrait of Padmapani Lokeshvara on the half-shell.

Another famous paubha painter working at this time was the late Manik Man Chitrakar, whose son, Prem Man, went on to teach many young artists. Among these were Samundra Man Shrestha and Raj Prakash Tuladhar, whose works are now highly sought after by collectors, especially in China, where they now even adorn mobile phone cases. 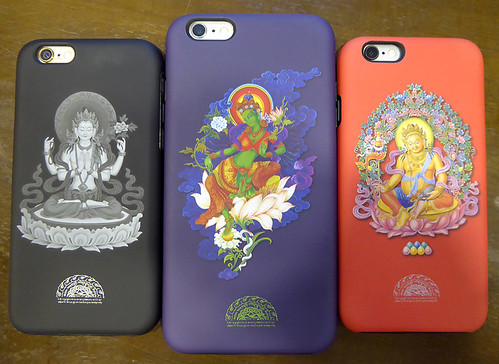 Mobile phone covers, with Green Tara by Raj Prakash Tuladhar, center, the most
popular design in China. Image courtesy of the author

The contemporary renaissance in paubha painting is essentially characterized by lifelike three-dimensional depictions of Buddhist and Hindu deities, which are equally venerated within the complex pantheon of the Newar tradition. Peaceful gods and goddesses sit or stand in graceful dance postures amid heavenly landscapes, their exquisite faces radiating blissful tranquility, their intricate jewelry shining with reflected light. In contrast, wrathful deities emerge from blazing maelstroms of fire and smoke, their dynamic forms endowed with tremendous energy, their disheveled hair and charnel ground ornaments swirling wildly, their distorted faces and bloodshot eyes moist with liquidity. Udaya Charan Shrestha finishing a paubha of Sarasvati. Image courtesy of the author

Compared with the relatively flat, two-dimensional stylized forms commonly portrayed in classical Tibetan thangka painting, the finest examples of modern Newar art are often vividly three-dimensional and hyper-real. In the past, this has led some hardline traditionalists to dismiss them as “eye candy.” Yet to the uninitiated they invariably appear as exquisite works of art, as authentic as any masterpiece from any great cultural renaissance. And while traditional Tibetan art is mainly doctrinal and meditative in content, contemporary Newar painting is essentially devotional and inspirational. Its imagery speaks to the heart of the “outsider,” awakening that spark of spiritual yearning within. The Newars have their own unique pantheon of deities with their rituals, masked dances, and textual sources, and the iconographic research undertaken by a great Newar artist such as Udaya Charan Shrestha—whose original compositions have been widely copied—would certainly have impressed Sherlock Holmes. Detail of the tantric goddess Rudrani by Udaya Charan Shrestha. Image courtesy of the author Facial detail of the goddess Annapurna by Udaya Charan Shrestha. Image courtesy of the author

I never tire of appreciating these modern masterpieces of Newar art, and am honored to know most of the artists as true friends. Twenty years ago, they largely lived in anonymity, their work rarely appearing in any of Kathmandu’s commercial thangka shops. It took years for them to gain recognition, and now some of them have become megastars. In 2016, a solo exhibition of Samundra Man Singh Shrestha’s work at the Nepal Art Council Gallery attracted many thousands of visitors and much media coverage. Yet when I was in this same building for the annual paubha exhibition in 2000, no one else was there and no work was sold. Fortunately, circumstances have since progressed, and I have no doubt will continue to do so, for the works of these modern “renaissance artists” of Nepal are truly inspiring and saturated with spiritual meaning. They speak to the heart of that which remains holy, pure, and of beauty in our ever-changing times, and as such are certainly deserving of our attention. The author with Udaya Charan Shrestha. Image courtesy of the author