The Dogma of the Buddhist Master’s Infallibility: A Reappraisal of “Buddhist Modernism”

Buddhism is often presented in the West as a rational, individualistic, and democratic “spirituality,” as opposed to a dogmatic, hierarchical, and superstitious religion. Even scholars consider its modern incarnations to be the results of a transformation process characterized by rationalistic trends, such as demythologization, democratization, and psychologization. (Bechert 1966 and 1988, Lopez 1998, McMahan 2008)

Although this is true on a discursive level—most Buddhist teachers in the West insist that their tradition is “adapted to the modern world,” or even to science—my field research suggests quite the opposite is true in practice; the actual practices offered to Westerners are not devoid of devotional, ritualistic, hierarchical, and mythological dimensions. Based on two examples, the Tibetan teachers Chögyam Trungpa (1939–87) and Sogyal Rinpoche (b. 1947), we shall explore how, in the context of a supposedly “modernized” and “psychologized” Dharma, Westerners are often led to believe that the Buddhist teacher is always right in whatever he does. Chögyam Trungpa Rinpoche and Sogyal Rinpoche are both internationally acclaimed teachers and the authors of bestselling books. They are often considered Buddhist modernizers because they have developed approaches to Tibetan Buddhism that they identify as both traditional and modern; that is to say both authentically Tibetan and adapted to contemporary Western culture. But beyond this imprecise claim, in what objective sense were they truly Buddhist modernizers?

Trungpa Rinpoche and Sogyal Rinpoche both broke with their lineages. Trungpa Rinpoche was a defrocked monk (as attested by several of his Western followers) who, as a teenager, had a relationship with a nun that resulted in a child, Sakyong Mipham, now the the head of the Shambhala Buddhist lineage and Shambhala International. Trungpa Rinpoche left Tibet for India in 1959, and was invited by Oxford University to study comparative religion in 1963. While in Britain, he abandoned his Buddhist vows, dressed in Western fashions, and married 16-year-old English aristocrat Diana Judith Pybus. Outside of his marriage, Trungpa Rinpoche reportedly had affairs with other young women, arguing that it was a means for helping them to attain enlightenment. (Mukpo 2006)

Sogyal Rinpoche left Tibet at around the same time and, according to his official biography, was invited to study comparative religion at Cambridge University. His first followers, however, state that he came to England in the 1960s to receive treatment for tuberculosis. (Finnigan 1995) Coming from a wealthy, aristocratic family, Sogyal Rinpoche could afford high-quality medical treatment abroad. It is only later, after being asked to teach by the young people he encountered, that he decided to establish himself as a teacher. At first he first served as Dudjom Rinpoche’s assistant and interpreter, but later broke with him as he wanted, according to some of his close followers, the freedom and leisure of a Western lifestyle. Sogyal Rinpoche founded a new school catering to Westerners, which he named Rigpa (“the innermost nature of the mind”).

Unlike Trungpa Rinpoche, Sogyal Rinpoche was not a monk and his teachings did not follow any traditional curriculum. Instead, Sogyal worked with his closest students to create a whole new corpus of doctrines and practices, drawing on different sources—mainly Tibetan, but also Zen, Theravada, psychotherapy, scientific vulgarization, and others. (Dapsance 2016) Rigpa became a very prosperous enterprise following the success of the book The Tibetan Book of Living and Dying, which he authored in 1992 with students Andrew Harvey and Patrick Gaffney. The Rigpa school now has approximately 130 Dharma centers in more than 30 countries. Trungpa Rinpoche’s organization, Shambhala International, is still active today, but specializes in a more secular approach to meditation developed by Trungpa Rinpoche and his students, based on what he calls “Shambhala Vision,” which sees enlightened society as realizable by people of all faiths through the practices of mindfulness, non-aggression, and a sacred outlook. Trungpa’s books are still considered classics among Western Buddhists.

Trungpa Rinpoche and Sogyal Rinpoche can thus be considered “modernizers” because they created a new Western-Tibetan Buddhist movement, partially disconnected from their traditional lineages, focusing on the production and sale of books.

They can also be viewed as modernizers because the teachings they developed are a reiteration of beliefs developed by the founders of the Theosophical Society at the end of the 19th century (Lopez 1998, Dapsance 2016). This worldview can be summarized as follows: the West is undergoing a spiritual crisis because it has developed a purely materialist science and has separated the original Truth into various religions, but it can regain its soul and unity by learning from the wisdom of the East.

Because this model of “spirituality” directly opposed Christianity (the Theosophists’ native religion), everything in Buddhism that could resemble the Christian religion (ritual, devotion, faith, myth) was reinterpreted as mere psychotherapeutic exercises, or as even as pure metaphor. For example, the six Buddhist realms of existence (heavenly, demi-god, human, animal, ghost, hellish) were reinterpreted as mere “states of mind.” (Trungpa 1992)

The transformation of complex religious doctrines into simplistic lessons for stressed out Westerners could be described as “modernization,” or as the “Westernization” of Tibetan Buddhism, if the lamas had not added a series of practical innovations, the consequences of which are more than ambiguous. Indeed, Trungpa Rinpoche and Sogyal Rinpoche consider their enlightening method to be teaching how to “break concepts.” Because of their “original sin” of materialism, Westerners cannot see the world properly; they have too many misconceptions. (Dapsance 2016)

To remedy this misfortune, Trungpa Rinpoche invented a new concept that he called “crazy wisdom,” derived from the Tibetan expression yeshe chölwa. Indian and Tibetan mythological tantric “holy fools” were known for their eccentric behavior, their magical powers (such as flying through the air), and their ability to accept all things equally (to copulate with beautiful princesses as well as with ugly old women, and to drink divine nectar or urine with the same indifference). Trungpa Rinpoche, however, had a marked preference for pretty young women, luxury, alcohol and other drugs, and good food, and did not manifest any psychic powers. Trungpa Rinpoche’s interpretation of “crazy wisdom” was behaving in such a way that he would shock his audience to shatter their preconceptions. He often arrived at his own teachings several hours late and drunk, had multiple sexual relationships, and obliged his disciples to undress during certain “Vajra parties,” which were particularly violent. He regularly humiliated his students in public, expected them to work for free to build his organization, demanded the establishment of a royal court in the British style (with housemaids, valets, and butlers), as well as the creation of a militia of “Shambhala warriors.” (Sanders 1977 and 1979, Clark 1980, Butterfield 1994, Mukpo 2008)

Another of Trungpa Rinpoche’s contributions to modernizing Buddhism was to reinvent and actualize the myth of Shambhala, the messianic kingdom described in the tantric Kalachakra text, and introduced in Tibet in the 11th century. Trungpa wanted to create a new, “enlightened” society of which he would be the leader.

Sogyal Rinpoche, who now teaches worldwide and was a declared admirer of Trungpa Rinpoche, has also adopted the “crazy wisdom” principle. Students enroll in his Dharma centers to learn meditation, but they quickly discover an initiatory journey characterized by disturbing events meant to test the students’ faith in their master’s compassion. As they become involved in Rigpa, students are encouraged to move closer to him physically, not only as a teacher but, more importantly, as a source of salvation. Indeed, being close to the master is understood as “a quick way to enlightenment,” or the most efficient “spiritual technique.” (Dapsance 2016)

The spiritual journey at Rigpa is divided into several steps resulting in participation in the daily routine of the organization or in the master’s private inner circle. Students learn to “serve Rinpoche” and to “serve Rigpa” as a way to attain enlightenment and help sentient beings. Such tasks include cleaning, tidying, shopping, cooking, accounting, selling books and CDs, typing and translating teachings, answering the phone, reserving hotel rooms and plane tickets, driving, offering massages, and sexual services. (Dapsance 2016)

To an outsider, this can give the impression of servants to a tyrannical master. What they do in reality, according to Sogyal Rinpoche and his assistants, is “serve their inner master.” How are we to interpret these practices? Is this the traditional way to revere lamas, or is it a new, therapeutic technique to cure sick Western egos? My opinion is that it is neither; it is a brand new, hybrid conception of the Dharma. 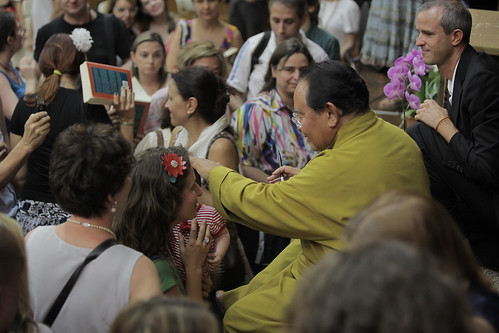 What is, in fact, undeniably “modern” in the case of both teachers, is that they make extensive use of the marketing tools offered by industrialized societies: they publish books that cater to the public’s needs and interests, they talk about peace of mind and self-improvement, and reinterpret the Dharma in psychological terms. Their communications strategies are unmistakably modern. But is the use of “crazy wisdom” as a traditional upaya—a teaching method specifically adapted to the target audience—or the authoritative constraint, allowing for the creation of an entirely new Western dogma, according to which the Buddhist teacher is always right no matter what he does? This question remains open.

Sanders, Ed. 1977. The Party: A Chronological Perspective on a Confrontation at a Buddhist Seminary. Woodstock: Poetry, Crime, and Culture Press.

Sanders, Ed. “Behind the Veil of Boulder Buddhism, When the Party’s over.” Boulder Monthly, March 1979.