The Guimet Museum in Paris: A Legacy of Asian Art in France The Guimet. Photo by BD Dipananda

For hundreds of years, Paris has been a major center for finance, fashion, science, and the arts. The city is home to a multitude of historical and religious landmarks, among them the Eiffel Tower, the Notre-Dame de Paris (perhaps the largest and most well-known church building in the world), and the Sainte-Chapelle, a royal chapel in the Gothic style. Paris is also famously home to numerous beautiful museums, including the Louvre, the world’s largest art museum and one of the most visited. The Musée d'Orsay and Musée de l'Orangerie are noted for their collections of French impressionist art, which add to the city’s artistic appeal. The harmonious architectural vista of the buildings dominating the heart of the city houses a rich diversity of religious practices and spiritual traditions.

In August, my friend Ven. Dr. Amrita Nanda and I paid a short visit to the Guimet Museum (Musée national des arts asiatiques Guimet), which has one of the largest collections of Asian art in the world. The Guimet was an unfamiliar name to us until a friend living in Paris strongly recommended that we go. It is, in our friend’s words, an essential stop for the study of religious sculptures. There are objects from different religions and collections of antiquities from various periods of Chinese, Indian, Japanese, and Korean history. It is no surprise, therefore, that the Guimet is known as a national museum for Asian art in France.

I was astonished when to find a replica of one of the Buddhas of Bamiyan, a monumental statue of a standing Buddha dynamited in March 2001 by the Taliban in Afghanistan. It is the central attraction at the main entrance of the museum. Ven. Amrita Nanda and I had a conversation with a security guard who took us to the top floor, where a replica of the head of another Bamiyan Buddha rests. The head’s size was awe-inspiring. As we were coming down, I remarked to our well-wishers that the museum had been one of my favorite sites in Paris. I felt the statues of the Buddha were being cared for with such devotion and expertise that visitors like me could not help feeling peace of mind, despite the fact that they were technically being housed in a foreign land. Located within the metropolitan area at 6 Place d’lena in the 16th arrondissement (administrative district), across the river from the Eiffel Tower and a few steps from the Iéna Métro station, the Guimet Museum is home to thousands of sacred artifacts. It was founded in Lyon in 1879 by Emile Etienne Guimet, a French industrialist, traveler, and art lover. In 1885, Guimet handed this museum over to the state, which transferred the collections to Paris. Because Guimet was a traveler, he was commissioned by the minster of public instruction in 1887 to study the religions of Asia. The museum contains many items he acquired during his travels. Of course, accumulating such treasures back then with little thought given to the consequences was common.

Many of the later artifacts in the museum were collected from Asia by colonial French authorities. From December 2006 to April 2007, the museum hosted collections from the National Museum of Afghanistan in Kabul, with archaeological objects from the Greco-Bactrian city of Ai-Khanoum (once called the Alexandria on the Oxus), and the Indo-Scythian wealth of Tillya tepe, an archaeological site in the northern Afghanistan province of Jowzjan. Amid a substantial reorganization of the French national collections, a decision to focus exclusively on Asian art was made in 1945. The Guimet transferred its Egyptian pieces to the Louvre, and in return received the entire collection of objects from the latter’s Department of Asian Art. Between then and 1953, it became one of the world’s leading museums for Asian art. The Guimet consists of sections such as Afghanistan-Pakistan, Arts of the Himalayas, Southeast Asia, Central Asia, China, India, Japan, Korea, Library Collections, and photographic archives.

The photograpic archives consist of one of the finest collections of Eurasian art and archaeology. They include albums from India, Turkey, Siberia, and countries in East Asia, the Middle East,  and Southeast Asia. The Chinese album is remarkable, with photographs from the French archaeological missions led by Edouard Chavannes (1865–1918), Victor Segalen (1878–1919), and Paul Pelliot (1878–1945).

Although the Guimet hosts the largest collection of Asian art in France, little is known about the origins of many exhibits—such as the names of the temples or sanctuaries from which they were taken. According to assistant professor Ting Chang of the University of Nottingham in England, except for the occasional document found inside sculptures, “No information exists on how most of these objects found their way into the French collector’s hands.” There is more information on artifacts brought from Japan: “Guimet acquired in Japan over 300 religious paintings, 600 statues, and over a thousand books and manuscripts in nine weeks.” (Chang 2016, 78). The present Japanese collections include some 11,000 objects that date from the 3rd century BCE to the beginning of the Meiji era in 1868. 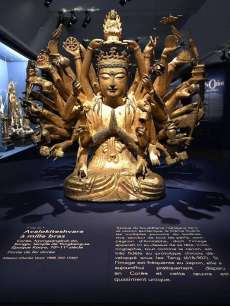 Chang writes that upon returning to his home in Lyon after his trip, Guimet formed three bodies for his collection: a museum of world religions, a library of Sanskrit, Tamil, Sinhalese, Chinese, Japanese, and European materials on the subject, and a school for East Asian languages. To run these institutes, he sought help from five Buddhist groups in Japan, two Indian Buddhist schools, one Confucian academy, and several Shinto groups. It is said Guimet founded this museum as a resource for the comparative study of non-Western religions. As a business owner and manager, Guimet said he had a “commitment to the physical and spiritual well-being of his factory workers, boldly claiming for himself such predecessors as Lao Tze, Confucius, Sakia, Mouni, Zoroaster, Moses, Plato, Jesus, and Mohammed, who each provided social solutions in their day.” (Chang 2016, 79)

​The Guimet is unique among the many acclaimed museums in the City of Love. I believe these collections truly do justice to the traveler’s adventures in Asia. Despite the ongoing debates and politics surrounding cultural repatriation, all of these Asian antiquities remain well-preserved by their hosts, museums that introduce visitors to Buddhism and the religion’s rich heritage of art and aesthetics.

Who was Alexandra David-Neel? A Brief Story of a Buddhist Anarchist
From the Gobi to the Getty: Buddhist Art from Dunhuang on View in Los Angeles
Shifting Stones, Shaping the Past: Sculpture from the Buddhist Stupas of Andhra Pradesh – Book Review
The Many Forms of Avalokiteshvara
Practicing Perfection in Art, Buddhism, and Life
Reflections on Learning to Paint like a Medieval Thangka Painter: Hand-grinding Gems and Minerals into Pigment