The Heritage of Buddhist Women in Mongolia: A Conversation with Kunze Chimed Conference for Buddhist women at Gandantegchinlen Monastery, 2015. Image courtesy of the author

The cultural heritage of khandmaas (Tib: khandroma, Skt: dakini) and nuns has been passed down from generation to generation through the long history of Mongolia. While female Buddhist practitioners have been largely unknown in Mongolian history, maintaining the secrecy of the Dharma, a new book by Kunze Chimed, Heritage of Buddhist Women, is a unique source on the history of these remarkable women and a great contribution to the growing wealth of literature dedicated to female Buddhist practitioners.

Kunze Chimed is a Mongolian yogini who has dedicated her Dharma work to preserving the ancient traditions of Buddhist women in Mongolia and to the revival of the cultural heritage of nuns and female lay practitioners. She is the director of the Buman Khand (Million Dakinis) association of Buddhist women, a brilliant performer of Tibetan mantras, and an author and translator. Heritage of Buddhist Women is an anthology composed of stories, interviews, and articles about Mongolian nuns and yoginis, and about their temples and practice. 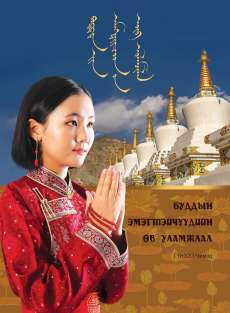 Heritage of Buddhist Women. Image courtesy of the author 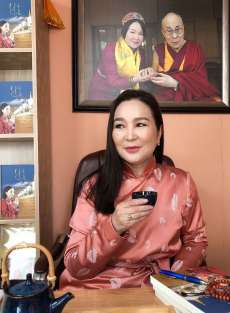 Kunze Chimed with her new book. Image courtesy of the author

The third chapter of the book presents the traditions of the Mongolian khandmaa—female practitioners of profound wisdom and compassion and with extraordinary abilities. The information of this long and unbroken tradition in Mongolia has been limited through the ages, yet with the revival of Buddhism in 1990, this tradition developed along with that of the nuns.

The book was launched on 26 May, the auspicious Saka Dawa Duchen, with an online conference in which I had the honor to participate and discuss the intriguing subject of khandroma and the heritage of Buddhist women. After the conference, Kunze Chimed agreed to speak with Buddhistdoor Global about her book and the life of Mongolian Buddhist women. Online conference during the book launch. Image courtesy of the author

Buddhistdoor Global: Kunze Chimed, can you talk about some of the most inspiring stories in your book?

Kunze Chimed: Many amazing khandromas have lived in Mongolia. The elderly khandromas that I have met have memorized Buddhist teachings, stories, myths, and mantras that were transmitted secretly by monks to their daughters during the revolution,* when they faced very difficult times for practicing the Buddhadharma.

In 1913, five women, led by Zurchiin Tamjav, founded Tantung Chöd Temple, northwest of Baldan Bereeven Monastery and located in Khentii Province. Tamjav Khandmaa of Zurch also taught her only daughter, Tuvaanjav, the Tibetan practice of chöd (Cutting through the Ego) at the monastery she founded. Tuvaanjav received the chöd practice at the age of 13, and at the age of 28, she accumulated Chumig Gyatsa (One Hundred Springs) eight times. By the time she reached 83 years old, she had practiced chöd continuously for 70 years. In her memories Dulamjav Khandmaa, head of Janchiv Dechenling Monastery, mentioned about five sisters who were chöd practitioners during the same period. These stories were very inspiring for me.

As I researched Buddhist women leaders in many countries of the world, I was inspired and motivated to read about the work of the American bhikshuni Venerable Karma Lekshe Tsomo. I feel very proud of Ven. Lekshe Tsomo, who has worked for women’s rights and inspired their spiritual and intellectual activities, not only in Mongolia but around the world. She has made a valuable contribution to women’s development. 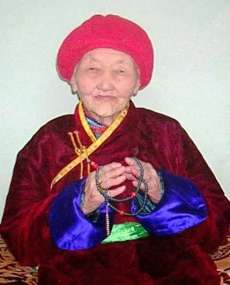 Amaa Khandroma (1905–2010) from Khentii Province. Image courtesy of the author 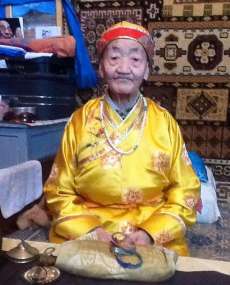 BDG: What has been the most important feature of the Buddhist women you’ve met?

KC: Mongolian Buddhist women follow a long tradition of devoting their lives to accumulating virtue and respecting and honoring their root guru (Tib: tsawei lama). The esoteric Buddhist teachings are based on the Tantric tradition and traditionally the lama’s instructions were kept secret.

Most of the women that I met during my research are committed to the Buddhist path with loyalty, morality, and kindness. They are dedicated to valuable activities such as preserving the spiritual tradition, cherishing the priesthood, and protecting nature and the land. BDG: What is your overall conclusion about the lives of Buddhist women in Mongolia?

KC: To cherish, preserve, and develop our cultural heritage is part of Mongolian state policy. Mongolian women follow the tradition of transmitting national heritage and folk customs to their children.

The unique feature of Mongolian Buddhist women is that they combine their devotion to the Three Jewels with their duty as mothers. They dedicate their time to the care and proper upbringing of their children by applying the compassionate teachings of the Buddha. Audience with His Holiness the Dalai Lama in 1994 for the first four nuns to graduate from Jamyang Choling nunnery in Dharamsala, founded by Ven. Karma Lekshe Tsomo (far right). Kunze Chimed stands to the right of His Holiness. Image courtesy of the author

Many Buddhist women all over the world don’t follow the culture of their nations are also unable receive full ordination like monks. Mongolian Buddhist women follow the Vajrayana teachings and practice only the secret Tantric rituals. The unbroken oral tradition of the Mongolian khandmaas is based mainly on various sources of tantra. One of their main practices is chöd, associated with exorcism and taming spirits. Learning the chöd practice, one has to wander in fearful areas and meditate at haunted places, cremation sites, and charnel ground.

Mongolian Buddhist women are making positive contributions to our society and culture, but with the developments of modern society, they need self-improvement and reform. Due to imbalances between the roles of men and women in Mongolian Buddhism, it can be observed that they do not express freely their views on internal religious issues. Therefore, this book offers a number of suggestions for the empowerment of Mongolian women. This concerns their values, their leadership in religious and cultural activities, education of the younger generation, and learning from the examples of women in other Buddhist countries. I hope that my book will be a beneficial resource of Buddhist cultural traditions and of great value to the public.

* The Mongolian Revolution of 1921 was a military and political event in which Mongolian revolutionaries, with the assistance of the Soviet Red Army, expelled the Russian White Guard from the country and founded the Mongolian People's Republic, a unitary sovereign socialist state that existed from 1921–92.