The Lion Hut of Empty Cloud 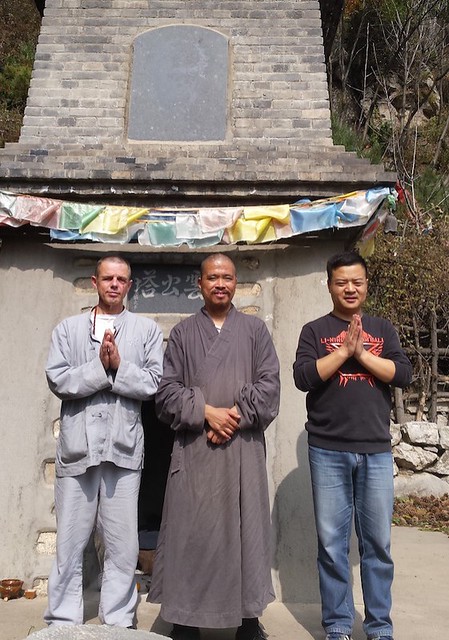 The author, left, in front of Lion Hut Pagoda with Master Wu Xuan, center.
Image courtesy of the author

In October 2013, while on retreat at Zhen Ru Chan Monastery in China’s Jiangxi Province, I met a Chan master named Wu Xuan. He was staying in the room next to mine, and we became good friends. From our conversations, I learned that he lived near the Lion Hut hermitage in the Zhongnan Mountains of Shaanxi Province, so I asked him if he would guide me there one day. My opportunity came two years later when I had the chance to visit Gu Guanyin Chan Monastery near the city of Xi’an, the capital of Shaanxi Province, where Master Wu Xuan is the abbot.

The Lion Hut was built in 1900 by Master Empty Cloud (Xu Yun; 1840–1959), who lived there in seclusion for several years. A renowned Chan master and one of the most influential Buddhist teachers of the 19th and 20th centuries, Master Empty Cloud injected tremendous new energy into the Chan school during his 100 years as a monk. He inspired thousands of disciples in several countries in Asia, including princes, ministers, and the king of Thailand, and towards the end of his life was invited to be an honorary founding president of the Buddhist Association of China, which he declined on the grounds of old age. 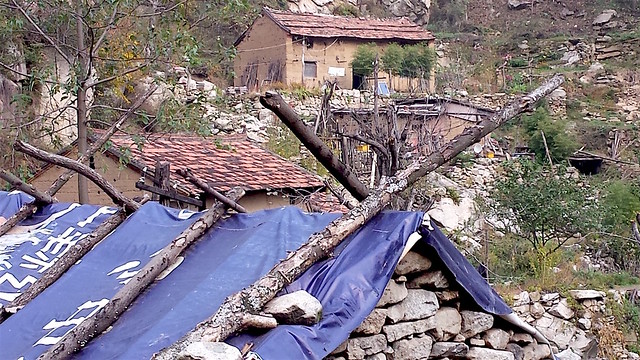 Hermit huts in the the Zhongnan Mountains. Image courtesy of the author

Below is an excerpt about the Lion Hut from Master Empty Cloud’s personally dictated autobiography, recorded at Cloud Gate Chan Monastery in 1952:

Whilst at the Wo Long Monastery in Xi’an, I was invited by General Chen to pray for rain and snow to help end the long drought. Afterwards, the abbot Dong Xia asked me to stay on. However, as there was so much hustle and bustle, I left in secret. Then, in October, I once more climbed the Zhongnan Mountains to build a thatched hut and live in seclusion. There, in the remote stillness, behind the summit of Chai Wu Tai, I found the Lion Cave. It was at this time, to avoid any uninvited visitors, that I changed my Dharma name from De Qing to Xu Yun, or “Empty Cloud.” As there was no water I melted snow, and I ate wild vegetables. At that time, a few other hermit monks were also living on the mountain. On Broken Rock, or Poshi Peak, was Master Benchang. Master Miaoyuan was at Guan Di Temple, and in the Wuhua cave lived Master Dao Ming. Also living separately, in thatched huts on the back of the mountain, were Masters Miaoyuan, Xiuyuan, and Qingshan. Master Blue Mountain, or Qingshan, was from Hunan and was greatly respected by the monks in the Zhongnan Mountains. He lived not so far from me, and we often visited each other. I planted a vegetable garden, with plenty of potatoes.

That winter, Master Blue Mountain asked me to go to Xi’an to buy provisions. On the way back there was a heavy snowfall. Close to his new thatched hut I slipped off the path, falling into deep snow, and shouted for help. Master Yiquan came from a nearby hut with a rope and rescued me. My robes were soaked through and it was now dark, but I thought more heavy snow would block my path and so I pushed on to Master Blue Mountain’s hut. Arriving there, he saw me and laughed teasingly at the state I was in, saying that I was useless. Nodding in agreement, I smiled and hurried back up to the Lion Hut to pass the New Year. 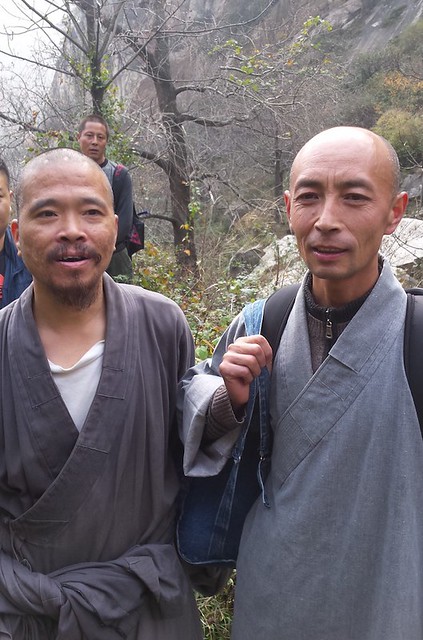 All that spring and summer, I lived in my stone-walled thatched hut alone. My mind and body felt pure and clear. The mountains were all covered with snow, and the severe cold got right into your bones. One day, I was cooking taro in a cauldron. While waiting for it to cook, I sat in the lotus posture, slipping into a deep samadhi [meditative absorption] state; quite unintentionally, I totally forgot all about my surroundings, and there, far above the red dust of the world, I slipped away from the realm of people.

The hermits who lived nearby were surprised I had not been seen for a while, so they came to the Lion Hut to wish me a Happy New Year. When they arrived, they noticed tiger paw prints in the snow. On entering, they saw me sitting in a deep samadhi. By ringing a small bell in my ear they brought me out of my meditation. They asked me if I had eaten, and I replied, “I have not, but the taro should be well cooked by now.” Lifting the lid, we saw half an inch of mold growing on the cold taro. Master Fuchong was very surprised, and said, “You must have been in samadhi for a couple of weeks!” We melted some ice and cooked some more taro, eating until we were all full. Afterwards, we shared a few jokes before parting.

In the following days I received visits from both monks and laymen coming from far and wide, day and night. One night I stole away with just a few provisions on my back, to find some peace and quiet. 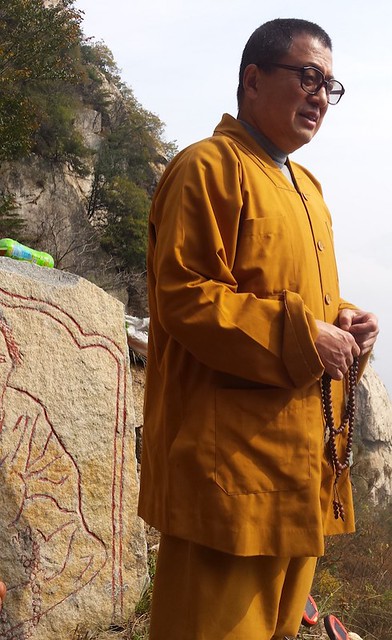 One of the resident monks of the hermitage. Image courtesy of
the author

On the day of my own ascent to the Lion Hut, one of Master Wu Xuan’s students drove us from the monastery to a small mountain village, where we were to continue on foot. Crossing a stream, we started uphill. At first the going was steep, and quickly became an actual climb over boulders. It wasn’t long, however, before we met Master Benxu, one of the resident monks of the hermitage, who was on his way down. We conversed briefly, and I was pleased that he had no trouble understanding my poor Mandarin and that his replies to my questions were also easy to understand.

In my excitement at finally being able to visit this sacred place, I pushed ahead of the others in our group. Once I reached the mountain path, I passed a few hermits’ huts with their adjacent vegetable plots. My arrival intrigued the monks, nuns, and laypeople I encountered, all of whom stopped to ask me where I was going. I paused to refresh myself by sipping water from a mountain stream, but such was my eagerness after having waited so long to come here that I couldn’t allow myself to rest. By the time I reached the Lion Hut after more than two hours of difficult and dangerous climbing, I was sweating profusely.

Upon my arrival, I introduced myself to the other resident monk of the hermitage, whose presence was quite radiant, yet at the same time ordinary and down-to-earth. He expressed no surprise at the sudden appearance of this lone foreigner. I told him that I had first heard of the Lion Hut 40 years earlier, and had long dreamed of visiting. He invited me inside and offered me a seat, then started giving acupuncture to one of two women who were there with a young boy, so I went back outside and sat in meditation at the base of the memorial pagoda until the others arrived. 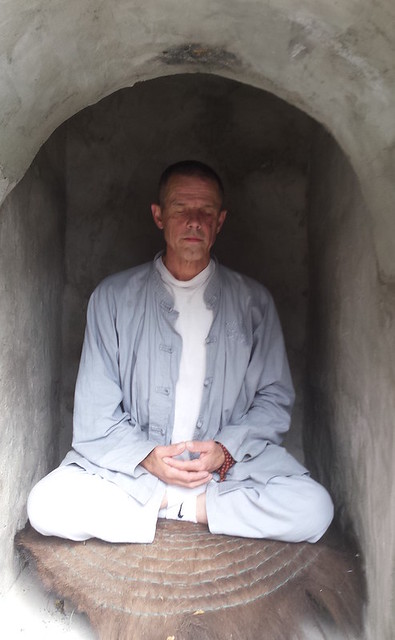 The author sitting in the memorial pagoda. Image courtesy of the
author

We had brought a picnic lunch as well as vegetables to give the resident monks, so we remained there for a few hours soaking up the tranquil atmosphere of this remote place, eating, chatting, and taking photos, before holding a short Buddhist ceremony. All too soon, however, it was time to leave, and I found myself wishing I could have stayed the night, or even longer . . . perhaps next time.

When I first heard the story of the Lion Hut, I imagined that if I were to visit I might have a sense of what it must have been like living on the mountain among the clouds like Master Empty Cloud. I also wondered if I could slip into a deep meditative state like he did while I was there. While I hope to return to the Lion Hut for a longer visit some day, my journey there and the people I met inspired me and taught me that Chan Buddhism is very much alive in China—both in the mountains, where hermits continue their solitary practice, and in large monasteries—just as the old master hoped.