The Many Buddhas of Malaysia The shrine at the Bhutanese Kagyu temple

I knew very little about Buddhism in Malaysia before I landed in that lush green country. My visit was the result of some last-minute changes and I did not have much time to prepare. As a faithful academic, I did make a quick library dash and pulled out a number of histories, but I only managed to skim the surface before it was time to board the plane.

I was whisked off by friends to the Cameron Highlands as soon as I landed—a beautiful region in the mountains, famous for its tea estates (and the setting for the magnificent novel Garden of the Evening Mists by Tan Twan Eng). I was fed at every turn, chaperoned and chauffeured, and entertained with the best sights the Highlands have to offer. At each step of the way, friends explained histories and pointed out details, providing me with an unparalleled introduction to Malaysian culture and love. At the first Buddhist shop I encountered, Buddhas of every variety were mixed together Images from Myanmar, Sri Lanka, the Himalayas, and China, all shared space on the same shelves

The community I shared my time with there was Chinese Buddhist. There were Taoist shrines honored with incense and oil lamps, references to full moon rituals and Confucian mores, and offerings made to the bodhisattvas. I assumed this was what the Buddhist world of Malaysia looked like. I was, however, quickly relieved of that assumption. As I was being dropped off in Kuala Lumpur, one friend offered me a clue about where to look to understand the complexity of Buddhist Malaysian life further: she suggested I find a Buddhist shop to see what was being sold.

She was right. On the shelves of the first shop I found were Buddhas of every variety mixed together. Chinese guardians placed with Tibetan tantric deities and Buddhas from Theravada lands. There were images from Myanmar, Sri Lanka, the Himalayas, and China, all sharing space on the same shelf in the most extraordinary combinations I have ever seen. Malaysia’s population is 65 per cent Muslim, most of whom are Sunni (but there are Ahmadi communities, Shi’a groups, and more). The remaining 35 per cent of the country’s population, however, is made up of a much more diverse range of non-Muslim communities, most of whom are Buddhist. The Buddhist communities interact with each other with extraordinary fluidity and freedom. I was soon whisked away again, this time by another group of friends who hosted and fed me in ways that I was beginning to realize were a regular feature of Malaysian hospitality. From early in the morning until late at night—every night!—we (myself and a colleague, for whom this was a research trip) were introduced to the stunning diversity of Buddhist life around Kuala Lumpur.

The town of Ipoh (and its surrounding areas) provided, without a doubt, the most breathtaking example: in just one relatively small area, our hosts drove us to temple after temple after temple, not one of which was even remotely the same as the last. We did a marathon 16-1/2 hour tour on one day, visiting a Chinese cave temple, a Bhutanese Kagyu temple, a Sri Lankan temple, a Thai temple, and a Tibetan Sakya temple. There were others too, but I eventually lost count (I was admittedly slightly delirious by the end!) I never imagined so much Buddhist diversity could exist in one small area. 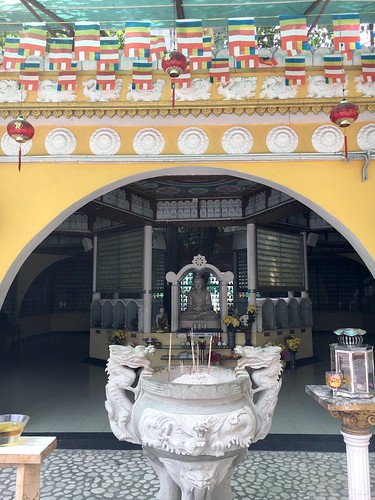 Even more fascinating, the diversity was to be found inside each temple as well, with Thai spirit houses surrounding the Sakya Tibetan temple, Kuan Yin sharing an altar with Guru Rinpoche, and so much more. The diversity was everywhere and it was unlike anything I had ever seen before. I kept wondering why there is so little academic (and even popular) attention being paid to this community. There seemed to be more happening in one square kilometer of Malaysia than in the whole of LA! There were very few tourists and there is virtually no research available about the area. How was all of this cultural diversity being missed by the greater international community?

On the one hand, I must admit that it was delightful not to be swarmed by tourists. To walk through these temples quietly with friends, lighting butter lamps, talking with the people who cared for them, and have enough surrounding quiet to hear the insects humming in the background was a gift I did not take for granted. 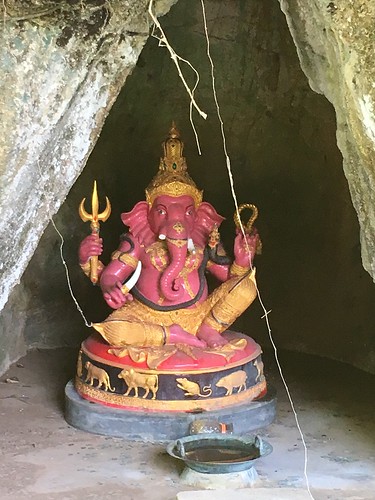 Unexpected encounters at the Bhutanese temple But there is a flip side that I became increasingly aware of as well: the Buddhist communities of Malaysia are a minority and they do not enjoy the same rights and freedoms of their Sunni Muslim counterparts. The history is complicated and layered, but regardless of how the country reached this point, at this juncture in time Buddhism appears to be facing serious obstacles. Every Buddhist I spoke with told me about their mounting concerns as further implementation of a restrictive interpretation of Sharia law was being debated in government.

Currently, Sharia only applies to Muslims, and only to a limited extent (mostly having to do with issues of religious practice and marriage and divorce, but each state has its own interpretive range). Few people I spoke with doubted that the reach of Sharia would be extended to non-Muslims and that criminal law would be added to its domain of authority. I was told by a number of a people that it has already become impossible to build new Buddhist temples in Malaysia (unless they are labelled “tourist sites”—an apparent loophole in the system). 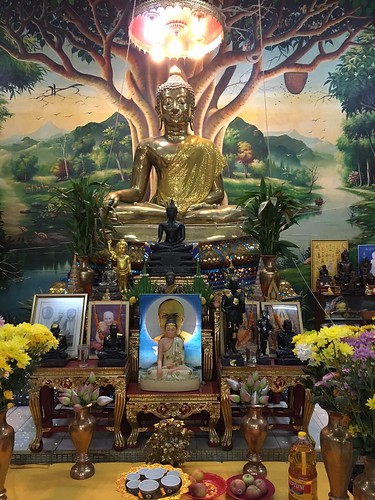 A multitude of traditions are represented at the Thai temple

Combined with a number of other logistical obstacles, Buddhism may soon be prevented from developing further (despite the fact that Article 11 of the Federal Constitution of Malaysia promises freedom of religion). One Buddhist monk I spoke with (who is politically active), told me that it is not a question anymore of whether Sharia will be extended. Sharia, in his words, was already here. He carried his papers with him wherever he went, in case he suddenly encountered trouble as a representative in Buddhist robes.

I am in no place to assess the political situation of Malaysia, but I certainly walked away feeling concern about the future of the country’s extraordinary Buddhist diversity. I unfortunately did not have the opportunity to meet with many members of the Muslim community, and I am sure I would have come away with a different impression if I had. I am certain there is debate, concern, and a vast spectrum of interpretation that I have missed. It was a short (albeit very full) trip, but it was ultimately one-sided. The side I did see, however, consistently gave voice to fears about the future of its Buddhist communities. The rich diversity and playful interaction between the different Buddhist traditions was magnificent, and it certainly spoke to a spirit of openness not always available in other parts of the Buddhist world. 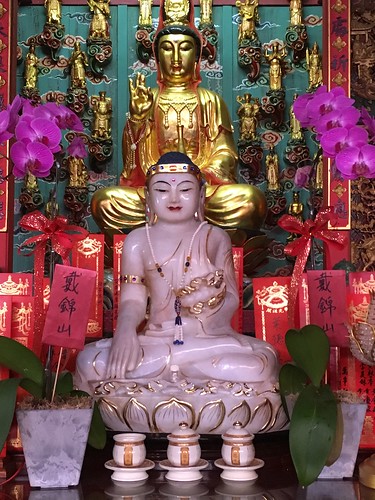 I am a bit embarrassed to write on a community I know so little about. I welcome corrections with humility, but I thought it would be valuable to provide some of my impressions here, given how little attention Buddhist Studies has paid to this fascinating part of the world. May others pick up the thread and develop the conversation with greater skill.

Images courtesy of the author.