The Mongolian Buddhist Canon as a Symbol of Cultural Dialogue between India and Mongolia: An Interview with Prof. Shashi Bala

The Tibetan Buddhist Canon is divided into the words and teachings of the Buddha, contained within the 108 volumes of the Kangyur (the translated words), and treatises and commentaries composed by learned and accomplished masters of India, which are contained within the 224 volumes of the Tengyur (the translated treatises). The Mongolian version of this Buddhist canon—the Kanjur and the Tanjur—was translated from Tibetan into classical Mongolian and are considered to be the most important religious text in Mongolia.

India’s Ministry of Culture has taken up the project of reprinting all 108 volumes of Mongolian Kanjur under the National Mission for Manuscripts, and the volumes of the sacred canon are intended for 75 major monasteries in Mongolia. The publication and distribution of the Mongolian Kanjur has become a symbol of cultural dialogue between India and Mongolia and has contributed to strengthening diplomatic relations between the two countries, which were established in 1955.

The presentation of the Mongol Kanjur to Mongolian monasteries by the government of India was initiated by the eminent Buddhist scholar Prof. Dr. Shashi Bala, dean of the Center of Indology at the Bharatiya Vidya Bhavan in New Delhi. She is a disciple of the renowned Buddhist scholar Prof. Dr. Lokesh Chandra, and was also the editor of the newly published Catalogue of the Mongol Tanjur, compiled by the eminent Mongolian scholar Prof. Byambin Rinchen (1905–77). The catalogue was made with the inspiration and help of the famed Sanskrit scholar, linguist, and politician Prof. Dr. Raghu Vira (1902-63), father of Prof. Dr. Lokesh Chandra. From 1956-58, Prof. Raghu Vira obtained a microfilm copy of the extremely rare Urga Tanjur, kept in Ulaanbaatar. This edition was compiled and translated into Mongolian in the mid-18th century, under the direction of the prominent Gelug scholar from the Amdo region of Tibet, Changkya Rolpe Dorje (1717–86). Prof. Rinchen made a catalogue of the texts, but it was only possible to publish a portion during his lifetime. Prof. Shashi Bala has edited the remainder and published the entire catalogue in two volumes. For her work on the Tanjur catalogue and initiating the presentation of the 108 volumes of the Kanjur to Mongolian monasteries, she was awarded with the Order of the Polar Star (Mong: Altan Gadas Odon), the country’s highest civilian award. The Order of the Polar Star, introduced in 1936, recognizes individuals who have made invaluable contributions through their outstanding work, intelligence, and sincerity, to the prosperity of Mongolia, and for outstanding contributions in the fields of the arts, culture, science, and humanity.

The award was conferred on Prof. Shashi Bala by the president of Mongolia, Khaltmaagiin Battulga, for her contributions to the field of culture during a ceremony on 24 June at the Mongolian embassy in New Delhi. The medal was presented by Mongolia’s ambassador to India, Gonchig Ganbold, and the decree was announced by Minister Counsellor Chanrav Burenbayar.

Buddhistdoor Global had the privilege of speaking with Prof. Shashi Bala about her achievements and her work on the Mongolian Buddhist Canon.

Buddhistdoor Global: Can you describe for us your work on the Catalogue of the Mongol Tanjur? Part one of the Catalogue of the Mongol Tanjur. Image courtesy of Prof. Shashi Bala

Prof. Shashi Bala: The Mongolian Tanjur has played a catalytic role in the spiritual, literary, and scientific evolution of Mongolia. The Mongol Tanjur is a collection of Sanskrit texts translated from Tibetan into Mongolian during the reign of the Chinese Qianlong Emperor (1711–99), the fifth Emperor of the Qing dynasty (1636–1912), with the assistance of older translations from the Yuan dynasty (1206–1368). It was printed on Imperial command between 1742 and 1749 in 225 volumes, and was the climax of a work of translation begun in the early 13th century. The movement to create a national liturgy in the Mongolian language by Mergen Gegen Lubsangdambijalsan (1717–66) contributed to the celebration of the Mongol version of the Tanjur as a national glorification.

Prof. Byambin Rinchen, an iconic Mongolian scholar of eminence, began to prepare a catalogue of the Mongol Tanjur inspired by Prof. Raghu Vira. First of all he had the colophons of the Tanjur in Mongolian script in eight volumes, which were printed as facsimile editions in the Śatapiṭaka Series (Nos. 314–21). Prof. Rinchen had to consult the original xylographed volumes of the Tanjur for his descriptive catalogue. Prof. Raghu Vira used his political position to help with cataloguing the Tanjur, as the study of sacred texts was forbidden at the time. In 1960, the persecution of Prof. Rinchen began and he could not work at the National Library. When he passed away, only three volumes had been printed.

I would like to express my gratitude to Prof. Lokesh Chandra for giving me the catalogue to edit, having faith in me, and for helping to read the second proofs of the catalogue. The work of Prof. Byambin Rinchen is being published in two volumes as my homage to him. This  catalogue of the glorious treasure of the Mongols will reach their sacred land and also Mongolists all over the world. BDG: How did you begin working on the Catalogue of the Mongol Tanjur?

PSB: Since childhood, I have had the highest respect for the scholarly work of Prof. Raghu Vira. I have devoted my whole life to working on the subjects that were so close to his heart. His life and works are the main sources of inspiration for me. He left so much unfinished and undone work because of his sudden death in a car accident. I never met him, but my father told me so much about him. He gave me a book containing condolence messages received from all over the world. Prof. Raghu Vira had such a grand personality that everyone who knew him was shocked. I also read a number of his articles which opened up new horizons in my life. Because of following his path, people call me his manas putri (Skt. mind-daughter).

I became a life-long disciple of Prof. Lokesh Chandra, who is now 94 years old. With his faith in myself and my dedication, he showed me the manuscript of the catalogue by Prof. Rinchin. He had published the first three volumes, but since 1975 the fourth volume has waited in silence in the cupboards of Saraswati Vihar. Prof. Lokesh Chandra asked me if I would be able to edit and publish it. I was thrilled and felt honored to have the opportunity to edit it.

BDG: How has the Indian edition of the Kanjur and the Tanjur contributed to spiritual and cultural relations between India and Mongolia?

PSB: The Kanjur and the Tanjur are sacred texts for the Mongols that were lost during the Cultural Revolution. India is reprinting and distributing all 108 volumes to most of the monasteries in Mongolia. Newly built Mongolian monasteries do not have their sacred literature to sanctify them. Buddhist monasteries are not only centers of faith, spirituality, and religion, but represent a resurgence in Mongolian’s intellectual heritage. The catalogue will reach all monasteries in Mongolia and Russia, and the Mongolists in the world. It is a valuable work for India as well because it contains details of Sanskrit texts translated into the Mongol language. It is the first time that Indian academicians will come to know about this. Moreover, there are a number of Sanskrit texts that were lost forever. They can be recovered from the Mongol translations.

Prof. Rinchin has such an iconic persona in Mongolia that his statue is erected in front of the Academy of Sciences in Ulaanbaatar. His contribution to the cultural and intellectual development of Mongolia is immense. It is highly appreciated by Mongolia that his works are brought to light. Now I shall also present the original manuscript of Prof. Rinchin to Mongolia. 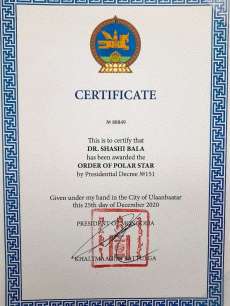 Certificate of the Order of the Polar Star. Image courtesy of Prof. Shashi Bala 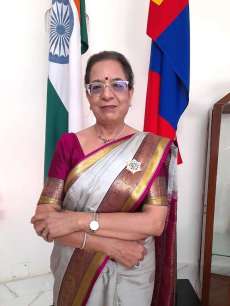 BDG: What does it mean for you to receive Mongolia’s highest civilian award?

PSB: It is not just an award but a great honor for me that has given moments of delight and inspiration. I am grateful to the president of Mongolia for conferring this most prestigious award. For me, the award is not just an acknowledgement of the work already done but also indicates having faith in someone for their future work. I hope I can do my best in the decades to come.

The day I received the news, I was enthused, thinking and planning to do more to enhance cultural relations between our two countries. I feel indebted to Mongols for the preservation of Indian heritage and for respecting the endeavor. Moreover, this award was previously given to His Holiness Shri Shr Ravi Shankar, Prof. Lokesh Chandra, and Ven. Kushok Bakula Rinpoche. This award places my name among those shining stars, which is unforgettable to me.

I also miss my father, Dr. Kailash Chandra, on this historic occasion. He kindled within me the spark of knowledge about Mongolia when I was just 11 years old. I did not know then about any foreign country, living in a small town surrounded by the foothills of the Himalaya.

BDG: Prof. Shashi Bala, thank you so much for sharing your time and knowledge with us. Please accept our warmest wishes for your future endeavors and success.