The Sound of Awakening: Meeting the Mongolian Yogini Kunze Chimed 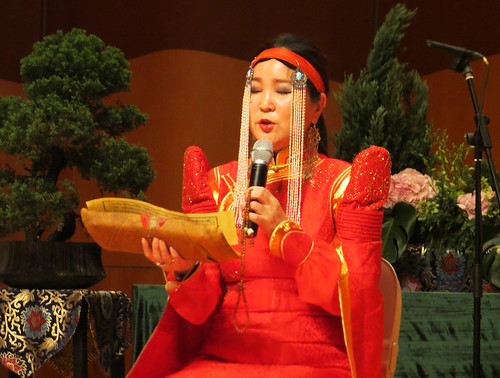 Chod chanting by Kunze Chimed during the cultural program of the Sakyadhita
Conference in Hong Kong. Image courtesy of the author

Kunze Chimed is a Mongolian yogini with a divine voice and considerable experience practicing and teaching Vajrayana Buddhism. In June, I was fortunate to have an opportunity to meet her during the 15th Sakyadhita International Conference on Buddhist Women held at the University of Hong Kong. Kunze Chimed gave three amazing musical performances during the conference’s cultural program of the conference and we met at several workshops and talks. I was deeply moved by her talent, kindness, and humble nature, and was impressed by her comprehensive and in-depth study of the Buddha’s teachings and by her acquaintance with some remarkable Buddhist teachers.

Kunze Chimed was born in Uvurkhangai Province in central Mongolia, an area known for its beautiful landscapes; mountains, forests, steppes, and deserts. During her school years, she was inspired by the rituals she witnessed at the Mother Tara Temple in Ulaanbaatar. In 2001, the Mother Tara Temple was re-established by Lama Zopa—the spiritual director of the Foundation for the Preservation of the Mahayana Tradition—and is now known as the Drolma Ling Nunnery (Drolma is the Tibetan name of the female Buddha, Tara).

Kunze Chimed began her Buddhist training at the age of 17 under the tutelage of Mongolian Buddhist masters who had survived the Communist regime. Two years later, she moved to India to study at Jamyang Choling Institute and the Institute of Buddhist Dialectics—two renowned Buddhist institutions in Dharamsala. She studied at Jamyang Choling Institute,  founded by the American Buddhist nun Venerable Karma Lekshe Tsomo in 1988, for three years. And from 1998–2007, she furthered her study of Buddhist texts and philosophy at the Institute of Buddhist Dialectics, founded in 1973 by His Holiness the Dalai Lama. There she completed a seven-year bachelor’s degree on Prajnaparamita and a three-year master's degree program on Madyamika. Kunze Chimed considers the Dalai Lama as her root teacher (Tib. tsawei lama). Before she met him in person, she felt very deep devotion when she saw his picture in the winter of 1992. Knowing that he is the emanation of Avalokiteshvara, she started to chant the Mani mantra, praying to meet the Dalai Lama in the near future. She explained her first meeting with him as one of the most amazing events of her life: “When I first met His Holiness in 1994, I could not see his face because I was overwhelmed by his splendor.” To express this feeling she used the Tibetan phrase zi ji kyi zil gyi non pa, which literally means “frightened by his splendor.” A few years later, after she learned Tibetan language, Kunze Chimed was able to translate for many Mongolian people who came to Dharamsala to meet His Holiness, and her main teacher—His Holiness Khalka Jetsun Dampa Rinpoche (1933–2012). This eminent Mongolian lama was recognized as the 9th incarnation of Jetsun Dampa Khutuktu (1635–1723), the third-highest lama in the hierarchy of Tibetan Buddhism (preceded by the Dalai Lama and the Panchen Lama) and leader of the Gelug lineage among Khalkha Mongols, the largest subgroup of Mongol people. In 1936, Dampa Rinpoche was recognized as the incarnation of the previous Bogd Khan (“Great Emperor,” a title for the highest lama in Mongolia) but his identity was kept a secret for 55 years due to the persecution of Buddhists by the unitary sovereign socialist state; the Mongolian People’s Republic (1924–92). The 9th Khalka Jetsun Dampa Rinpoche was enthroned in Dharamsala by the Dalai Lama in 1991 and visit in Ulaanbaatar in 1999 and 2009.

Kunze Chimed met His Holiness Jetsun Dampa Rinpoche during her study in Dharamsala and received numerous empowerments, oral transmissions, and teachings from him. She also engaged in several Chod retreats (a practice to sever or cut through self-grasping) at various holy sites under his guidance, with the support of His Holiness the Dalai Lama. Kunze Chimed was fortunate to study the Dharma under several Mongolian and Tibetan lamas and female Buddhist masters. She feels a deep appreciation for all her teachers at the Institute of Buddhist Dialectics, especially its previous abbot, the late Venerable Geshe Damchoe Gyaltsen, and the main teachers of its BA and MA programs—Geshe Lobsang Dawa and Venerable Lobsang Gyatso. Another eminent lama who had a strong impact on her Buddhist training was the 19th Kushok Bakula Rinpoche (1917–2003)—one of the best known lamas of Ladakh. He was recognized by the 13th Dalai Lama as a reincarnation of Bakula Arhat, one of the Sixteen Arhats (perfected persons who have attained enlightenment). From 1990–2000, he served as India's ambassador to Mongolia and helped the revival of Buddhism in the country. During this period, Kunze Chimed was able to receive extensive teachings from him.

After many years of Buddhist study and practice, Kunze Chimed found a beautiful way to express her devotion to the Dharma and transmit the blessings she received from her teachers to others by using her incredible talent to sing. Her magical voice has the power to transfer dimensions of peace and deep spiritual inspiration, combining tender female wisdom with the skillful means of male compassion. When I asked her what the essence of Buddhism is for her, she replied: “Buddhism is so vast and profound; it is difficult to describe its essence. But the short answer is that Buddhism is the development of compassion and wisdom.” The cultivation of these qualities is a process that is hard to explain with words. Vajrayana uses many methods to awaken the consciousness and open the heart without using words, and chanting mantras is one of them. The vibrations of the mantras have the power to heal and transform the mind, making the wisdom of the Awakened Ones more accessible. During the chanting of Kunze Chimed, the listener can perceive the enlightened energy of the deities and feel the timeless streams of the Buddha’s blessings.

Kunze Chimed further developed her singing talent when she was a chanting master (Tib. umze) at Takten Labrang in Dharamsala. This center was founded in 1995 by His Holiness Jetsun Dampa Rinpoche to preserve the Buddhist religion and the practice of dakini meditation in particular. Russian disciples who visited Takten Labrang recorded her chanting in order to learn the melodies. In 2003, she recorded her first CD album in Moscow, which was followed by four more CDs with chanting of Chod practice, Tara mantras, Vajrayogini Chod Tsog, and so on. At present, Kunze Chimed is giving musical performances, chanting workshops, and Dharma teachings in Mongolia and abroad. With her magical voice she transmits the vibrations of the ancient Mongolian culture and the eternal sound of awakening.