The Xuanzang Memorial: Evoking China and India’s Buddhist Past and Future 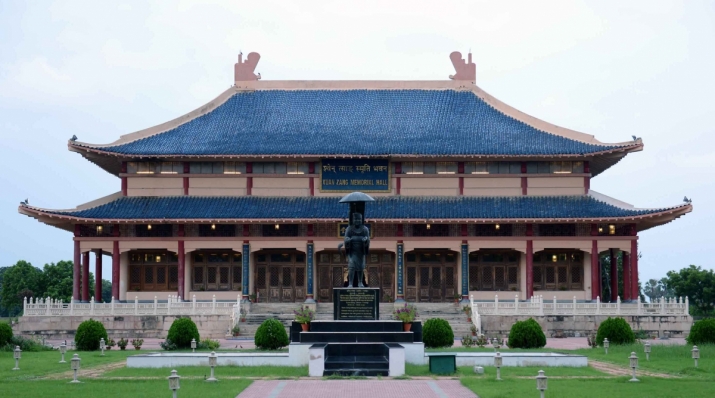 For several years now, I have observed the diplomatic force of Buddhism in the relationship between China and India. The event that first drew my attention to the adoption of Buddhism as a soft power was an exhibit of Gandhara and Mathura art in May 2014, for which we had received an invitation from the consulate of India in Hong Kong and Macau. The consul general at the time, Prashant Agrawal, left a lasting impression on me as a diplomat with a keen interest in Buddhism as a potential bridge linking the two Asian giants.

Mr. Agrawal is by no means the only senior political figure in India with his eye on Buddhism. Attention for this once-neglected religion can be found even at the highest echelons of India’s ruling class. In September 2015, our editorial team attended what was ostensibly a Hindu-Buddhist dialogue, with Prime Minister Narendra Modi as a guest. The event, however, appeared to be more an opportunity for Modi to showcase his Buddhist credentials to Buddhist leaders. He visited Bodh Gaya with a high-security contingent and paid his respects to the Bodhi tree. I have never seen Maha Bodhi Temple so empty of peddlers and beggars. Buddhists from all over the world were flown in and bussed to Bodh Gaya just to witness Modi flaunting his loyalty by meditating under the Bodhi tree, while being serenaded by Theravada, Mahayana, and Vajrayana monks.

The international implications of Modi’s Buddhist diplomacy have not been lost on China. China, in turn, has high hopes for the role of Buddhism in the Chinese Dream. The New York Times (normally known for its negative commentary on the Chinese government) recently reported on president Xi Jinping’s favor for Buddhism. The piece asserts that, according to Xi’s inner circle, Xi looks at Buddhism and other traditional religions with genuine respect. He seems to embrace faith as an a priori virtue for the Chinese Dream, and this endorsement seems to be “incredibly popular among most Chinese.” The New York Times surmises that most see his support for traditional religions as a positive revival of “the imperial Chinese state’s support for certain faiths and belief systems.” Xi is looking back at the past for a template on how to combine faith and politics; a “reimagining of the political-religious state that once ruled China.” (The New York Times) Chinese President Xi Jinping sits on a swing with Indian Prime Minister Narendra Modi at a riverside park in Gujarat in 2014. From scmp.com

Domestically, Chinese Buddhist institutions are valued—and assisted by the nominally atheist Chinese Communist Party (CCP)—if they profess to be working toward a more harmonious society. This harmonious society should be one driven by values such as love of country and spirituality, rather than the post-Mao and Deng materialism that Chinese and foreign observers alike have characterized as empty, rudderless, and harmful to communities and families. One monastic source related to me that, should the Confucius Institutes not succeed as a cultural and spiritual export, reinforcing and exporting Buddhism is Plan B. It is a plan already in motion.

For now, Buddhism divides China and India as much as it unites them. This is, not in the least, because Buddhism is connected to two fundamentally different visions of civilization from Beijing and New Delhi. Many Chinese see its polity or civilization as the inheritor of Mahayana Buddhism. According to them, it was China that kept the Dharma torch alight when it was snuffed out in India during the 12th century. It was China that nurtured Mahayana Buddhism before its seeds—along with other influences of Chinese civilization, such as writing, philosophy, and art—were scattered across East Asia.

India, in contrast, sees Buddhism as part of a larger project of Indic greatness dating back to the fabled Vedic period. It chafes at the suggestion that any country can claim to be a bastion of Buddhism. They, as the birthplace of Buddhist dispensation, should have the biggest claim. After all, it is their borders that hold all the holy sites of the Buddha’s life, save his birthplace in Nepal. India, with some justification, is contemptuous of Nepal’s claim to fame via Lumbini—the birthplace of the Buddha—arguing that Bodh Gaya is more important doctrinally as the site where the Buddha reached enlightenment. Wall art depicting Xuanzang's journey from China to India and back. Image courtesy of author

The Sino-Indian War of 1962, lost by India, casts a long shadow over its diplomacy with China. The invitation issued by the Indian government to the Dalai Lama to visit potentially sensitive border areas is very much part of this policy (the Indian press uses a narrative of Indian defiance in the face of Chinese political pressure). The Indian government justifies its ties to the Dalai Lama (who was welcomed into Dharamsala along with his Tibetan community in 1959), by invoking the historical bond between Indian and Tibetan Buddhism.

I believe that progress will be based on an agreement of the purpose of Buddhism in Sino-Indian relations. What could Buddhism offer as platform of mutual interests? Why invoke it when there are plenty of shared economic and political concerns? Xuanzang's statue with a frieze of Maitreya. Image courtesy of the author

The Xuanzang Memorial at Nalanda, built in 2007, is a structure that could provide a possible answer. The memorial is devoted to Xuanzang (c. 602–64), a Chinese monk who served the Chinese emperor and traveled to India to learn more about Buddhism, bringing back (and translating) the Heart Sutra, among other scriptures. The structure of the memorial is comprised of a single spacious gallery. There is no main hall leading to Shakyamuni Buddha, as in traditional Chinese Buddhist complexes. The only hint of a Buddhist celestial’s presence is the mural of Maitreiya, Xuanzang’s patron divinity, behind the main Xuanzang sculpture. The memorial hosts a detailed, well-research exhibit of Xuanzang’s life, charting his importance as a Chinese emissary, but also as an indispensable source for British archeologists and historians in their search for the forgotten Buddhist sites of India. This Chinese man’s travel journal and other writings indirectly facilitated the rediscovery of Buddhism as an (by origin) Indian religion. Relics of Xuanzang. Image courtesy of the author

Herein lies the potential core of Sino-Indian harmony via Buddhism: how can we celebrate this shared past and the religious exchanges that have had an effect on both nations. How can we celebrate each other’s Buddhist heroes, especially those who crossed the Sino-Indian border? How did they influence modern Chinese and modern Indian Buddhism? Perhaps there should be more memorials built, or exhibits organized about these early religious (and political) exchanges. These might be seen as mere gestures, but at the cultural level, they offer recognition—of the religious heritage of both nations, and of the religious bond that is shared.

Enshrined at the memorial is the relic of Xuanzang, which was given to Jawaharlal Nehru by the 14th Dalai Lama, at the request of Premier Zhou Enlai, on 12 January 1957. Several years earlier in 1954, Nehru had signed the Five Principles of Peaceful Coexistence* with China. The principles indicate that China and India, from the outset, wished to work together based on their common affinities, rather than pulling apart because of their differences. The cultural, geopolitical, and economic benefits would be immense. We can only hope that Buddhism can serve as a common affinity, rather than point of difference.

It is too early to tell what the effect of Buddhism will be on the Sino-Indian relationship. The Xuanzang Memorial, at the very least, it is a statement of what once was and hopefully could be: friendship between two powerful and modern cradles of civilization, radically different in organization and values, yet united by an ancient religion that has no borders. The memorial does not speak only to the past, to a Chinese monk who once set off on a journey to retrieve the authentic scriptures from a non-Chinese land. It also speaks to the future through a simple question: what can we learn from Xuanzang’s story to better the relations between China and India?