What or Who Is a Buddha? The mummified Huineng in Nanhuasi. From sohu.com

The concept of buddhahood is central to Buddhism, constituting one of the three refuges: the Buddha, the Dharma, and the Sangha. Yet it is not immediately clear who or what is a “buddha?” As is well known, “buddha” literally denotes “the Awakened One.” But what does this concretely mean? Today, I will reflect on what it means to be a buddha and especially consider two texts and one phenomenon from Japanese Buddhism that shine a new light on this central tenet of Buddhism.

The first question to be answered is: where does one become a buddha? Siddhārtha Gautama became “the Buddha” after he ceased the production of karma and entered nirvāṇa. According to the tradition, he attained awakening at the age of 35 and lived 45 more years. During this time and before he entered the “final nirvāṇa” (parinirvāṇa), he was a buddha in this world, i.e., this realm of saṃsāra. And this is where things become complicated.

In Mahāyāna Buddhism, “awakening” (bodhi) in saṃsāra as, for example, described in the Vimalakīrti Sūtra, is associated with bodhisattvas, “awakening” in the “beyond” is associated with buddhas residing in various forms of heaven—for example, Amitābha Buddha is said to reside in the Pure Land of Sukhāvatī. The Mahāyāna Buddhist doctrine of the “three bodies of Buddha” (trikāya) distiguishes between the “transformation body” (nirmāṇakāya), the Buddha’s body in saṃsāra; the “bliss body” (saṃboghakāya), the Buddha’s body in nirvāṇa or in Sukhāvatī; and the “truth body” (dharmakāya), that is, the Buddha’s body in all possible realms. According to this doctrine, there are buddhas in saṃsāra, the relam of birth and death, in the Pure Land, and beyond.

Then there are other phenomena that complicate our understanding of what it means to be a buddha: in China, references are made to “living buddhas” (huofo) and “flesh body bodhisattvas” (roushen pusa). The former term tends to identify reincarnated tulkus and lamas in Tibetan Buddhism, who are considered incarnations of bodhisattvas. However, this term has also been used to describe people who are known for extraordinary acts of compassion, such as, John Rabe (1882–1950), who is said to have protected the lives of more than 200,000 Chinese during the Nanjing massacre. The latter term, “flesh body bodhisattvas,” refers to monastics who are said to have been mummified as a result of their meditation practice. The most famous “flesh body bodhisattva” is Huineng (638–713), the sixth patriarch of Chan Buddhism, whose body is preserved at the temple Nanhuasi in Shaoguan, Guangdong Province. The mausoleum where Kūkai sits in meditation in the Okunoin on Mt. Kōya. From wondertrip.jp

In the northwest of Japan, there are 16 so called “buddhas in this body” (sokushinbutsu).** They are named after Kūkai’s notion of “becoming a buddha in this body” (sokushinjōbutsu). These monks spent 3–7 years in the mountains with the goal of mummifying themselves through arduous, ascetic practices. They combined mountain practices including chanting in waterfalls (takigyō) in any weather and the spiritual practice of the “three mysteries” (sanmitsu), consisting of purifying body, speech, and mind through the practice of embodying mudras, reciting mantras, and visualizing maṇḍalas*** with a diet of nuts, tree roots and bark, and berries. This diet was referred to as “the practice of eating trees” (mokujikigyō). Toward the end of their practice they also drank urushi made from tree sap. The diet was aimed at reducing one’s body fat, killing internal bacteria, and embalming one’s internal organs while remaining alive.**** 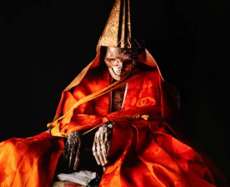 The mummified Shinnyokai in Dainichibō. From dainichibou.or.jp The two most famous of these “buddhas in this body” are Ven. Shinnyokai, enshrined at Dainichibō, and Ven. Tetsumonkai, enshrined at Chūren-ji. Both temples lie in the vicinity of Tsuruoka City in Yamagata Prefecture. It was only during and right after the end of the Edo period (1603–1868) that monks engaged in this practice, and it has since become illegal in Japan. However, adherents today remain convinced that the bodies of these mummies have causal efficacy and can perform miracles. Dainichibō and Chūren-ji—and to a lesser extent Kaikō-ji in Sakata City, Yamagata Prefecture—serve as popular destinations for pilgrims.

This practice is, of course, an extreme outlier and, it goes without saying, not at all representative of any form of Buddhism. But it bears some resemblance to the phenomenon of the “flesh body bodhisattvas” and raises the deeper philosophical question of what it means to be a buddha who overcomes saṃsāra or birth and death, yet still lives in saṃsāra and birth and death. It also raises the question of what “life and death” really means. Be that as it may, Kūkai describes the idea of “becoming a buddha in this body” as follows:

In my poem I have referred to “the multi-layered ‘Indra’s net’ called ‘this very body’” as a metaphor. It conveys how the three mysteries of all the deities, numerous as specks of dust, are perfectly interfused and without obstruction. “Indra's net” refers to the jeweled net of the god Indra. “Body” here means my body, Buddha’s body, and the bodies of all sentient beings. These we call “body:” Then there are also the four kinds of buddha bodies: the self-nature, enjoyment, transformed, and equally flowing body. . . .  And there are three more types: mantric letter, mudra seal, and mandala shape. All these bodies are multilayered vertically and horizontally—just as the reflected image of a lamp’s light crosses and enters into a mirror. Thus, that body is this body, and this body is that body. The Buddha’s body is the body of sentient beings, and the bodies of sentient beings are the Buddha’s body. They are not the same and yet the same; not different and yet different. All three are thus equal and without obstruction.*****

Kūkai describes buddhahood as the reflection of the whole cosmos in one particular body. In other words, a buddha is the body of a sentient being who becomes the focal point of the whole cosmos. What all phenomena and definitions discussed in this essay have in common, albeit in extremely divergent ways, is the use of our suffering bodies to perform acts of compassion and to alleviate suffering. Every single body of an individual sentient being is the body of a buddha. A buddha performs acts of compassion through the bodies of sentient beings. In other words, we are asked to be detached, unselfish, and compassionate. To paraphrase Dōgen’s observation, our suffering bodies constitute the locus of liberation from suffering. This is what it means to be a buddha!

**** Mummies that made themselves (YouTube) or the essays Sokushinbutsu: Buddhist Self-Mummification (Buddhist Self Mummification) and The Japanese Monks who Mummified Themselves while still Alive (All That Is Interesting)

“Do You Want to Become a Buddha Like Shakyamuni?” Asks Amitabha
Aloha and the Inner Buddha
Are You Searching for Buddha or God?
Book Review: Wendy Garling’s The Woman Who Raised the Buddha
The Buddha Was Just Here