Who Am I — Self-discovery in Japanese Zen Practice

The Japanese Zen master Dōgen (1200–53) famously said, “To study the Buddha way is to study the self.”* A popular meditation manual known and used in East Asian Zen Buddhism is the (in)famous “Ten Ox-herding Pictures.” Telling the story of a herder seeking an ox, these pictures outline the process of deepening self-awareness within the framework of Buddhist soteriology, i.e., the theory of karmic bondage and liberation.

There are two basic sets of the Ten Ox-herding Pictures: Puming Dabai’s (11th century) and Kuoan Shiyuan’s (12th century). The pictures of both sets are accompanied by descriptive titles as well as poems. 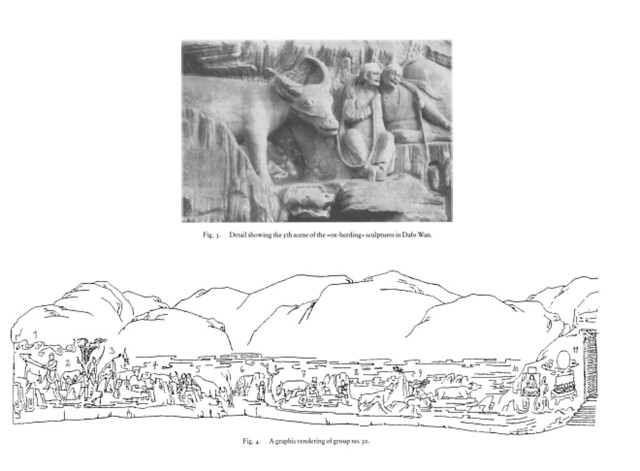 Puming’s pictures, specifically pictures 1–7, focus almost exclusively on the process of taming the ox. The domestication of the ox is indicated by a change in color: in this process, the color of the ox changes from black to white, indicating purification. While the ox disappears in picture No.9, picture No.8 is called “Each is forgotten” (Ch. xiangwang). Picture No.9 has the title “Solitary illumination” (Ch. duzhao) and picture No.10 “Both have vanished” (Ch. shuangmin).** The poem assigned to picture No.8 declares “The person is without a mind, so is the ox.”*** No.9 depicts the person alone with the ox; picture No.10 reveals an empty circle. 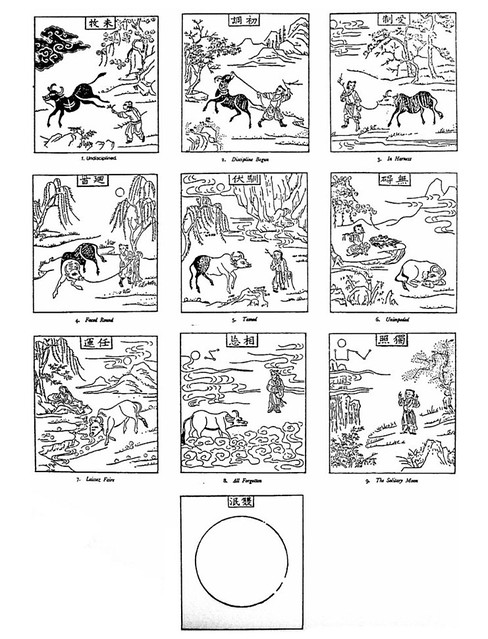 In addition, Kuoan exchanges the linearity of Puming’s set for the circle of practice. Usually, the 10 pictures are depicted as a sequence with the last picture, titled “Entering the market place with overflowing hands,”**** implying the beginning of a new journey undertaken by the disciple of the person who has become a teacher. Sometimes, Kuoan’s set is even presented as a circle in order to indicate an endless process during which the student becomes a master and new students undergo the same process of transformation. A similar circularity is indicated in the 2003 Korean film Spring, Summer, Fall, Winter . . . and Spring (Bom yeoerum gaeul gyeoul geurigo bom).

But how are we to understand Kuoan’s ox-herding pictures? It is tempting to superimpose the spiritual path generally outlined by texts of mainstream Mahāyāna Buddhism onto these pictures: No.1 portrays the state of “ignorance” (Skt. avidyā). While Kuoan’s title for this picture is “Searching for the bull,”**** the picture itself only depicts a lost person. We see a person who does not have self-knowledge, a person without a sense of direction, a person at a loss over what life has to offer. Picture No.2, “Seeing the traces,”**** indicates a path or possibility and seems to coincide with the time a person hears the Dharma or, as in the case of Huineng (638–713), the Diamond Sūtra (Jingangjing). Pictures 3–6 map out the process of meditation depicted, as in the case of Puming, as a struggle between the person and the ox. Picture No.8 depicts “emptiness,” picture No.9, the “Return to the origin,”**** “wisdom” (Skt. prajñā), and picture No.10 “compassion” (Skt. karuna). More concretely, the person who “Enters the city with overflowing hands” is a bodhisattva. 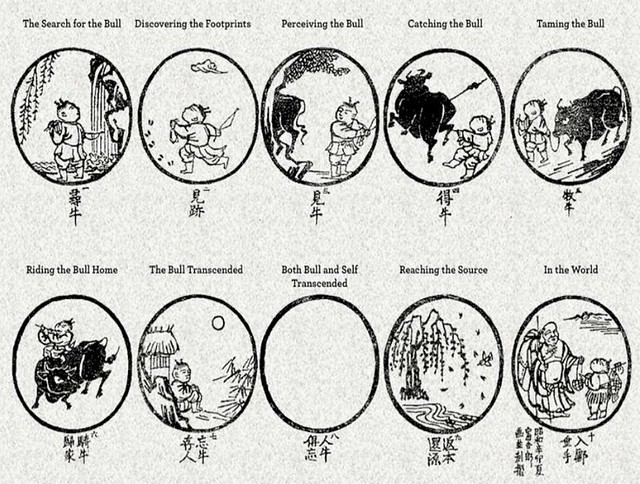 Most interpreters seem to agree on this rough outline. However, the key question is how do these images describe the meditative practice and its goal: What/who does the person struggle with during meditation? What are the criteria of emptiness? How are we to understand wisdom and compassion?

The problem is many commentators disagree on how to interpret the ox. Many Japanese interpreters, such as Ueda Shizuteru and Akizuki Ryomin (1921–99), believe that the ox signifies the “original self” or even “original awakening” (Jap. hongaku). But if this is the case, why does the “original self disappear (No.7) before the little self (No.8) does? Wouldn’t “original nature” be with the practitioner from the beginning to the end? The Korean master Gyeongheo (1826–1912) and, to a certain degree, Akizuki suggest that the ox symbolizes “defilements” (Skt. kleśa). While this is a very compelling reading that illustrates the struggle during the meditative process, the question arises of why the defilements appear only in picture No.3. The Korean master Kusan Sunim (1909–83), finally, identified the ox as the “key phrase” (Kor. hwadu) the Zen practitioner reflects on. Of all these interpretations, the last one seems to make the most sense. 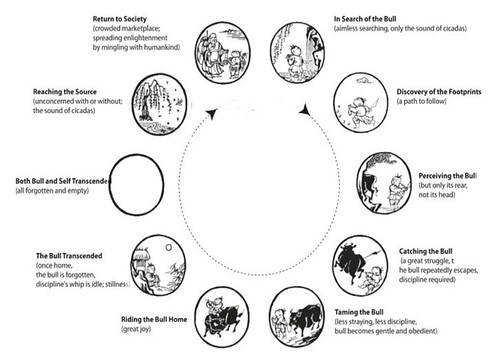 Kuoan’s 10 pictures arranged in a circle. From pinterest.com

Inspired by Walpola Rahula (1907–97), who claims that the ox symbolizes the “mind” (Skt. citta), I would like to suggest that the person signifies the self that knows and the ox the self that is known. After all, the meditative process constitutes an exercise in self-discovery. If we apply this symbolism, ignorance is the lack of self-knowledge and meditation the struggle with the preconceptions and images we have of ourselves. Picture No.7 illustrates the moment in which we realize that not a single image we have of ourselves is correct and that all conceptions of the self are inherently empty. Picture No.8 signifies the disappearance of the self that projects its own preconceptions onto reality. If, as this series of pictures suggests, such a stage is possible and we are actually able to end our projections and discard our preconceptions, then—and only then—can we see reality as it is and respond to the suffering of all sentient beings with a compassionate heart. This is the nature and purpose of selfless self-awareness.