Amid lukewarm relations between China and Japan, a pioneering 17th century Buddhist monk may offer a path to warmer ties between these two economic and cultural powerhouses.

In an address to some 3,000 Japanese businessmen attending a Sino-Japanese exchange in Beijing back in May 2015, Chinese president Xi Jinping recounted the story of how the prominent Chinese Buddhist monk Yinyuan Longqi, better known in Japan as Ingen Ryuki, traveled to Japan in the 17th century, in the process establishing ties between the two nations, the impact of which can still be felt today. Since Xi’s address, a marked rise in interest in Ingen’s legacy has been reported. 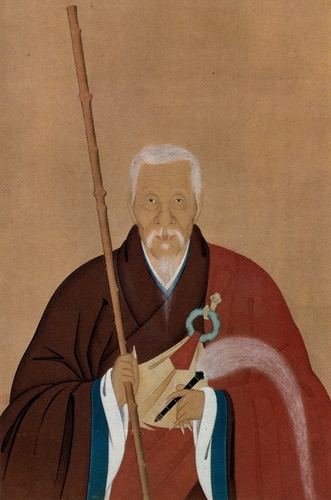 Portrait of Ingen Ryūki by Kita Genki, dated 1671.
From wikipedia.org

The monk Ingen (1592–1673) was a renowned poet, and calligrapher affiliated with China's Linji school of Chan Buddhism. In Japan, he is perhaps best known as the founder of the Ōbaku school of Zen Buddhism. Born in Fujian Province during China’s Ming dynasty (1368–1644), Ingen was ordained at the age of 28 at Wanfu Temple, of which he became the abbot in 1637 and again in 1646. During this time he is credited with being instrumental in establishing the temple and the surrounding area of Mount Huangbo as a thriving center of Chinese Buddhism. In 1654, Ingen traveled to the Japanese city of Nagasaki. While in Japan he founded the Ōbaku school, and in 1661 established Manpuku-ji, the head temple of Ōbaku in Uji, on the outskirts of Kyoto. Ingen died at Manpuku-ji in 1673 at the age of 80.

Xi, who reportedly first became familiar with Ingen’s story while working as a provincial government official in Fujian, used Ingen’s story to emphasize the importance of people-to-people exchange between countries. “During his years in Japan, great master Ingen not only spread the Buddhist scriptures, but also brought about advanced culture, science, and technology, bringing about a critical impact on economic and social development in Japan under the Edo period,” Xi asserted. (South China Morning Post)

Xi also recounted his own visits to Japan in 2009, which included Kitakyushu in Fukuoka Prefecture, and how it helped him to understand the “inseparable” cultural and historical ties between China and Japan. (Nikkei Asian Review)

In August last year, some 200 Chinese Buddhists commemorated Inge’s arduous sea voyage to Japan by traveling to Nagasaki on board a luxury cruise ship. The 17th century monk also inspired Fuqing-born trader Chen Xi, who recently launched a branch of the Cultural Promotion Association in Japan: “From the Ming to Qing dynasty, China has lost lots of [historical] materials. But such materials are still left in Japan,” Chen said. “I want to unearth them and bring them back to China. Now it’s only a blank.” (South China Morning Post)

At Manpuku-ji, plans are underway to commemorate 350 years since Ingen’s death and to invite Chinese guests to attend the historic occasion. Meanwhile, Hohdo Matsuo, the head monk at Kofuku-ji, another Japanese temple with ties to Ingen, expressed surprise at the sudden increase in cultural exchange with Chinese Buddhists. Matsuo visited Ingen’s home Wanfu Temple in January, completing a pilgrimage that his own father was prevented from making make as China was previously not open to visits by foreign monks.

On the political front, Tokyo recently confirmed that Toshihiro Nikai, secretary-general of Japan’s ruling Liberal Democratic Party, will attend a summit in Beijing later this month that will discuss Beijing’s “One Belt, One Road” initiative to build a new Silk Road to revive the ancient Silk Road trade route as means for soft diplomacy and commercial exchange. “Given the international situation starting with North Korea, mutual understanding between Japan and China is vital,” Nikai told a news conference late last month. (Reuters)

Japanese Prime Minister Shinzo Abe, left, shakes hands with Chinese President Xi Jinping in Hangzhou. The pair are due to meet again in July. From scmp.com

The decision has been interpreted as a clear indication that Japan is open to improving bilateral relations amid heightened international concern over North Korea. Leaders from China and Japan are also expected to make official visits to other’s countries this year and next to coincide with the anniversaries of the 1972 Japan-China Joint Communiqué and the 1978 Treaty of Peace and Friendship.

Lotus Tour of the Silk Road, 15–23 October 2016: Wuwei City Museum
Buddhistdoor View—One Belt, One Road: Ideas for Buddhist Dialogue across Eurasia
From the Gobi to the Getty: Buddhist Art from Dunhuang on View in Los Angeles