Chinese archaeologists have announced the discovery of what they believe to be the oldest Buddhist stele ever found in Tibet, dated to the 9th century.

Standing 1.85 meters tall, the stone stele bears a carved image of a standing Buddha, with 24 lines of old Tibetan script on its left side and 19 lines of Buddhist prayers on the right side. 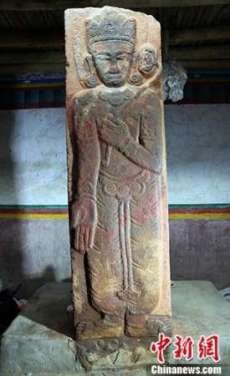 The 9th century stele discovered in western Tibet. From ecns.cn

Shargan Wangdue, an official from the Tibet Cultural Relics Protection Institute, said the stele was discovered in Purang, in Ngari Prefecture of the Tibet Autonomous Region.

The official said scholars believed the stele was erected in 826 or 838, during the powerful Tibetan Empire (618–842), known in Chinese as Tubo. “This stele shows Buddhism was already being practiced during the Tubo period in the western part of Ngari,” he added.

Ngari Prefecture in western Tibet, some 1,600 kilometers west of Lhasa, includes part of the Aksai Chin area, a disputed region claimed by India but over which China has administrative control. Ngari was once the heart of the ancient kingdom of Guge, and later formed part of Ü-Tsang, one of the three traditional provinces of Tibet. The prefecture is also home to Mount Kailash (6,714 meters), the main peak of the Transhimalaya mountain range and a major pilgrimage site for some Buddhist traditions.