Bangla Translation of the Entire Pali Tripitaka Presented in Bangladesh On 25 August, the Tripitaka Publishing Society (TPS) presented a Bangla (Bengali) translation of the entire Tripitaka—the earliest compendium of Buddhist scriptures, originally written in Pali— at Rajban Bihar Pagoda, Rangamati District in Bangladesh. Venerable Pragyalankar Mahasthavir, the abbot of Rajban Bihar, unveiled the 25-volume translation titled Pabitra Tripitak (The Holy Tripitaka), before an audience of Buddhist monastics, devotees, scholars, and state representatives from the various regions of the country.

“Not only Buddhist will benefit through this publication, it will also enrich Bengali literature,” said Ven. Indragupta Bhikkhu, chief editor of the TPS. “Never before has such a large collection of writing been added to the annals of Bengali literature at one time.” (Ekattor TV)

“This is the first time the entire Tripitaka has been published 25 volumes in Bangla,” said Gautam Deowan, vice-president of the Rajban Bihar Committee. “In the past, parts of the Tripitaka were translated and published, but never before has the entire collection been published together.” (Ekattor TV)

Speaking on the occasion of the unveiling, Her Majesty Yan Yan, Queen of the Chakma Circle,* expressed hope that the translation would provide all people, even those outside monasteries and Buddhist academies, with an opportunity to read and understand the Tripitaka. (Dhaka Tribune) 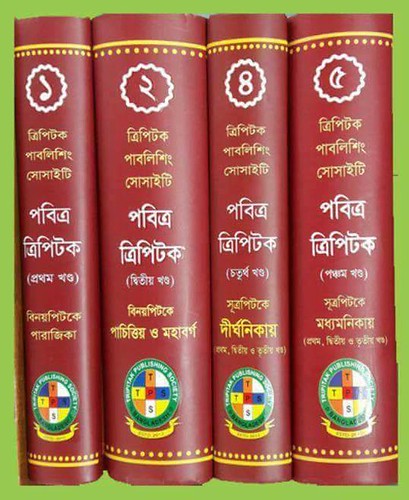 The initiative to present the entire Tripitaka in Bangla began in 2000, when the renowned Buddhist teacher and previous abbot of Rajban Bihar, Ven. Sadanananda Mahasthavir (Bana Bhante) told his students that he hoped they would be able to publish the whole Tripitaka in Bangla. Soon a group of Buddhist monks started studying Pali to fulfill their master’s wish. The monks studied Pali under Ven. Praggavansha Mahathera, a renowned Buddhist scholar in Bangladesh. He taught the monks from 2002–06, and in 2007, the monk started the translation of the volumes. To carry out the work involved in the publication of the scriptures, they founded the Tripitaka Publishing Society on 14 September 2012, and after five years the society was able to present the Bangla translation of the entire Tripitaka in 25 volumes.

The Tripitaka, also known as the Pali Canon to Theravada Buddhist, is the traditional term for the original Buddhist scriptures. The Tripitaka consists of three parts: the Vinaya, the Sutta, and the Abhidhamma, composed between 500 BCE and the start of the common era.

The partial translation of the Tripitaka in Bangla is almost a 150 years old. In 1887, the Sutta Nipata was translated into Bengali by Dharmaraj Barua. In 1916, Ishan Chandra Ghosh translated the Jataka text. A few years later, in 1928, Ven. Praggalok Mahasthavir established the Buddhist Press Mission in Rangoon to translate the entire Tripitaka into Bengali. Along with a group of experienced translators, he translated several volumes of the Tripitaka, but when World War II started, the Buddhist Press Mission was damaged in a bomb blast and the translation project was halted. After the war, some individual translators translated several volumes of the Tripitaka, but no complete translation was published until this year. A set of Tripitaka was brought to the Kartala Belkhain Saddharmalankar Bihar, Patiya, Chittagong. From Ven. Sunanda Facebook

Buddhism has a long history in Bangladesh, despite centuries of Muslim rule. Today, only around 1 per cent of the total population identify themselves as Buddhists. During the British rule of Bangladesh (1757–1947), Buddhism experienced a revival and many Buddhist temples, Pali institutions, schools, and organizations were founded. The Buddhist Sangha in Bangladesh expressed hope that the recent publication of the entire Tripitaka will lead to a similar revival of Buddhism, or that it will at least make the scriptures more accessible to the broader population.

* The Chakma royal family, one of the major royal houses of Buddhism in South Asia

Marginalized and Ignored: The Corrosion of Bangladeshi Minority-Government Relations
“Buddhist Voices from the Land of Rivers:” Let Hope Rise from the Ashes
The Urgency of Recognition: Female Buddhist monastics in Bangladesh
Buddhist Archaeological Sites in Bangladesh
Jewel in the Crown: Bengal's Buddhist Revival in the 19th and 20th Centuries