His Holiness the Dalai Lama in Bodh Gaya. Photo by Tenzin Phende

BODH GAYA, India—The 34th Kalachakra Initiation by His Holiness the Dalai Lama, which runs from 3–14 January, has transformed the streets of Bodh Gaya in the eastern Indian state of Bihar. The usually quiet and dusty town in which Shakyamuni Buddha attained enlightenment, dotted with shrines and temples representing all Buddhist traditions, has become a heavily guarded river of humanity. People of all ages, ethnicities, and nationalities, monastics and lay Buddhists alike, walk with open hearts alongside an array of mendicants seeking alms, under the watchful gaze of pickets of armed police, toward the Kalachakra site, enclosed in a vast tent, where the almost two-week-long ceremony is being held.

Those who do not arrive early enough sit within the shelter of the expansive hall, are accommodated outside, where loudspeakers and video monitors broadcast the Dalai Lama’s teachings to the attendees. A dedicated team of interpreters in booths broadcast simultaneous translations, enabling many participants from overseas to listen to the teachings in any one of 15 languages. Underlining the enormous coordinated effort that has gone into organizing an event of this scale, a phalanx of super-efficient saffron-robed monks bear teapots and baskets of bread as ritual refreshments for the hundreds of thousands of devotees seated inside and out. The organizers expect to report record attendance figures for the 34th Kalachakra. Photo by Paolo Regis

The 34th Kalachakra, has already exceeded attendance figures for the previous two empowerments in 2014 and 2012, and the event’s organizers expect to record record figures for the event, according to the press office of the Tibetan Central Administration (CTA). Inexcess of 200,000 registered attendees from 92 countries have arrived so far, including 40­–50,000 from Buddhist regions and communities in the Himalayas, and more than 7,000 from countries in Europe and North America.

The Kalachakra (Wheel of Time) Tantric empowerment is conducted by His Holiness the Dalai Lama, 81, every 2–3 years, including January 2006 to mark the 2,550th anniversary of the original teaching given by the historical Buddha at Amaravati in southern India. The empowerment is the most complex in the Vajrayana tradition, explicitly addressing in five chapters the structure of the entire cosmos (outer), human psychophysical constituents (inner), and the processes (other or alternate) by which the outer and inner are purified and which are detailed in three chapters on initiation, sadhana, and wisdom.

As part of the rituals, the Dalai Lama and countless lamas and monks painstakingly prepare a large sand mandala representing the Wheel of Time, in accordance with Tibetan Tantric tradition, and each morning intense prayers and rituals are performed to prepare for the Kalachakra empowerment—the formal transmission of the blessing to the thousands of participants. After morning prayers each day, His Holiness gives an oral transmission with a detailed explanation of selected texts, such as the Stages of Meditation by the great master Kamalashila (740–795) and The Bodhisattva Way of Life by the monk and scholar Shantideva (685–763). His Holiness exhorts the participants to apply the teachings in daily life, and to keep these texts at hand and study them seriously to help uphold the commitments they undertake during the transmission.

The 34th Kalachakra is the first to be organized by the Central Tibetan Administration (CTA), the Dharamsala-based Tibetan government-in-exile, which has also facilitated and sponsored visits for thousands of poor and physically infirm Tibetans from Dharamsala and other parts of India.

During a press conference for the event on Sunday, Sikyong Dr. Lobsang Sangay, the head of the CTA, expressed regret that the Chinese government had pressured Tibetans living in China not to attend the Kalachakra. “It took thousands of Tibetans living under Chinese occupation many years to obtain passports and visas, and they came to Bodh Gaya legally to celebrate the place of enlightenment of Buddha Shakyamuni, and to attend Kalachakra,” he said. “But we heard news of dozens of cases where Chinese authorities visited their homes back in Tibet where their families were threatened to have their benefits withdrawn and other political consequences if they would not return home between 1–14 January.” 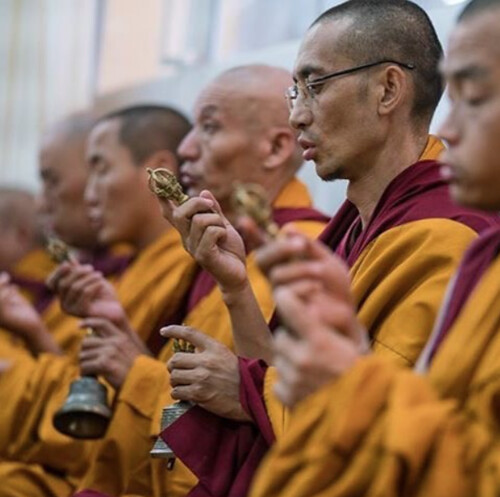 Throughout the ceremony, the Dalai Lama has been offered chants and devotional songs by children and monks. “I am now like an old grandfather, feeling well and relaxed,” His Holiness declared towards the end of his teaching on Sunday. He also highlighted that this year marks the first time that the academic title of Geshema has been awarded to 20 nuns, in recognition of of their attainment of the highest academic degree in Tibetan Buddhism.*

The Kalachakra is a uniquely powerful and inspiring event, where the collective power of the hearts of hundreds of thousands of devout, dedicated Buddhist practitioners led by an incarnation of compassion send ripples of good will and bliss throughout the world and beyond. The spiritual activities and prayers undertaken during the transmission are dedicated to world peace and the happiness of all sentient beings. A wonderfully auspicious circumstance indeed!