The Tale of the Whale, a new book for children by British author and physiotherapist Karen Swann and illustrated by ordained British Buddhist and artist Padmacandra, was recently published in Europe, seeking to address the concepts of interconnection and environmental stewardship through a variety of overlapping themes and areas of interest, including plastic pollution, environmental crisis, children, and Buddhist thought.

Promising “a magical journey of wonder and discovery from misty seaside shorelines to cold ice-capped seas,” The Tale of the Whale recounts the story of a friendship between a young child and a humpback whale, and invites the reader—children and adults alike—to join their adventures through the oceans, along the way examining our shared responsibility toward the environment, with a particular focus on the shameful scourge of plastic pollution.

Where land becomes sky and the sky becomes sea,
I first saw the whale, and the whale first saw me.
And high on the breeze came his sweet-sounding song —
‘I’ve so much to show you, if you’ll come along.’ (Scallywag Press) 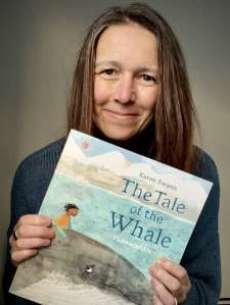 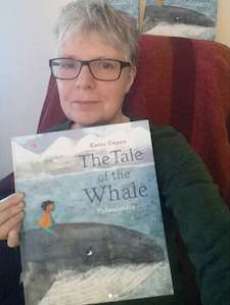 The Tale of the Whale, which marks the first outing into children’s literature for both Swann and  Padmacandra, tells the story of a beautiful friendship that also captures the essential interdependent relationship between humans and the sea and the beings who live within it.

Padmacandra, an ordained member of the Triratna Buddhist Order and associated with the Cambridge Buddhist Centre in England, explained how the message of the book complements her own Buddhist training and commitment to living with kindness and mindful awareness, with the aim of waking up more and more to the truth of the interconnectedness of all life.

“I was delighted to be asked to illustrate The Tale of the Whale, which speaks to this interconnectedness so lyrically and beautifully,” Padmacandra explained. “Karen and I talked about the importance of the connection between the child and the whale and their friendship throughout the book, as well as connecting with the awesome beauty, joyfulness, and depth of the ocean. It was so inspiring to research and make the images of all the ocean creatures, and their home, trying to communicate this beauty and connectedness.” As the bond between the child and the whale deepens, the child learns to see from the perspective of the whale as they explore the world together. However, while the two have many remarkable experiences and share the beauty of the world, the unlikely friends also discover the extreme impact that plastic pollution is having on marine environments beneath the waves, gently delivering a message about the reality of environmental fragility to support children’s understanding of environmental issues and the urgent need for action.

“The story is ultimately a tale of friendship and discovery that I hope will leave a lasting impression on those who read or hear it,” said author Swann. “I would like to think it might pave the way for discussions about the beauty of our oceans and the way that we share our world and live together within it.”

The Tale of the Whale was released in the Australia, the Netherlands, Slovania, Turkey, and the UK in March, and is scheduled to be published in the United States next year.

Book Review: In the Footsteps of Bodhisattvas: Buddhist Teachings on the Essence of Meditation
Welcoming Voices from Larung Gar
The Life of the Buddha: An Illustrated Tale of Truth and Awakening