The refurbished Sir Joseph Hotung Gallery of China and South Asia. From blog.britishmuseum.org

The British Museum’s Sir Joseph Hotung Gallery, newly opened after a two-year-long refurbishment program, offers an exciting opportunity to gain an intimate new perspective on its unparalleled collection of Amaravati Buddhist art, widely considered to be one of the museum’s greatest treasures.

The Sir Joseph Hotung Gallery of China and South Asia—the British Museum’s largest single gallery, running the length of the museum building—reopened in December after major renovation that has transformed the way exhibits can be accessed by the public. The full launch of the gallery follows the official opening by Queen Elizabeth II in November, which allowed partial access to some sections. Britain’s monarch originally opened the gallery 25 years ago in 1992.

“It is the longest gallery in the museum,” said Jane Portal, keeper of the museum’s Department of Asia. “It’s 115 meters—as long as a football pitch—and the idea is to make it less daunting and more accessible.” (The Guardian)

Perhaps the crowning highlight of the transformed exhibition space are the Amaravati sculptures, the largest collection of early Indian sculptures outside of South Asia and now on display in a dedicated room at one end of the Sir Joseph Hotung Gallery. “They are just as important as the [Parthenon] marbles, but people don’t know about them so much,” Portal explained. (The Guardian) 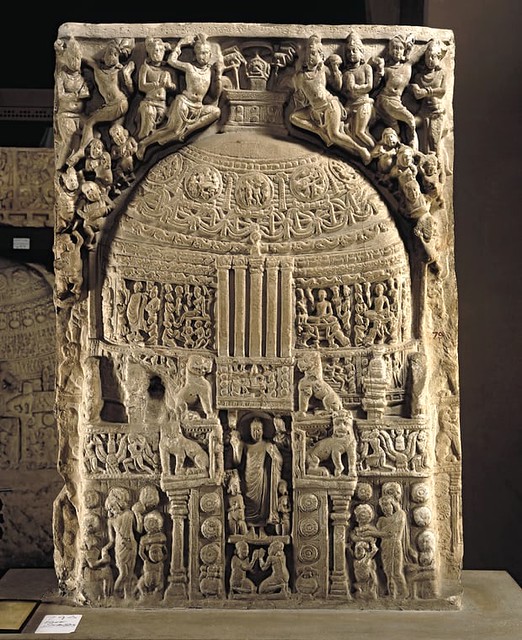 A two-sided relief from the Great Shrine at Amaravati. From usartnews.com

Originating in the southeast Indian state of Andhra Pradesh, the Amaravati limestone sculptures and inscriptions, which number more than 120 in total, date from the 1st–3rd centuries CE. The majority are relief sculptures that adorned a wall around the Great Shrine of Amaravati, one of the world’s most important Buddhist monuments. Many of them depict scenes from the Jataka stories of Shakyamuni Buddha’s previous incarnations.

The shrine, founded around 200 BCE near the ancient city of Dharanikota, flourished for more than 1,000 years, before gradually falling into disuse during the 14th century. By the late 18th century, materials from the site were being reused for new buildings and temples.

“The Museum is hugely grateful to Sir Joseph Hotung and his fellow trustees for the opportunity to renovate this important gallery,” said British Museum director Hartwig Fischer. “The refurbishment will allow us to include other material from the collection and bring the story of China and South Asia up to the present day. Understanding Asia is crucial for all our futures and this gallery will help visitors to better understand the long and significant history of these regions.” (USA Art News)

While half of the Sir Joseph Hotung Gallery offers a detailed glimpse of South Asian history—from India and Pakistan to Bangladesh and Sri Lanka, the other half of the space presents a chronological history of Chinese art from 5000 BCE to the present day. The British Museum, founded in 1753 and the first national public museum in the world, is home to one of the largest collections of Chinese historical artifacts in the Western world.

Among the works on display in the Chinese section are iconic blue and white porcelain from the Ming dynasty (1368–1644), Tang dynasty (618–907) tomb carvings, contemporary ink paintings, as well as a comprehensive exhibit of Chinese jades, most of which are on loan from the personal collection of Sir Joseph Hotung. 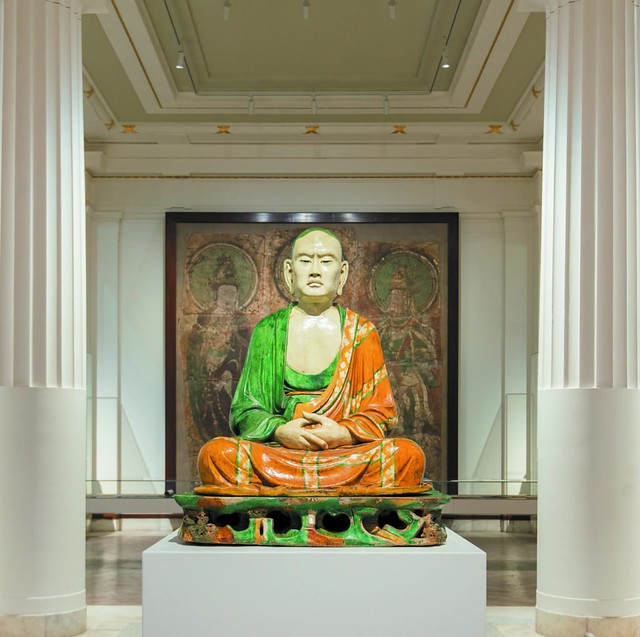 During the British monarch’s visit in November, Sir Joseph was on hand to show her around the jades gallery. “That was a real treat, I didn’t think she would be that interested and spend that much time there. But she did, she walked along much further than I thought she would,” he said. (Mail Online)

Sir Joseph Hotung, a Hong Kong- and London-based businessman, philanthropist, and a former trustee of the museum, whose donations helped fund the cost of the renovation program, described the opening of the refurbished gallery as “very exciting, very magnificent.” (Mail Online)

The expansive exhibits encompass the Sir Joseph Hotung Gallery (Room 33), the Asahi Shimbun Gallery (Room 33a; Amaravati sculptures), and the Selwyn and Ellie Alleyne Gallery (Room 33b; Chinese jades). The renovated space offers improved visitor access to the exhibits, some of which are on display for thee first time.

“With the Percival David collection of ceramics and Sir Joseph Hotung’s jade collection, the British Museum has one of the best collections of Chinese art outside of China and Taipei,” noted Portal. (artnet) “The newly refurbished gallery is a more comprehensive and complete display of our Chinese collections,” observed Fischer, noting that while there are fewer objects on display, the gallery is showing a a much wider variety than before. “It’s much more balanced and representative,” he said. (Global Times)

The New Ancient Religions Gallery at the Asian Civilisations Museum, Singapore
Shifting Stones, Shaping the Past: Sculpture from the Buddhist Stupas of Andhra Pradesh – Book Review