The Buddhist Digital Resource Center (BDRC) and the Internet Archive (IA) recently announced a cooperative project to share an expansive library of Buddhist literature online. According to a public announcement by the IA, the collection represents “the most complete record of the words of the Buddha available in any language, plus many millions of pages of related commentaries, teachings and works such as medicine, history, and philosophy.” (Internet Archive Blogs)

“This is not an academic pursuit,” the IA’s announcement states. “Many Tibetans have left their homeland, spreading to India and around the world. Younger generations who have been displaced and raised in other societies may not have the opportunity to grow up with these traditional teachings. The work of the BDRC is to make those teachings available to everyone.”

The Internet Archive is a non-profit organization founded to build and maintain an online library offering permanent access to digital resources and historical collections for researchers, historians, and scholars. The new cooperation with the BDRC marks the IR’s largest-ever foray into the realm of Buddhist textual preservation and dissemination. 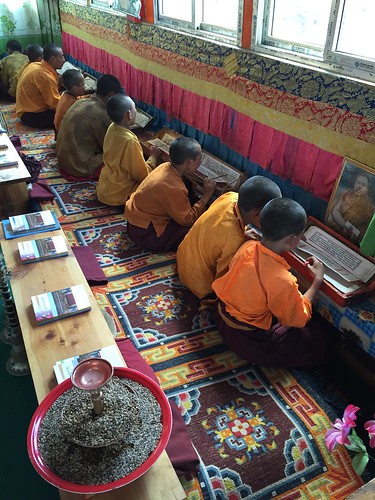 The BDRC was founded in 1999 as the Tibetan Buddhist Resource Center by E. Gene Smith (1936–2010), a student of Tibetan Buddhism, literature, and history, of whom the renowned Bhutanese lama, writer, and film-maker Dzongsar Jamyang Khyentse Rinpoche said, “This man is a true bodhisattva. He has been such a valuable advisor, friend, and inspiration.” (Khyentse Foundation)

Over its 19-year history, the BDRC has stood as an inspiring example of positive achievement through determination and vision, having assembled an online library that today ranks as the most extensive single collection of Tibetan literature in the world. Much of the BDRC’s work has been carried out with the help and support of the Robert H. N. Ho Family Foundation, the Gruber Foundation, and the Khyentse Foundation, a non-profit organization founded by Dzongsar Khyentse Rinpoche.

Headquartered in Cambridge, Massachusetts, the initiative was established with the objective of preserving, organizing, digitizing, and disseminating Tibetan literature. The BDRC has located, digitized, cataloged, and archived some 15 million pages of culturally significant works in Tibetan, while developing cutting-edge technology to ensure lasting preservation and accessibility. The project has resulted in an invaluable collection of digital texts that span more than 1,300 years and includes philosophical and religious treatises, biographies, and works on alchemy, art, astrology, astronomy, folk culture, geography, grammar, history, poetry, and traditional medicine. The project’s goal of digitally preserving the literature and culture of the Tibetan people has already had a profound impact on the future of Buddhism that has far exceeded the scope of its founding. In 2015, its mission was expanded and the BDRC is now tasked with preserving and disseminating all Buddhist literary traditions that remain endangered due to precarious social and environmental factors.

“The founding mission of BDRC is to make the treasures of Buddhist literature available to all on the Internet,” said BDRC executive director emeritus Jeff Wallman, and BDRC executive director Jann Ronis. “We recognize that you cannot preserve culture; you can only create the right conditions for culture to preserve itself. We hope that by making these texts available via the Internet Archive, we can spur a new generation of usage. Openness ensures preservation.” (Internet Archive Blogs)