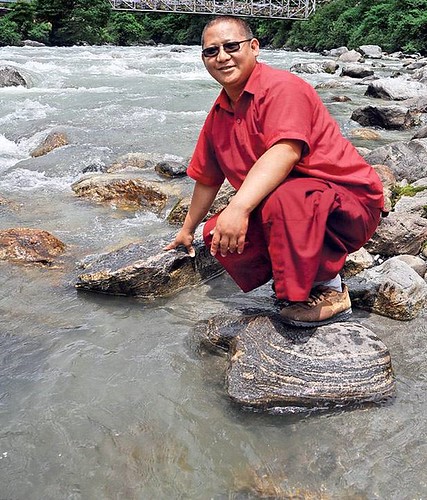 Lama Lobsang Gyatso, a Tibetan Buddhist monk who has been a vocal opponent of hydropower projects in Tawang District of the northeastern Indian state of Arunachal Pradesh, has received the Sanctuary Wildlife Service Award from Sanctuary Asia magazine in recognition of his untiring campaign to save the region’s population of black-necked cranes.

Gyatso received the award at a ceremony in Mumbai on 2 December. It was presented by Usha Thorat, deputy governor of the Reserve Bank of India, in the presence of several dignitaries, including the chief minister of Maharashtra, Devendra Fadnavis, and Sanctuary Asia editor Bittu Sahgal.

The rare black-necked crane is rated as vulnerable on the International Union for Conservation of Nature’s IUCN Red List of endangered species. According to legend, black-necked cranes, which are revered in Tibetan Buddhism and considered a symbol of peace, carried incarnations of the Dalai Lama from monastery to monastery on their backs. However, the state government's decision to build the 780 MW Nyamjang Chhu hydropower project in Tawang, near the crane’s winter habitat upset the local community, who formed the Save Mon Region Federation (SMRF), led by Lama Lobsang Gyatso, to protect the birds and the area’s ecology. A black-necked crane. From planetstillalive.com.

While campaigning against the construction of the hydropower project in April, Gyatso was arrested by police for disturbing the peace. In May, two people were reportedly shot dead by police and seven more injured during a protest by members of the SMRF over the arrest of Gyatso.

“Despite hurdles, [Lama Lobsang Gyatso] and [the] SMRF continue their uphill battle to protect the rivers, wildlife, and culture of Tawang. His work has resulted in many villages in the area adopting Gram Sabha resolutions against destructive projects impacting cultural sites, livelihoods, and wildlife species,” Sanctuary Asia said. (The Arunachal Times)

In his acceptance speech, Gyatso dedicated the award to the memory of his two colleagues who were killed by police. The site of the proposed hydropower project on the river Naymjang Chhu, the winter habitat of the black-necked crane. Photo by Nivedita Khandekar. From indiaclimatedialogue.net

While speaking at the India Climate Dialogue in May this year, Gyatso observed that 13 hydropower projects had been proposed for Tawang. Noting that the SMRF was not opposed to all of the projects, Gyatso emphasized that most of the district’s 31 existing mini- and micro-hydropower plants were either dysfunctional or operating below capacity and suggested that the state government should first ensure that these projects were running smoothly: “Then, of the 13 planned, we can go for at least one . . . and see the impact. Given the fragile seismic zone, there needs to be checks and balances.” (India Climate Dialogue)

Following the social activism of the SMRF, the planned power projects have been suspended and a new environmental study on their impact has been ordered. Although the suspension is only temporary, Gyatso expressed hope that his campaign would be successful.

Palri Buddha Park - A Conservation Project in East Bhutan
Significance of Nature in Buddhism
Perspectives: The Buddha's Law Among the Birds