Buddhist monks at the Russian Academy of Sciences in St. Petersburg. From livemin.com

A team of Buddhist scholars and Russian scientists in the southwestern Indian state of Karnataka have spent two weeks studying a Tibetan lama and other monks in a state of deep meditation known as thukdam (Tib: ཐུགས་དམ་)—a Tibetan term used to describe the meditative state practiced by Buddhist masters during the intermediate post-death period.

Six scientists from Moscow State University and the St. Petersburg-based N. P. Bekhtereva Institute of the Human Brain conducted the trial at the renowned Tashi Lhunpo Monastery in the town of Bylakuppe, which is home to one of the largest Tibetan settlements in India. 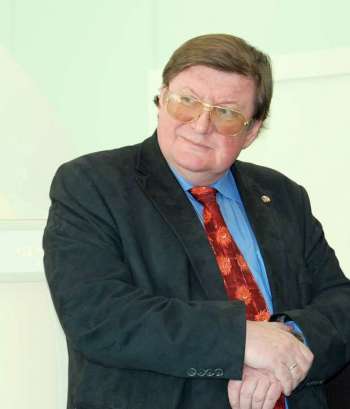 “We learned from lamas of different monasteries that thukdam is not just a post-death meditative state. One can also achieve the same state of mind in one’s lifetime,” said Prof. Svyatoslav Medvedev, founder and former director of the N. P. Bekhtereva Institute of the Human Brain at the Russian Academy of Sciences in St Petersburg. “So we are studying monks who are meditating on subtle consciousness or trying to invoke their subtle consciousness.” (LiveMint)

The team is investigating two aspects of thukdam: “The first is the scientific aspect, to find out how they can stabilize and control the human mind with thukdam being the key factor," said Medvedev, who is leading the delegation of Russian scientists. The second aspect of the study, he explained, is aimed at understanding the neurophysiological mechanism of meditation in relation to the functioning of the nervous system. (LiveMint)

The term thukdam describes an advanced type of meditation in the Vajrayana tradition usually practiced by a Buddhist master during the intermediate or transitional state of death known as bardo. During this period, when biological signs of life have ceased yet the body remains fresh and intact for several days, the master is described as being absorbed in the primordial “clear light stage,” a process of inner dissolution.

“Right now, there are no [scientific] answers to the phenomena of thukdam,” said Ngawang Norbu, head of the Sera Jey Science Center in Bylakuppe. “It’s this mystery that the scientists are here to study. We Buddhists also want to know more about it.” (LiveMint) In the book The Tibetan Book of Living and Dying, author Sogyal Rinpoche explains: The scientists have been working with Buddhist scholars at Tashi Lhunpo Monastery for more than a year to gain a deeper scientific understanding of thukdam. The latest two-week study of monks in deep meditation took place in October at the Talhun Russian Science Centre in the monastery.

“We have been in conversation with the scientists from Russia for two years. Three monasteries in Bylakuppe—Tashi Lhunpo, Sera Jey, and Sera Mey—and four in Mundgod are collaborating with the Russian scientists," said the abbot of Tashi Lhunpo Monastery, Zeekyab Tulku Rinpoche. “This kind of collaboration will lead to better understanding of the human mind and help bridge the gap between Western and Buddhist psychology.” (LiveMint)

During the study, the scientists monitored the brain activity and physiological activity of a meditating monks as they focused on emptiness and subtle consciousness to enter the deep meditative state.

“The research is expected to open the doors to a precise understanding of thukdam,” said Telo Tulku Rinpoche, the representative for His Holiness the Dalai Lama in Russia, Mongolia, and the Commonwealth of Independent States. “It is not a one-time research. We need to continuously observe and study what exactly happens during thukdam. (LiveMint)

Tashi Lhunpo Monastery is seat of the Panchen Lama, the second most important tulku lineage in Tibetan Buddhism after the Dalai Lama. The monastery was originally founded in Shigatse, Tibet, by the first Dalai Lama, Gyalwa Gendun Drup, in 1447. It was re-established in India following the Chinese invasion of Tibet as a center of monastic education and today has a population of some 400 monks.

Inner-fire Meditation with Tulku Lobsang Rinpoche
Welcome to the Bardo
Living with Awareness, Practicing with Intent: An Interview with Yongey Mingyur Rinpoche