California Buddhist Embarks on Environmental Pilgrimage Across the US California resident and Buddhist practitioner Melissa McCarthy has transformed her frustration over humanity’s careless treatment of the environment into a determination to raise awareness through a unique act of social activism—a pilgrimage on foot across the United States. Following the west-to-east convolutions of the historic Route 6, once the country’s longest highway, McCarthy says she has undertaken the task with the parallel intentions of “paying respect to the earth, engaging in conversation about climate concerns with people . . . along the way, and as a healing meditation for . . . my intermittently misanthropic heart.” (One Earth Walk-project)

“We sit here and it’s all green and beautiful,” says McCarthy, voicing her concerns to a local newspaper in Hastings, Nebraska. “This is always sweeping green lawns and trees, and you can’t really wrap your mind around the fact that humanity is really racing to its own extinction at a faster and faster rate.” (Hastings Tribune)

McCarthy, who lived in a Zen Buddhist community in California from 1992–2003 and ordained as a priest in 1998, pulls a 75-pound cart of supplies that includes camping gear, food, water, toiletries, and a change of clothes. Though no longer formally involved with the sangha, McCarthy views walking as an expression of her practice. 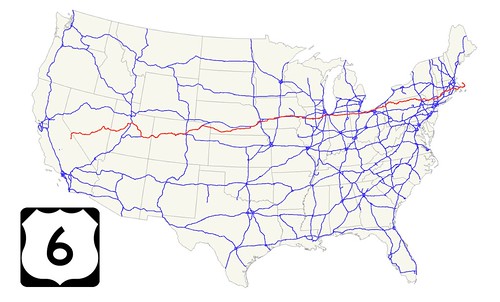 McCarthy's pilgrimage traces the west-to-east convolutions of the historic Route 6,
once the country’s longest highway. From wikipedia.org

The pilgrimage of conscience across the continental US began in spring of 2015, with the help of some financial backing from friends. Four months after she set out, however, McCarthy was laid low by heat and dehydration in Forth Morgan, Colorado, and decided to return to California. “During my months away (late March–July) I was fortunate to enjoy many types of support from a very generous network of friends from home, and people (‘road angels!’) along the way,” she recalls. “Walk days numbered 71, and though it’s hard to be exact on this, the total miles fell somewhere between 1,000 and 1,100, for an average of 15 per day. . . . And although I did skip over a 120 mile stretch (Utah) when temperatures were topping 100°F, and 75 miles to escape a serious lighting [sic] storm (also Utah), I was quite satisfied with my trek over the Rocky Mountains!” (One Earth Walk-project)

This time around, McCarthy has chosen to accept the hospitality of people en route more frequently than on her first attempt, and if the weather looks unfavorable, she often elects to spend the night in a motel. So far, she has only spent a third of her nights camping outdoors. “If you get both wet and cold and there’s no place to get dry or warm, then you could be in trouble,” says McCarthy, who, by increasing the distance she travels each day, hopes to reach the East Coast before early winter. (Hastings Tribune)

McCarthy documents her journey with regular blog updates on her experiences and photos of the sites and people she comes across. Her most recent update on 10 June marks her arrival in Des Moines, Iowa, and celebrates some of the unique and fortuitous encounters while on the road. “One of the best serendipitous meetings was with Orien (pronounced ‘Oren’) who has a small farm dedicated to donating produce and helping disabled adults, kids and physically/mentally wounded veterans, some of whom help with the farm work. He also has . . . a ‘free store’ in his home (available to anyone in need of give-away kid’s [sic] clothing and toys). His many enterprises are volunteer-run, and he holds summer ‘camp’ days for kids and the disabled. . . . He invited me out to the farm, which was a short detour off my route, and I spend [sic] half a day cultivating rows of potatoes, and feeling quite happy to have been able to offer something in exchange for the meals and lodging. Now here, I thought, is a real living Bodhisattva!” (One Earth Walk-project – Blog) 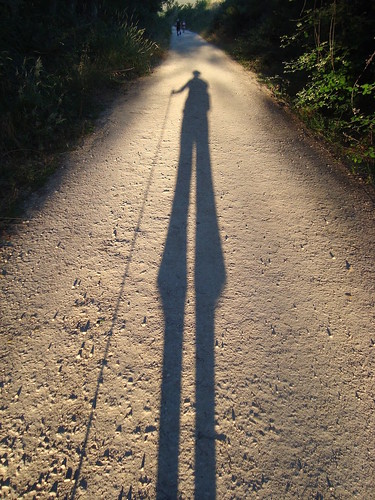 McCarthy views walking as an expression of her practice.
From oneearthwalkproject.blogspot.com

While she feels undertaking the pilgrimage has helped her to feel closer to the Earth, McCarthy remains determined that her journey should promote awareness of the damage being inflicted on the environment by humankind. “It feels . . . as if I want to meet Americans and pay respect to the countryside and the land, and at the same time, express real concern about [the] environment,” she says. “No matter what we do about it, we just need to notice and be aware of what we’re losing.” (Hastings Tribune)