Cambodian Buddhists in Rhode Island Struggle to Cope with COVID-19 The Buddhist monks at Dhamagosnaram Buddhist Temple in Cranston, Rhode Island, are deeply concerned for the future of their temple. As the COVID-19 pandemic continues into the fall, the monks say they’ve witnessed a sharp decrease in temple attendees, which has also led to a decline in much-needed funding.

At the morning service on Sunday, lay attendees Ananda Neou and Yindy Duong offered food and money to a monk at the temple in observance of Pchum Ben, a 15-day Cambodian Buddhist festival coinciding with vassa or the rains retreat observed around the world. This is historically an important time for laypeople to show respect to monastics in honor of their deceased relatives and to gain merit, and Sunday was a day for people to come together as a community.

“We all are [worried] about the temple. If you don’t have donations, how are you going to pay your electricity, sewage. . . . Worst-case scenario, the temple closes,” said Neou. “The monks, they’re scared themselves. They’re losing donations they would normally get.” (Providence Journal)

Cranston, population 80,559, is part of the Providence metropolitan area, yet the temple resides on a quiet country road leading west out of the city. The temple itself is a converted house, complete with a white picket fence that has been updated to blue, yellow, red, white, and orange, representing the colors of the Buddhist flag—which flies from a pole in the front yard alongside the state flag, the American flag, and others.

Sokea Proem, one of the monks residing at Dhamagosnaram, also noted his concern for the temple. “We used to have a lot of ceremonies, like the funeral ceremony, the gratitude ceremony that family members do for their parents or departed ancestors,” he said. “Since the COVID hit, all of those ceremonies were canceled. We have basic needs, so that hits hard.” (Providence Journal)

The loss of ceremonies means a loss of much-needed funding for the temple. Down the road in central Cranston lies America’s oldest Cambodian temple, Wat Thromikaram of Rhode Island. They too have seen a dramatic loss in funding since the pandemic began—as much as a 50 per cent drop in donations.

“For one thing, the people are not really comfortable going into the temple and packing the place like before,” said Wat Thromikaram’s secretary, Samnang Becker. (Providence Journal)

Dhamagosnaram has seen an even more dramatic drop in donations during Pchum Ben, an estimated 80 per cent reduction from past years, according to Phirum Ker, the temple’s president. Ker added that the temple has used savings that had been set aside for construction to cover ongoing bills, but noted that those savings are nearly exhausted. “When I look at the list and see the donations people give, before I’d see US$50, US$70. Right now, I see US$10, US$20, because the people don’t have jobs.” (Providence Journal) 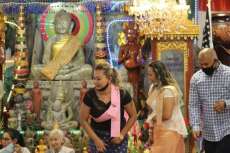 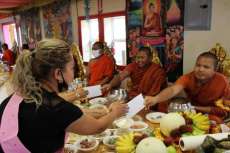 Despite the economic downturn and the continued spread of COVID-19, the temple decided to go forward with Pchum Ben celebrations—albeit with precautions. The temple underwent a deep cleaning before the event and posters were put up requiring attendees to wear masks, with follow-up messages from the monks to remind them of their masks and the importance of social distancing.

Slightly fewer than 100 people attended the celebrations on Sunday, a small crowd for such a celebration in most years, but a bustling day at the temple this year.

For Neou, the gravity of the situation has helped motivate her to both attend and donate.  “People are scared and [many of] the elders aren’t coming because they’re at high-risk [for COVID-19],” she said. “We want to carry on our tradition and our culture even though we [were] raised in America. We want to carry on our parents’, our grandparents’, our ancestors’ traditions.” (Providence Journal)

As at the time of writing, the United States leads the world in total confirmed COVID-19 cases with 6,554,336 infections and 194,530 deaths, according to data from the John’s Hopkins Coronavirus Resource Center. Rhode Island has counted 23,130 of those cases, with 1,075 deaths. While the state was one of many in the US that saw a decline in new cases in May and June as a result of lockdowns and other government restrictions, it has seen a steady rise in new cases since August.