Chatral Sangye Dorje, one of the most eminent and senior Dzogchen (Great Perfection) teachers in the world, passed away on Tuesday morning in Pharping, Nepal, at the age of 102.

On his Facebook page, Dungsey Garab Rinpoche, holder of the Dudjom Tersar cycle of terma, lamented, “Due to lack of our faith in the Dharma, one more Buddha left us again. What a big loss in general and especially to nyingmapa [sic], the greatest master ever.” On his Facebook account, Erik Pema Kunsang wrote, “Chatral Rinpoche, Sangye Dorje, a lion among men, has passed on. He was one of the last living disciples of Khenpo Ngawang Palzang, Vimalamitra in human form. He lived for more than 100 years and saved millions of fish from certain death by setting them free in the ocean outside Kolkata.” 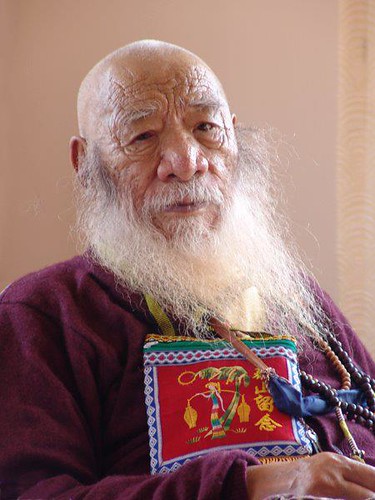 Born on 18 June 1913 in Kham, Tibet, Chatral Rinpoche was a reclusive and highly respected master and one of the few remaining disciples of Khenpo Ngawang Pelzang, holder of the Longchen Nyingthig terma cycle tradition. He studied with some of the most important 20th century figures of the Nyingma school of Tibetan Buddhism, such as Dudjom Rinpoche (1904–87), Dzongsar Khyentse Chökyi Lodrö (1893–1959), and the dakini Sera Khandro (1892–1940).

As a renowned teacher of Dzogchen, Chatral Rinpoche favored strict discipline according to the idea of correct view and conduct as being inseparable. Despite being best known as the holder of the Longchen Nyingthig, he was also closely associated with the Dudjom Tersar cycle of terma. Chatral Rinpoche was a passionate vegetarian and promoted the importance of attending retreats, establishing retreat centers across the Himalayan region.

He wrote prolifically on a plethora of subjects, such as doctrinal apologetics, monastic history, praise, advice, and letters, and much more. In a tribute to Chatral Rinpoche’s life and work before his passing, Khenpo Tendzin Özer noted on the Rangjung website, “. . . there are on the whole a number of volumes equal to the five Buddha families.”

Chatral Rinpoche is survived by his wife Kamala and his two daughters, Tara Devi and Saraswati.

A Biography of the Lord of Refuge, Chatral Sangye Dorje (Rangjung)