The Buddhist humanitarian relief organization Join Together Society Korea (JTS Korea), founded by the renowned Korean Seon (Zen) monk Venerable Pomnyun Sunim, is spreading the warmth of compassion through a US$10,000 project to distribute coal briquettes to vulnerable households across South Korea as the country settles into another cold winter season, when temperatures can sometimes drop as low as –20ºC.

As recently as 30 years ago, lignite coal briquettes were the main fuel for heating and cooking in Korean households, and are still relied upon by some impoverished communities. Due to the outbreak of COVID-19, donations of briquettes for underprivileged families nationwide have dropped to a third of levels recorded a year earlier. 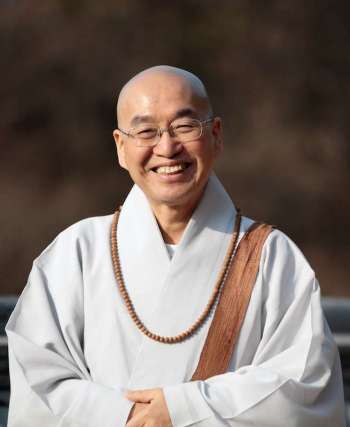 To offset this shortfall, JTS Korea, an international aid organization working to eradicate poverty and hunger through humanitarian relief and sustainable development, is providing vulnerable communities with briquettes provided by the warm hearts of Buddhist donors. Running through to the end of January 2021, JTS’s special outreach project to distribute this much-needed fuel has so far delivered some 9,500 briquettes, each weighing 3.5 kilograms, to: Moongyeong in Gyeongbuk Province (3,000), Cheongju in Chungcheong Province (2,100), the Jongam neighborhood of Seoul (1,400), and Guryong Village on the outskirts of Seoul’s affluent Gangnam District (3,000).

Ven. Pomnyun Sunim joined a team of JTS volunteers on 16 December in delivering briquettes to Guryong Village in Gangnam, a shanty settlement that has been occupied since the 1980s, during the Seoul’s rapid development and modernization. This year the village had received just half of the normal quantity of donated briquettes compared with last year

“This winter has been much colder than usual,” Ven. Pomnyun Sunim told the volunteers. “When I was in middle school, I used to consume only one briquette per day in order to save fuel as people were so poor in those days, and even then the ink would freeze in such a cold room. Today, let’s work hard so that these people have enough briquettes to make their homes warm in this harsh winter.” Volunteers pass briquettes in a hand-to-hand relay line along the lanes of the village. Image courtesy of JTS Korea

The briquettes were delivered by truck to the main road adjacent to the community, then JTS volunteers passed the fuel hand-to-hand in a relay line along the lanes of the village to the assigned houses. Sunim joined in, stacking the briquettes beside the homes of the recipients.

“Upon arriving at Guryong, one of the representative residents greeted us and directed us to the homes that would receive briquettes,” JTS Korea told Buddhistdoor Global. “She told us: ‘We chose the homes of disabled people, those who are very sick, and the elderly, so a total 15 houses will be given briquettes. Everyone here lives in difficult conditions, but these 15 houses are much worse than the rest of us. Thank you for your efforts!’”

Guryong Village is the last remaining squatter community in Seoul and is home to around 1,000 households. While the population of the village has declined in recent years, the central government has pledged to begin a redevelopment project in Guryong by 2025 to provide rented homes for every household there.

“This year has been difficult for so many people because of COVID-19, and the first half of 2021 will be even worse,” said Ven. Pomnyun Sunim. “The spread of COVID-19 will accelerate and become an even graver threat, the number of infections will rise, and the economy will worsen. But positive changes will follow as newly developed vaccines and treatments are distributed around the world in the second half of 2021. As such, I think we can finally begin to see the light at the end of this long, dark tunnel. . . . Please remember as we proceed toward hope, step by step: the darker the night, the closer the dawn.”

Ven. Pomnyun Sunim, a widely respected Dharma teacher, author, and social activist, has founded numerous organizations, initiatives, and projects across the world. Among them, JTS Korea is active as an international aid organization, working to eradicate poverty and hunger, while Jungto Society is a volunteer-based community founded on the Buddhist teachings and dedicated to addressing modern social issues that lead to suffering, including environmental degradation, poverty, and conflict. The warmth of compassion provided by JTS Korea. Image courtesy of JTS Korea

* Sunim is a Korean title of respect for senior Buddhist monks.