The feet for the 54-meter-tall statue of Maitreya on display during a ceremony at Ganden Monastery in Mongolia. From Grand Meitreya Project Facebook

The first phase of the ambitious Grand Maitreya Project, a major Buddhist complex under construction in Mongolia centered around the world’s largest statue of the bodhisattva Maitreya, is expected to be completed this summer with the unveiling in September of a 4.6-meter statue of the historical Buddha Shakyamuni, based on a 17th century design, that will directly overlook the central pagoda and Maitreya image.

Carried out under the auspices of the Mongolia- and US-based Buddhist organization the Grand Maitreya Foundation, construction on the Grand Maitreya Project complex is currently underway at Heart Hill near the Mongolian capital Ulaanbaatar. According to the project’s website, the site has been designed as an educational, spiritual, tourist, and cultural center aimed at contributing to world peace by creating awareness and conditions for loving-kindness to manifest. The centerpiece of the complex will be a 54-meter-tall statue of Maitreya connected with a 108-meter-high stupa.

“The intention is that the size and beauty of this [Maitreya] statue will bring this symbol of love to the attention of many people around the world,” Michael Fouts, executive director of the US branch of the project, told The Huffington Post last year. He added that the site would be “a unique place for all spiritual traditions to come together in peace,” featuring centers representing Buddhist lineages and spiritual traditions from around the world. 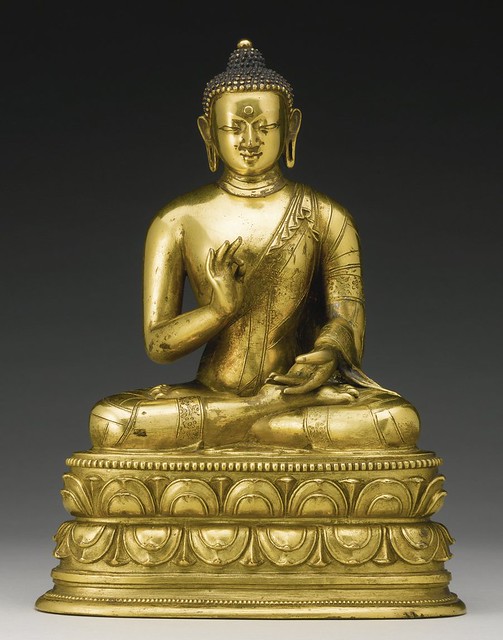 Like the project’s main Maitreya statue, the Shakyamuni Buddha image is based
on a 17th century design by Mongolia’s first Jebtsundamba Khutuktu. From
GrandMaitreyaWest Twitter

Like the Grand Maitreya Project’s main Maitreya statue, the statue of Shakyamuni Buddha to be completed this year is based on a design by Mongolia’s first Jebtsundamba Khutuktu,* Öndör Gegeen Zanabazar (1635–1723), Mongolia’s most influential spiritual leader. The project’s spiritual advisors have noted that it will be more auspicious and beneficial to complete the statue of Shakyamuni Buddha before the main Maitreya image.

In 1640, Zanabazar was recognized by the Panchen Lama and the 5th Dalai Lama as the incarnation of the scholar Taranatha of the Jonang school of Tibetan Buddhism. While in Tibet, Zanabazar mastered the art of bronze casting and returned to Mongolia to start what would later come to be known as the great Mongolian artistic renaissance. Zanabazar is credited with creating numerous Buddhist works of art, including sculptures of the female bodhisattva Tara, Amitabha Buddha, and Shakyamuni Buddha. Zanabazar had a keen interest in Maitreya writing in detail on the bodhisattva and sculpting many statues.

Maitreya, recognized by most Buddhist traditions as a future Buddha of this world, is also known as the Buddha of Loving-Kindness. According to the Grand Maitreya Project, His Holiness the Dalai Lama and several noted rinpoches have donated relics of the Buddha and other holy items to be enshrined inside the Maitreya statue and the accompanying stupa.

The project is also viewed as a way for Mongolia to reconnect with its spiritual roots after the turbulent decades of the 20th century. In 1924, the Mongolian People's Republic was declared a Soviet satellite state, and for much of the 20th century, Mongolia’s communist government repressed religious practices in the country. In the late 1930s, the regime shut down almost all Buddhist monasteries and killed tens of thousands of people, including some 18,000 Buddhist monastics. The number of Buddhist monks declined from an estimated 100,000 in 1924 to 110 by 1990.

Following the fall of communism in 1991, Vajrayana Buddhism, which had been the country’s predominant religion, again rose to become the most widely practiced religion in Mongolia. According to national census data for 2010, 53 per cent of Mongolians identify as Buddhists. Muslims represent 3 per cent of the population, the Mongol shamanic tradition 2.9 per cent, Christians 2.1 per cent, other religions 0.4 per cent, while 38.6 per cent have no religious affiliation. Khamba Lama Gabju, Supreme Head of Mongolian Buddhists, on the Buddhist Revival in Mongolia
Fusion Art on the Move: The Mongolian Melting Pot